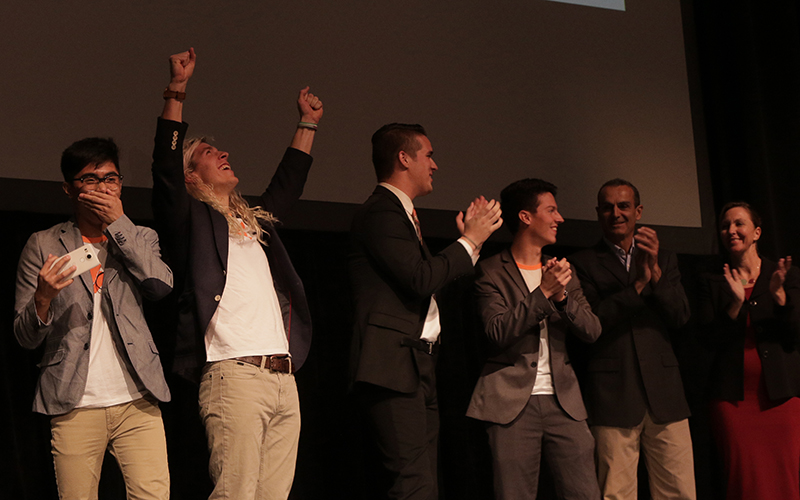 Storage Together won Phoenix’s Smart City App Hack event last week, beating out four other startups. They won $3,000 and will now take their idea to Barcelona, Spain, to compete in the international event. (Photo by Gavin Maxwell/Cronkite News) 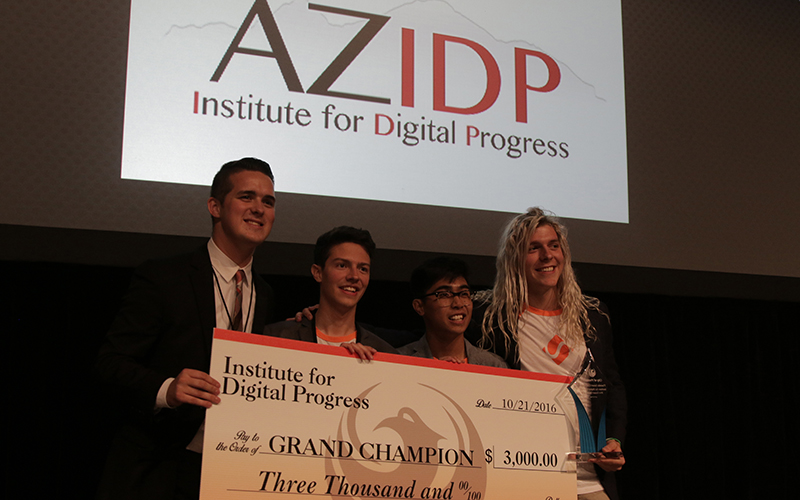 The team from Storage Together won this year’s Smart City App Hack competition in Phoenix. They founded their company after meeting at Grand Canyon University. (Photo by Gavin Maxwell/Cronkite News) 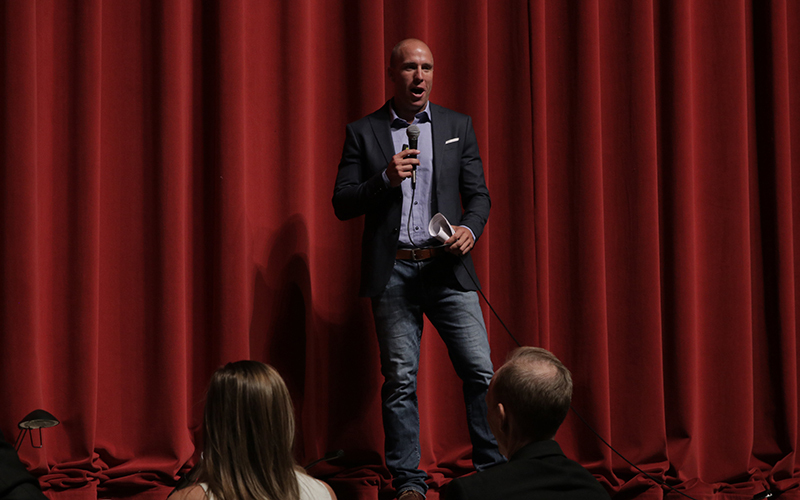 Dominic Papa, the co-founder of the Arizona Institute for Digital Progress, addresses the audience while the judges make their decisions at Phoenix’s Smart City App Hack event in October. (Photo by Gavin Maxwell/Cronkite News)

There must be an easier and cheaper way to do it, said Woods, a 20-year old business administration major.

So the group developed Storage Together, a startup company that takes Uber’s “sharing economy” idea and applies it to self storage.

The team took its concept to Phoenix’s Smart City App Hack event last week, and they beat out four other Phoenix-based startups. They won $3,000 and will now take their Storage Together idea to Barcelona, Spain, to compete in the international event, which brings together entrepreneurs from around the globe to solve civic issues.

Phoenix took part in the competition for the first time in 2015 after the Arizona Institute for Digital Progress arranged a partnership between the city and international Smart City App Hack organization.

“There were really two goals. We want to build better, smarter, more resilient cities by empowering our entrepreneurs to create these solutions,” said Dominic Papa, a founder of the Institute for Digital Progress. “We also want to help these entrepreneurs to scale their product and bring it around the world.”

The council in Barcelona will focus on finding ways to implement these solutions within cities and for real world scenarios.

At Friday’s local competition at the Orpheum Theatre, the contestants included teams of college kids and former engineers and highlighted ideas that ranged from an air-pollution monitoring device to a virtual assistant designed for students.

A panel of judges from the Phoenix startup community and members of the audience evaluated the teams.

Each team presented their product or service and addressed questions from the panel and audience.

With Storage Together, “hosts” can advertise available storage space in their home or on their property and a user can rent that space directly from the host. This may provide a cheaper alternative to sometimes-pricey storage facilities, and it gives hosts new sources of income.

The team from Storage Together is now preparing for Barcelona.

“Turnaround time for Barcelona is only a couple of weeks, so we are really grinding right now to get ready,” Woods said. “We want to advance our product, which means a lot of late nights perfecting our pitch.”

In addition to the pitch competition, the Institute for Digital Progress also announced a partnership with Cox Communications and US Ignite to promote entrepreneurs in the Phoenix area. Cox will provide $300,000 to the institute for programs similar to the app hack event or other plans that will benefit the entrepreneurial community.

The funding and partnership are a part of the Smart Gigabit Communities Initiative.