Voters wait in line outside a polling place in Tempe during the presidential preference election, when widespread problems resulted in hours-long waits for many in Maricopa County. (Photo by Grecia Drabos/Cronkite News) 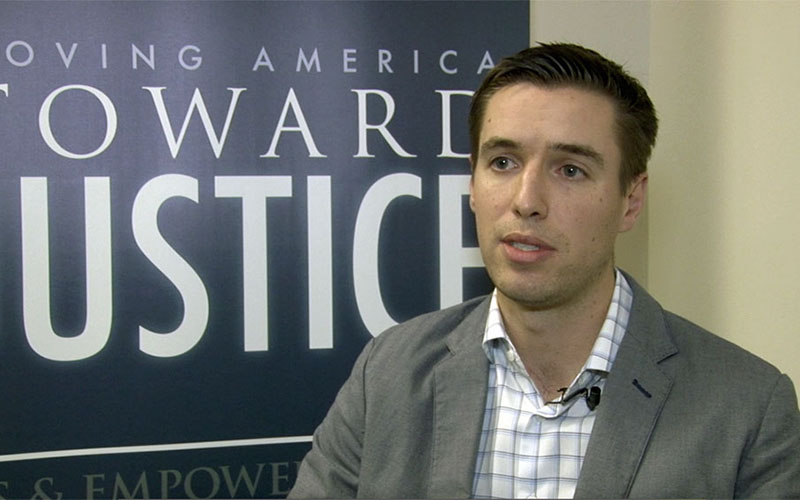 Brendan Downes, a lawyer with the Voting Rights Project of the Lawyers Committee for Civil Rights Under Law, called the Maricopa County voting plan “an enormous win for the entire county.” (Photo by Adam DeRose/Cronkite News)

WASHINGTON – Voting rights advocates Thursday lauded the final approval of a plan aimed at cutting lines and reducing wait times to no more than 30 minutes at polling places across Maricopa County, beginning with the Nov. 8 presidential election.

The comprehensive Wait Time Reduction Plan settles a lawsuit against election officials that followed problems in the March presidential preference primary that left some waiting for hours to cast a ballot, in effect disenfranchising voters in the county.

“It’s an enormous win for the entire county, all the registered voters of the county, especially people who prefer to exercise their vote on Election Day,” said Brendan Downes, associate counsel for the Voting Rights Project of the Lawyers Committee for Civil Rights Under Law. The committee filed suit on behalf of county voters.

The plan was posted earlier this month on Maricopa County Recorder Helen Purcell’s website, but was not officially signed off on by all the parties until this week. A Purcell spokeswoman said the office had no additional comment on the contents of the plan after Thursday’s settlement.

The plan is set to be included in poll workers’ manuals for next month’s elections and shared with number of Arizona voting rights groups and the public. It will remain in effect for all primary and general elections through 2020.

It calls for voter turnout projections for each polling place across the county, and outlines how to deal with turnout if it exceeds anticipated numbers. It also designates roles for officials, poll workers and troubleshooters to make sure wait times do not exceed 30 minutes and what to do if that occurs.

“After what happened in March you probably had a lot of people who were thinking, ‘I can’t show up at the polls maybe ever again, because I just don’t have confidence in my government that they’re going to do this the way it needs to be done,'” Downes said.

The reduction violated the constitutional rights of voters who had to wait hours, in some cases, to cast a ballot, the suit said.

Polls then were set to close at 7 p.m., but a number of locations remained open until 10 p.m. as voters filed in to cast their ballots. Five polling places were open past midnight. Other voters were unable to vote all together, the group claimed.

“One of our clients is disabled, had arranged for her ride to come two hours after she arrived at the polling place, was unable to vote in the meantime and was effectively disenfranchised,” Downes said. “It ended up being this calamitous occasion.”

Downes called the agreement an opportunity to restore voters’ faith in the election process.

After the Supreme Court struck down parts of the Voting Rights Act in 2013, Downes said, Maricopa County was no longer subject to federal review of changes to the election process to ensure that they did not disproportionately affect nonwhite voters.

Downes said that meant officials were not required to “pre-clear” these polling place reductions with the Justice Department, though 60 percent of the state’s minority population resided in the county. The settlement, though not a replacement for the parts of the Voting Rights Act that were voided, attempts to address those concerns.

“We certainly hope that this lawsuit and this settlement make things easier, the voters are owed that. Their government owes that to them,” Downes said.