PHOENIX – Piggly’s Barbeque, one of nearly 100 vendors at the Arizona State Fair, will use 40 to 50 gallons of cooking oil every day to make their Piggly Fries and other fare.

After fair customers buy and enjoy fried foods, the oil used isn’t going to waste. Biotane Pumping Company picks up the oil to recycle it into biodiesel, a cleaner-burning fuel alternative to gasoline.

“Anything that we can recycle to keep from going in our landfills helps us all out,” said Ryan Parsons, operations manager for Biotane Pumping in Arizona.

Parsons said they’ll collect about 1,000 gallons of used cooking oil each week. Last year, he said they collected 4,100 gallons during the four weeks of the fair.

“I love it, I love it a lot,” said Craig Sawyers, owner and operator of Piggly’s Barbeque. “They’re doing a great job. It’s great for the community, great for our environment.”

Piggly’s and the other 93 food vendors cook with oil for two to three days, then pour it into one of about two dozen receptacles distributed around the fairgrounds. Biotane Pumping picks up the used oil when the fair is closed on Mondays.

Piggly’s expects to go through about 1,000 gallons by the time the fair at 19th Avenue and McDowell Road in Phoenix ends Oct. 30. 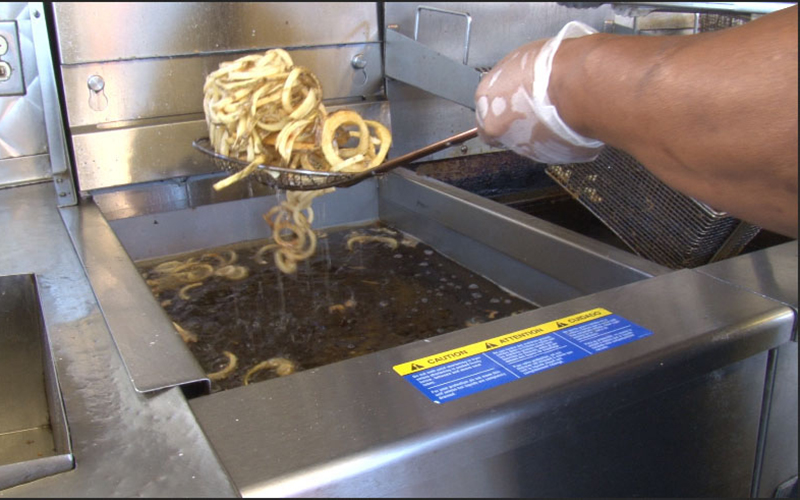 After a couple days of being used to make Piggly Fries, the vendor takes the oil from the deep fryer to be recycled into fuel. (Photo by Natalie Tarangioli/Cronkite News)

Fred Rodriguez, one of the cooks at the Piggly’s stand, is pleased Piggly’s and other fair vendors recycle the used oil.

“I figure we get something out of oil,” Rodriguez said. “I think we should recycle it.”

The oil Biotane Pumping collected from Arizona fairs last year equaled the removal of 40 metric tons of smog emissions and taking 108 cars off of the road, according to the company’s website. Parsons said the number of gallons collected in live time and the conversion rate to number of emissions reduced and number of cars taken off the road is available on its website.

“All of the food here has a definite purpose in helping the environment and converting that into a renewable fuel,” Parsons said.