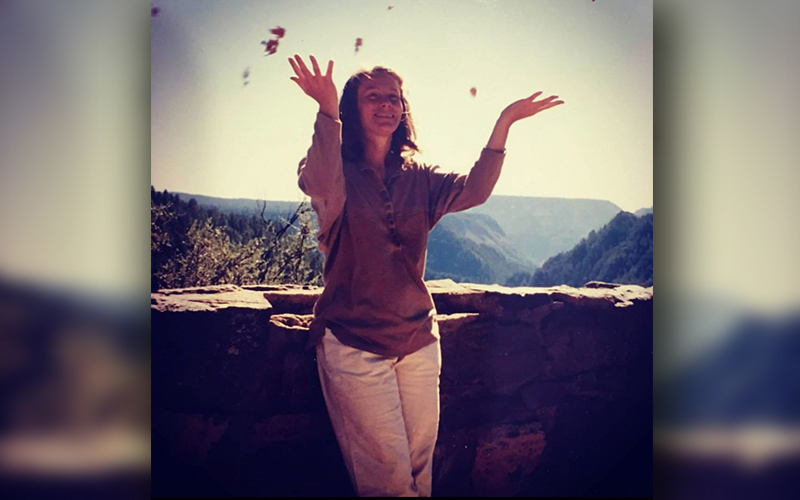 Debra Hartin enjoyed the outdoors most of her life. (Photo courtesy of Sherrie Hartin-King) 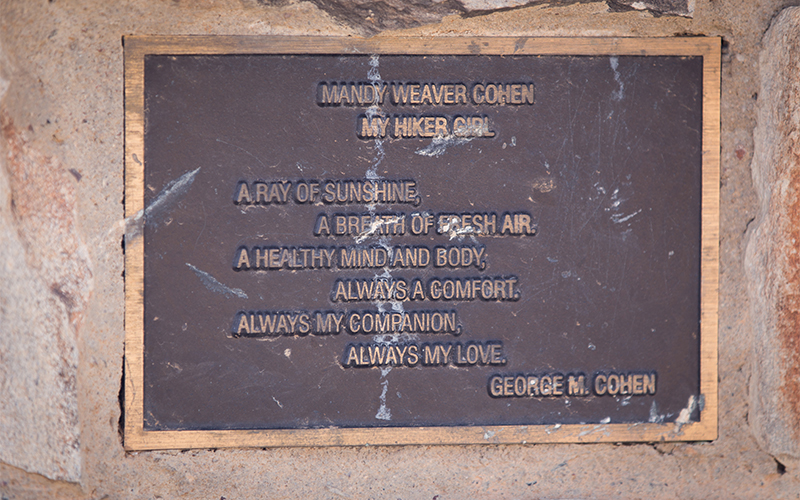 A plaque engraved in a memorial bench along the Nature trail at Piestewa Peak, part of the Phoenix Mountains Preserve. (Photo by Ryan Dent/Cronkite News) 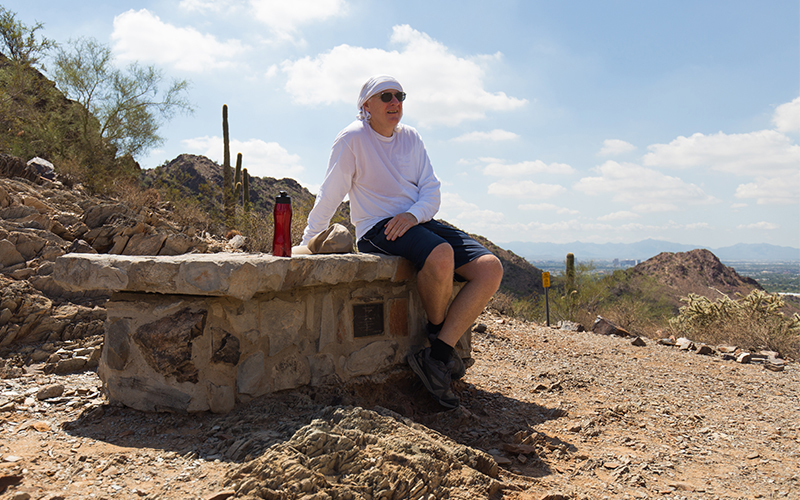 Stephen Nally took a break on the Nature trail in Piestewa Peak, part of the Phoenix Mountains Preserve. (Photo by Ryan Dent/Cronkite News) 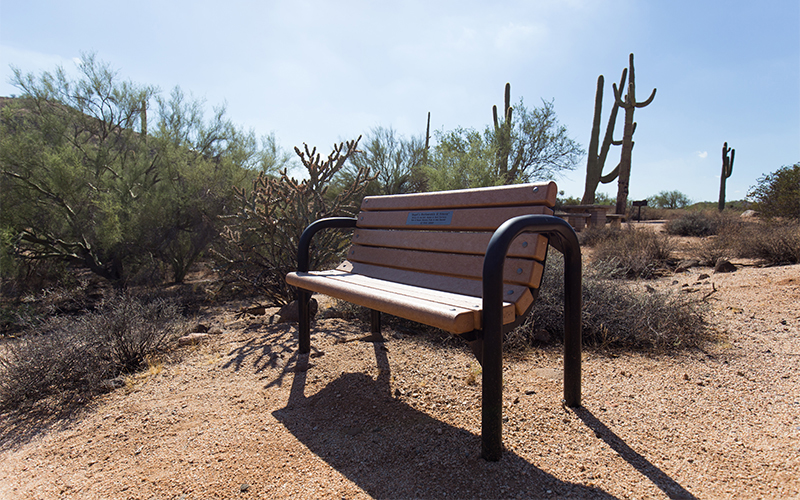 MESA – Debra Hartin’s family remembers a woman who lived her life fiercely, with few limits. She rowed canoes in the Minnesota wilderness, her clothes drenched from rain. She swam in a triathlon, sharing the running and biking with her sister and niece. She hiked trails in Usery Mountain Regional Park — her favorite park in the Valley.

The adventures stopped one day in May, when the 58-year-old fell while mountain biking in Arizona. A blood clot formed in her leg. She died after surgery in July.

Three days after her funeral, a few family members hiked along the Wind Cave trail at Usery. They saw benches, built of stone or hard plastic, engraved with words memorializing deceased loved ones.

There, they shared an idea: We need a bench for Debra.

Memorial benches offer respite for hikers at parks throughout the Phoenix metro area. Maricopa County Parks and Recreation offers them at regional mountain parks, like Usery Park in the southeast Valley and White Tank Mountain Regional Park in the West Valley. Some cities, including Phoenix and Scottsdale, have benches but have stopped the program, according to their websites.

The benches, made of stone or hardened plastic, are marked with a memorial plaque to reflect a loved one’s spirit and the person’s relationship with nature, said Dan Harris, park supervisor at Estrella Mountain Park.

Some of them refer to the loved one’s past-time, like one in the White Tank Mountains about a man named Ray Poff: “He liked to ride a good horse on a long trail — now he rides a great horse on the trail that never ends.”

Some are recent, and others are from long ago. All came to be after someone who loved them left something behind in their name.

A memorial bench dedicated to Mandy Weaver Cohen is along the Nature trail in Piestewa Peak, part of the Phoenix Mountains Preserve. Click and drag image for 360 degree view. (Panoramic by Ryan Dent/Cronkite News)

Stephen Nally, a Scottsdale resident, caught his breath at a memorial bench along the Nature trail on a September morning at Piestewa Peak, part of the Phoenix Mountains Preserve.

“I always look at the memorials and wonder who the people were,” Nally said. “They obviously hiked here. It’s a spiritual experience for me.”

“Deb grew up in New Brighton, Minnesota, in proximity to me and the rest of my family. After high school, she moved to Arizona to pursue a college education and a life full of adventure. She visited frequently, and we gathered at our grandparents’ house for quality family time. The young and wily Deb would teach my siblings and I songs and dances while hopping around the house howling at the top of our lungs. Meanwhile, my grandma would be grumbling, ‘Every time you come home, you get these kids all riled up!'”
– Sherrie Hartin-King, Debra Hartin’s niece.

There are no apparent Arizona regulations or official county standards to limit the number or placement of benches. Park supervisors decide where to place a bench so it has little environmental impact on the desert, said Dawna Taylor, spokeswoman for the county parks department. Maricopa County Parks and Recreation Department.

Park supervisors try not to overpopulate trails with benches, Taylor said. If a supervisor feels a trail has exceeded its number of benches, environmental impact being the standard, he or she will work hard to find a different location.

“Before trails are developed, an environmental assessment is completed to ensure the trail doesn’t disrupt any cultural or natural resources,” she said.

Park supervisors have the final say but do their best to avoid removing cactus or plants, she said.

There have been instances where sage bushes and grass have been removed, said Harris, supervisor at Estrella Mountain Park.

Cities that had memorial programs for recreation areas, such as Scottsdale and Phoenix, also set their own policy.

But Phoenix officials decided there can be too many memorial benches and discontinued the installation of trail benches 12 years ago because they were overrun with requests, said Rick Plautz, a former Phoenix park supervisor who now works with the county parks system.

“It’s an effort to maintain the natural beauty of the preserves,” Phoenix Parks and Recreation spokesman Gregg Bach said in an email.

Scottsdale officials discontinued its Tree and Memorial Bench Program in December 2015, according to their website.

Arizona State Parks don’t have an official program like Maricopa County, said Glenn Schlottman, chief of marketing, although they have placed benches on a “per park basis.” He said the park manager and development team will construct benches based on who it’s dedicated to, the materials proposed for a memorial and how it relates to the park.

The state plans to build a memorial park dedicated to the 19 Granite Mountain Hotshots who died June 28, 2013 in the Yarnell Hill Fire.

“Seven of us, including Debra, departed on a long camping trip in (Minnesota’s) Boundary Waters Canoe Area Wilderness. One day Deb and Julie were paddling together quickly approaching rapids. With no time to adjust, the canoe collapsed and all our gear got soaked. For the next three days, the rain didn’t stop, giving no one the opportunity to dry their clothes or gear. While wet and miserable, we voted on whether or not to go home early. The thought of clean, dry clothes had my excitement and relief sky rocketing. But Debbie would have no part of it. ‘Kathy and I vote to stay,’ she shouted.”
– Kathy Danger, Debra Hartin’s sister.

Getting a memorial bench

People can apply for a memorial bench directly at a Maricopa County regional park or print the online version of the application and mail it in.

Most applications are approved if space is available in a park, said Dan Wilson, park supervisor at Usery Mountain Regional Park. The park supervisor and purchaser must agree on a location.

A private company takes about three months to build a bench, which costs about $900 and is made of recycled plastic and steel pipes or stone.

Other memorial options are picnic tables and ramadas.

“In addition to her mischievous side, she had a generous heart. When we were little, I would get sick and she could hear me…She insisted I lay in her bed while she cleaned up my mess and changed my sheets. She always told me not to worry, and that she would take care of it. And she always did.”
– Kathy Danger

Hartin’s bench will placed along the Vista Trail at Usery Mountain Regional Park in early November. The sentiment will read: