Sempra U.S. Gas & Power has contracted with the Navy and Department of Energy to provide power to military bases in California from a solar facility in Tonopah. (Photo by Gavin Maxwell/Cronkite News)

But they weren’t there to talk about the massive Palo Verde nuclear plant, the largest power producer in the country. Instead, these officials stood in front of solar panel fields that spanned the desert horizon.

San Diego-based Sempra U.S. Gas & Power owns the Mesquite Solar Complex, which stretches across a 4,000-acre swath of Sonoran desert. As the officials spoke, the midday sun created mirages across the rows of solar arrays.

The U.S. Navy and Department of Energy has contracted with Sempra in the largest purchase of renewable energy ever made by a federal entity. Sempra hosted the Navy and its partners to celebrate the contract with a ceremonial flipping of the “switch” on Oct. 14.

Moving toward a sustainable energy future in the U.S. has been a priority of the current administration. With this contract, the federal government took a step toward that goal.

Sempra announced the facility will provide power to 14 Navy and Marine Corps bases across California, supplying about one third of the total power needed for the bases.

“This ceremony marks the completion of one of the first, and most monumental, renewable energy projects undertaken by the Navy,” said Dennis V. McGinn, assistant secretary of the Navy for energy, installations and environment. “Navy and Marine Corps installations will be getting more than just clean renewable power. They will be getting increased energy resiliency and security, which is crucial to maintaining mission readiness.”

Sempra officials said the contract will save the federal government tens of millions on energy costs and reduce greenhouse gas emissions by 321,000 tons annually, or the equivalent of taking 67,500 cars off the road. 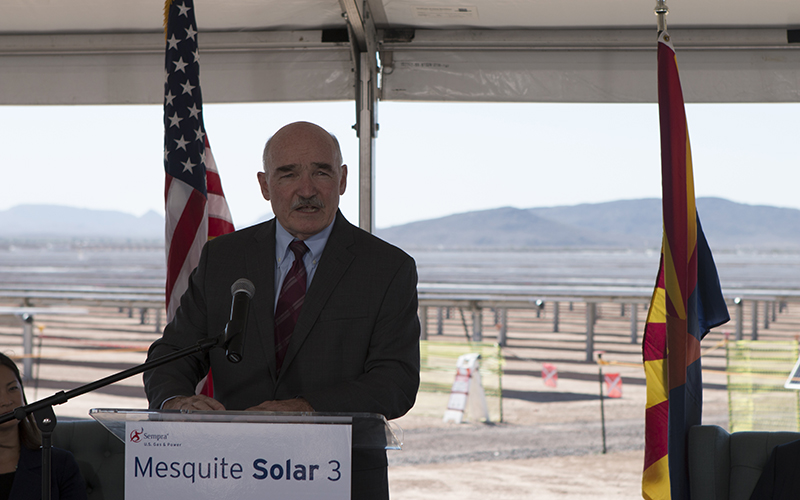 Assistant Secretary of the Navy for Energy Installations and the Environment, Dennis V. McGinn speaking at the ceremony. (Photo by Gavin Maxwell/Cronkite News)

The plant is scheduled to come online in four stages. The first group of solar panels is up and running and the other three should come online by the end of the year. Once it is fully operational, the facility will send 210-megawatt hours of electricity to the bases in California, enough electricity to power roughly 69,000 homes, according to Sempra’s website.

This plant will supply power to naval bases running a variety of operations, from SEAL training to F-18 fighter operations.

As a part of its strategy to diversify its energy portfolio, the Navy took bids from solar energy providers and consulted with the Western Area Power Administration to assess applications.

A switch to solar and other alternative energy sources for armed forces represents the federal government’s interest in transitioning into a low carbon economy. Agreements like this help drive the nation’s energy future, said Kevin Sagara, senior vice president and president, renewables, of Sempra.

“The Navy came up with the idea. They wanted renewable energy. They see it as resilient, and they see it as sustainable,” Sagara said.

The contract covers a 25-year term and provides price stability for the Navy, while creating jobs for Arizonans and the Tonopah community, officials said.

Sempra estimates that during expansion efforts, the Mesquite Solar Complex will create 800 construction jobs at its peak. It also will generate a number of permanent engineering and maintenance positions.