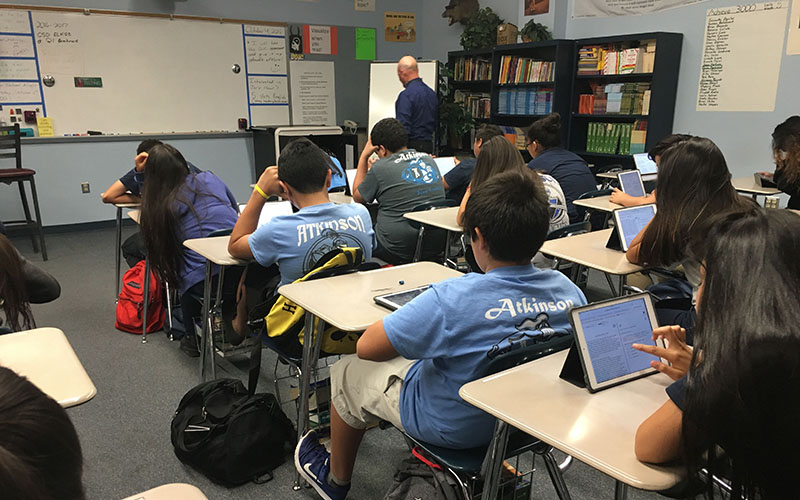 Kristan Kurtz predicts about 90 students in the Cartwright School District will be enrolled in Academy for Success by December. (Photo by Keerthi Vedantam/Cronkite News)

PHOENIX – The building next to Starlight Park Elementary School looks like it belongs there. The fence in front boasts a colorful sign declaring it’s proud to be a drug-free school, the water fountains are inviting low enough for the children running around the playground.

But the building houses a different reality.

Many of the children inside, from kindergarteners through 8th graders, face serious issues that lead to habitual absenteeism. The center they attend, after being transferred there from another school in the Cartwright School District, tries to turn truants into successful students.

“Our goal is to get all of our kids back on their home campus,” said Kristan Kurtz, director of Safe Schools and Academy for Success. “It does not happen with every student, but that is our goal.”

The center offers alternative-education programs to students in the Cartwright district who have mental disabilities, cause disturbances in classrooms or face suspension.

The Department of Education defines chronic absenteeism as missing 10 percent of the school year. In a 180-day school year, that means missing 18 days of school. In the 2013 school year, at least 30 percent of students in 18 Arizona school districts in Arizona were habitually absent.

The Cartwright school district does not have a program designed specifically for truant students, in part because chronic absenteeism is a result of other problems occurring at home or at school.

“Kids go through a lot of trauma that we don’t even know about,” Kurtz said. “Whether it’s a single-parent home, incarcerated parents, any type of drugs in the house…they live in a pretty high crime-rate area.” 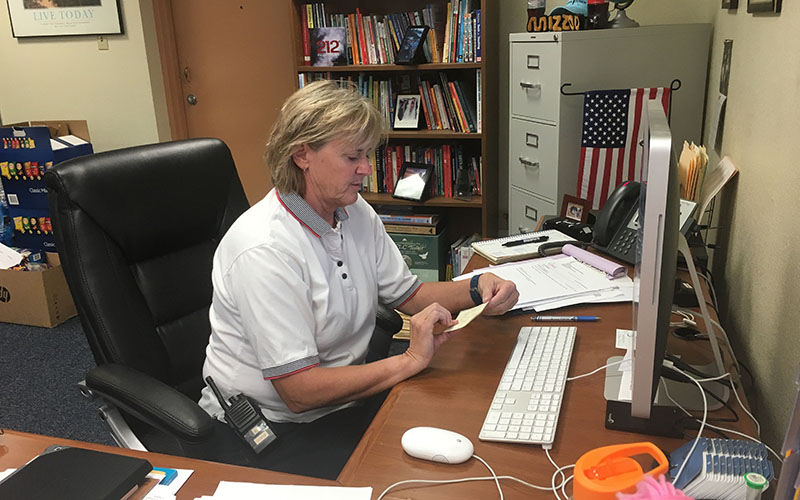 Kristan Kurtz, Academy for Success director, has been working in education for 32 years. She was a principal at Starlight Park Elementary for six years before transfering to Academy for Success. (Photo by Keerthi Vedantam/Cronkite News)

Academy for Success caters to students who are prone to emotional disturbances in the classroom and are habitually truant.

A girl who was in kindergarten approached Kurtz, who was walking around the school, boasting about her new accomplishment:

“I only got into trouble two times today.”

That’s an accomplishment in a center where children have to follow strict rules that focus on certain behaviors, such as how to accept “no,” or deal with anger without flailing at authority. The rules students have to follow often are much different than those traditional schools.

Even 7th and 8th graders have to be accompanied by an adult to use the restroom. Students can’t bring backpacks, phones and pencils to the academy. They are assigned seats during lunch.

“It’s very much about teaching what the expectation would be above and beyond,” Kurtz said. “When they do go back to their home school, those redirections…they can handle that.”

Kurtz greeted her students as she walked around the center and reminded them to follow directions. One boy was told to tuck in his shirt. Another stopped standing too close to his classmate. The kindergartener who bragged about staying out of too much trouble learned to ask for permission to hug before giving one.

Valley of the Sun United Way, which works with students on combat chronic absenteeism, is helping school districts like Balsz and Isaac elementary school districts figure out why students are chronically absent.

“Kids feel like they’re not learning, and they get behind everyday they don’t go,” said Joyce Lopez-Powell, education director at the United Way. “They lose more and more opportunities to learn.”

Many students who end up at the academy have fallen behind in their grades.

“It’s unfortunate we have 8th graders reading at a 2nd grade level,” Kurtz said. “Of course there’s going to be behaviors and frustrations and anger.”

Lopez-Powell said Balsz wants to encourage parents to be more involved in their student’s academic success. She called it a cost-effective way of taking care of children needs.

“A child will succeed if they have a caring adult that they know is in their corner,” Lopez-Powell said.

The Academy for Success has faculty who show care. They visit students at home. They allow children to arrive in pajamas and change into their uniforms at the academy.

“We’ll put systems in place to help reward them for getting here, to let them know we need them here,” Kurtz said. “It takes a lot of time, but we have seen attendance improve.”