Tribal leaders dress President Barack Obama in traditional Native American garb before his remarks to the eighth annual conference of tribes organized by his administration. (Photo courtesy the White House) 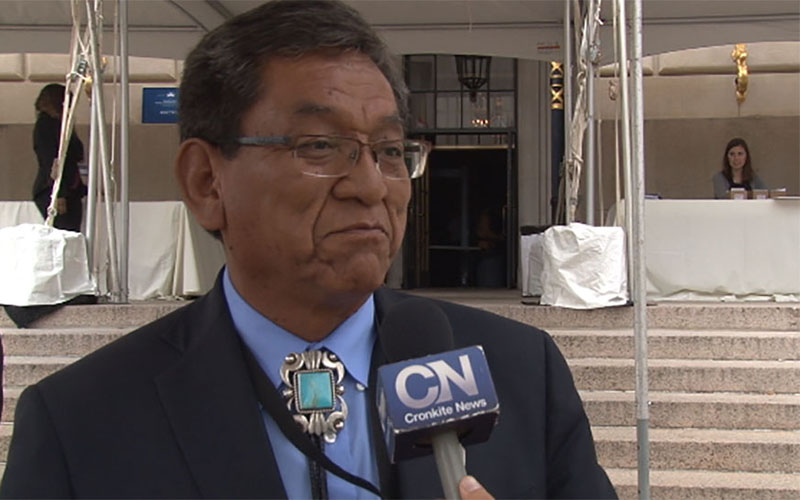 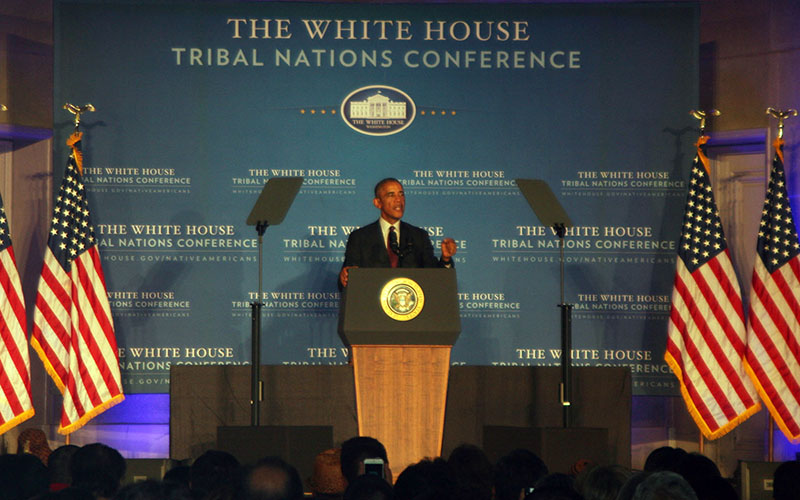 President Barack Obama told tribal leaders that they had not “solved every issue” or “righted every wrong” but that they had made great progress on problems in Indian Country. (Photo by Allie Bice/Cronkite News) 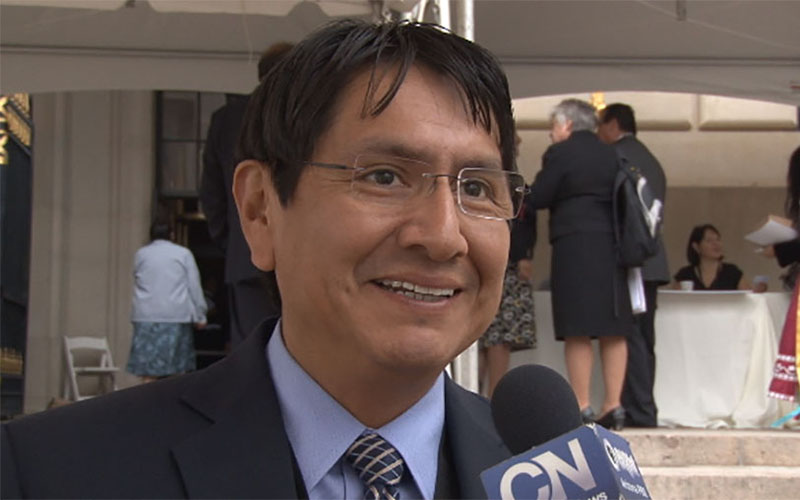 WASHINGTON – President Barack Obama told tribal leaders Monday that they and his administration had come far since he took office eight years ago, but that there is still work to be done to solve problems in Indian Country.

“We haven’t solved every issue, we haven’t righted every wrong,” Obama told the hundreds gathered for the 2016 White House Tribal Nations Conference. “But together we’ve made significant progress in almost every area.”

Obama promised to keep working with tribes even after he leaves office – while tribal officials said they will look closely to see if the next president continues what they consider to be a productive relationship that has developed with Washington under this administration.

National Congress of American Indians President Brian Cladoosby said the Native American community was “fortunate to have a president like President Obama.”

“There’s no guarantee that going forward that we will have the same commitment from the next administration,” Cladoosby said in his remarks. “Or they will make the same commitment to continuing to bring us together, or continue to look towards the gains that we could possibly make in the next eight years that we have made in the last eight years.”

The comments came at the eighth and final tribal conference under Obama, who started the meetings when he took office. The annual meetings are open to representatives of all 567 federally recognized tribes, bringing them together with White House and Cabinet officials for a day of meetings.

Monday’s conference included secretaries of Agriculture, Interior and Housing and Urban Development as well as officials from the Justice Department, the White House – and the president.

Looking back over the eight years of conferences, Cladoosby said the current administration “set the stage” for further advancements with tribal nations. Other tribal leaders at the conference gave Obama high marks for his work with tribes and respect for tribal sovereignty.

“They’ve done great strides in the eight years that President Obama has been in office,” said Navajo Nation Vice President Jonathan Nez. “Previous administrations didn’t really get out to Indian Country as much.”

Nez said the current administration has had a “better understanding” of Indian Country than “lot of the former presidents.”

Tribal leaders and Obama both listed what they see as gains in recent years, including reauthorization of the Violence Against Women Act to include assaults on Native women, a $1.9 billion program to help tribes buy back fractionated land, expansion of tribal court jurisdiction and designation of a White House Council on Native American Affairs, among other efforts.

Navajo Nation President Russell Begaye said the Obama legacy will be a “desire to honor treaties and the trust obligation (to tribes) that the U.S. government has taken upon themselves.”

“One of the hallmarks of this administration is to know that the president reached out to Indian tribes … directing federal agencies to respond to the needs of Indian people and Indian nations has been so significant,” Begaye said.

Cladoosby said the strengthened relationship between tribal nations and the government shouldn’t be taken for granted.

But Obama said he is optimistic about continued progress with the next administration. And, he said, he will continue to help relations with Indian Country after his term.

“Even after my time in this office comes to an end, I’m going to be standing alongside you because I believe that, yes, our progress depends in part, on who sits in the Oval office and whether they’re setting the right priorities,” he said.

“But lasting progress depends on all of us, not just who the president is,” Obama added.

Nez confessed that he is pulling for Democratic nominee Hillary Clinton, whom he called a friend of the Navajo Nation.

“I’m looking forward to a Clinton administration, if I can say that, because I think Hillary will continue the momentum that President Obama has done for Indian Country,” Nez said.

Nez and Begaye both said they would be looking to Monday night’s presidential debate for clues on how Clinton or Republican nominee Donald Trump will lean.

“We will be listening to the debate,” Begaye said. “And we want to see if one of them really understands clearly what it means, government-to-government, nation-to-nation, responsibility and treaty obligations.”