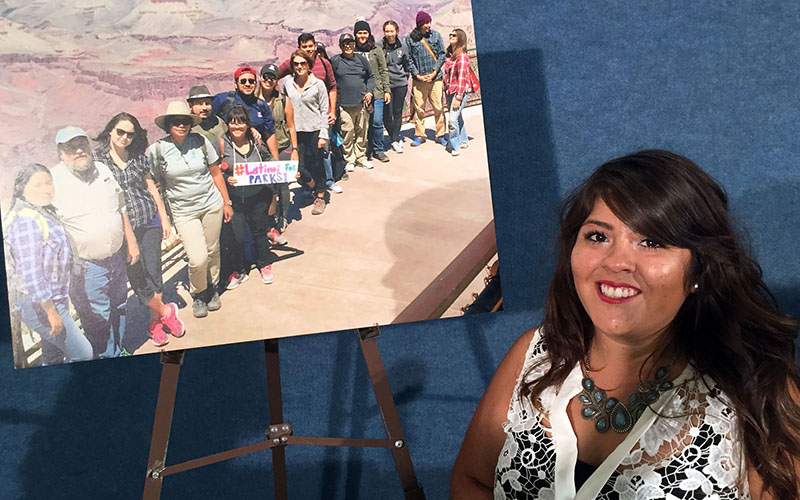 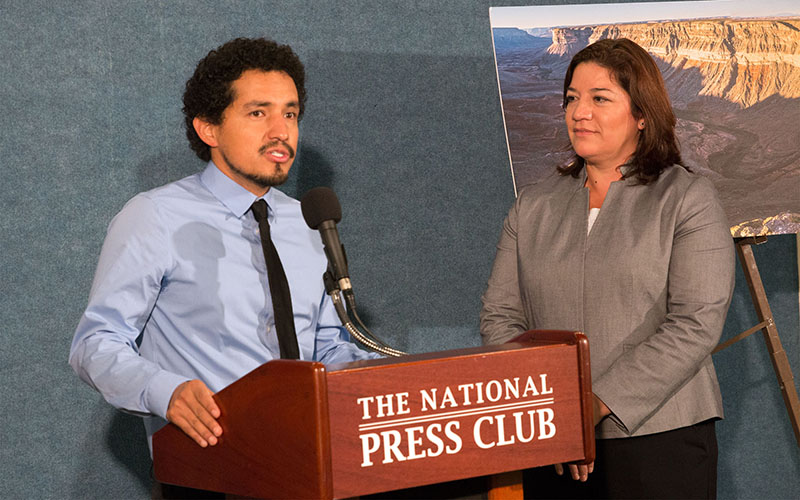 Jose Gonzalez, left, of Latino Outdoors speaks Thursday about the importance of Latino voices on environmental issues, including the call to make land around the Grand Canyon a national monument. (Photo by Adam DeRose/Cronkite News)

WASHINGTON – Anakarina Rodriguez traveled from southern Arizona to Washington with a message for President Barack Obama: designate 1.7 million acres around the Grand Canyon as a national monument.

“I remember being a little girl and traveling to the Grand Canyon for the first time ever,” Rodriguez said. “I remember seeing vividly this amazing wonder of the world, which I had just learned about in Miss Brown’s fifth-grade class.”

Rodriguez was in Washington Thursday to share her experiences and add her voice to other Latino groups who want the president to use his authority under the Antiquities Act to declare the area a national monument, protecting the land for generations to come.

“We know the magnificence of the canyon isn’t just what you see in the photo,” said Latino Outdoors founder Jose Gonzalez. “You need the ecosystem around it. You need the added protections to be able to say that the park can further exist in perpetuity.”

The groups were in Washington the same day that the Senate Energy and Natural Resources Committee was considering a number of bills aimed at limiting the president’s authority to declare monuments on such a scale.

Supporters of those bills, all of which were introduced by Republicans, contend that the Antiques Act, the law that allows a president to designate national monuments, was not meant for the president to unilaterally restrict land use for swaths of millions of acres.

More than 80 percent of those surveyed believe the president should establish the Greater Grand Canyon Heritage National Monument. Even after pollsters identified potential negative impacts cited by the Republican opposition, more than two thirds continued to support the designation of the monument.

Back in Arizona, Rodriguez said the move is also supported by elected officials in Tucson and Pima County, a number of whom signed a letter to Obama that the Latino groups delivered Thursday.

“There is a very wide range of support of elected officials who are supporting the Greater Grand Canyon Heritage National Monument,” she said.

The letter was also signed by Democratic Reps. Raul Grijalva of Tucson and Ruben Gallego of Phoenix, who have been at the forefront of the push for a monument designation.

Gonzalez said the groups took the opportunity of Hispanic Heritage Month to add their voices to other advocates who have backed the monument. He said Latinos have a historic – but often overlooked – support of environmental issues.

He said the Latino voice “is really important in how it compliments the work of other conservation leaders doing this.”

Rodriguez said that, even as a city dweller, she felt a strong connection to Arizona’s national parks and the Grand Canyon at a young age.

“My father used to tell me stories of his childhood, growing up on a ranch,” Rodriguez said. “When I am outdoors, I am able to hold those wonderful memories, and I imagine I am reliving his past.”

Rodriguez, who founded Latinos for Parks earlier this year, took the fledgling group to the canyon for a camping and hiking trip, and to learn about the environmental and cultural importance of the area.

“Our roots are embedded in our culture and traditions and connects us to those cultures and traditions of the Native Americans who once lived there and continue to live among the Grand Canyon,” Rodriguez said.

“We must protect these sacred lands so we can continue to share and celebrate our culture and traditions … for generations to come,” she said.