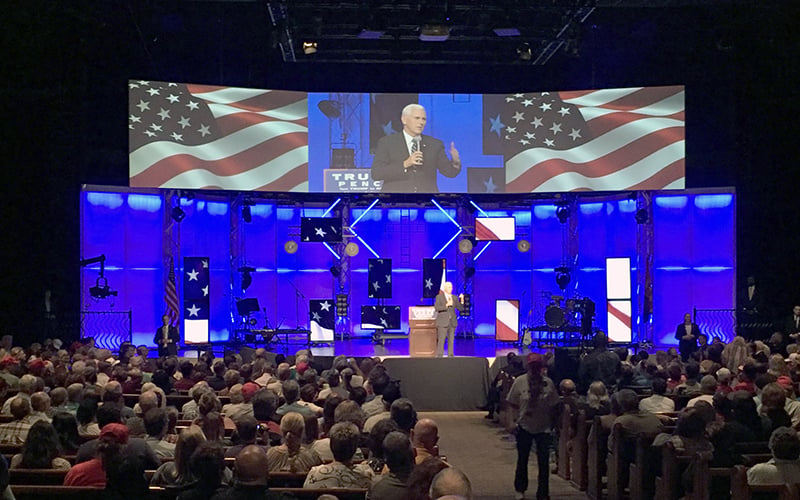 Pence, governor of Indiana, told supporters that GOP presidential nominee Donald Trump’s values and vision for the country make him the best candidate for president.

“All you need to know about Donald Trump is he loves his family and he loves his country,” Pence said at a rally.

Throughout the night, Pence reminded rally-goers that he is the descendent of immigrants and said they have helped build the country.

“My story is a pretty common American story,” he said at the event. “I’ve grown up on the footstool of the American dream. And that’s something Donald Trump and I have in common.”

Trump has been alternately praised and criticized for his stance against immigration of Muslims, plans to build a wall on the border and business resume. Trump and Hillary Clinton, the Democratic nominee, are battling in the few weeks left before the Nov. 8 election.

The tone of Pence’s speech in Mesa shifted from family to policy. Pence said he and Trump will work to undo legislation put in place under President Barack Obama’s administration and will appoint a conservative justice to the Supreme Court.

“From the day we arrive in the White House, I promise you that the Trump/Pence team is going to work our hearts out every day of the week until we’ve revived the American dream for everyone,” he said. “And we can do it through the things that have always worked. I love to tell people that common-sense conservative principles work every time you put them into practice.”

“We’re going to repeal every single one of those Obama executive orders,” he said. “We’re electing a president for the next four years, but make no mistake about it, Arizona, that president will probably set the course and the direction for the Supreme Court of the United States.”

Playing off the enmity across party lines regarding interpretation of the Constitution, Pence told supporters that Trump is going to uphold the document in accord with its original purposes.

Tell us why you have yet to decide:

“If you cherish the freedoms enshrined in our First Amendment; freedom of speech, freedom of religion,” he said. “If you cherish the Second Amendment … then we just have to decide, here and now, that the next president to make appointments to the Supreme Court of the United States will be President Donald Trump.”

Pence also reminded his supporters of his anti-abortion stance and made a plea to vote for his ticket to get more anti-abortion policies enacted.

“There is no more important cause to the Pences than the cause of life,” he said. “We couldn’t be more honored to be standing with Donald Trump, who has made a clear commitment to the sanctity of human life.”

Trump supporters at the event echoed Pence’s sentiments and said they are voting for the ticket because they believe both of the candidates to be honest people.

Some supporters leaned toward Pence’s message of family values, while others threw more support behind the political policy of the ticket.

Debby Haeussler, a volunteer for the Trump campaign, said Pence’s message of family and spirituality resonated with her.

“It’s very important to keep the family unit together through thick and thin,” she said. “And if your family’s in a good place, everything else will follow.”

Joann Price is a parishioner at the church who supports Trump and Pence. She said she first heard of Pence on the radio and agreed with the political statements he made on the air.

“He was saying everything that resonated with me,” she said. “He was talking about God, the country and patriotism and making America great again.”

Laurence Schiff, a medical doctor and Trump campaign manager for Mojave County, said he believes Trump will gain the presidency, even if some predictions show Arizona as a swing state.

“People are thinking that this is almost a battleground state,” Schiff said. “I happen to think it really isn’t … I think he will win at least very comfortably in Arizona.”