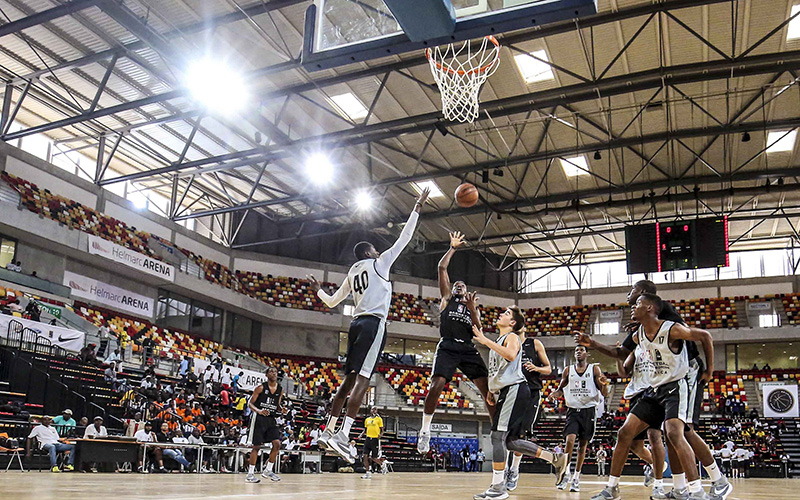 Campers scrimmage during the 2016 NBA Basketball Without Borders camp, in Luanda, Angola. (Photo by NBAE/Getty Images)

While European players largely led the way, the league now has players from all over the globe. League efforts to grow the game have especially paid off in African nations.

More than 65 current or former players have come from Africa or had ties to the continent.

Much of that growth can be attributed to the NBA’s Basketball Without Borders program, the global outreach and basketball development program for the NBA and the International Basketball Federation (FIBA). According to its mission, the program seeks to promote the sport of basketball worldwide, as well as use it as a tool for positive change by promoting education, health and wellness.

In August, a group of NBA stars that included Eric Bledsoe of the Phoenix Suns took part in a Basketball Without Borders camp in Angola, the league’s 14th such camp in Africa.

Bledsoe said that in addition to working with kids on their basketball skills, the players and coaches also took time to teach them principles about teamwork, saying no to drugs, and raising HIV prevention awareness.

“There’s a lot of teaching going on without using the basketball,” Bledsoe said.

Africa was a big part of the league’s fabric before Basketball Without Borders, with NBA legends such as Hakeem Olajuwon and Dikembe Mutombo leading the way for current African-born stars like Serge Ibaka and Luol Deng.

The NBA held the first Basketball Without Borders camp in Africa in 2003. Even then, Amadou Gallo Fall, the NBA’s vice president and managing director for NBA Africa, was excited by the growth opportunities for the sport and the NBA that he saw in that inaugural group of campers.

“We saw tremendous potential for development,” Fall said. “Not only because of the talent pool that was coming to the camp, but also the opportunity we had to impact the community.”

It has paid dividends on and off the court.

The league was able to build on the success of the initial camp and followed up with other skills clinics and building projects that provided the community with new basketball courts, as well as refurbishing local schools.

The reception for basketball on the African continent was encouraging, and in 2010 the NBA opened its first African league offices in Johannesburg, South Africa.

Since opening the offices, Fall and his staff have been working with local governments, basketball federations and nonprofits to build the infrastructure and train coaches to give the youth who are passionate about basketball a chance to play.

“When we opened the office, our goal was to make basketball accessible to boys and girls across the continent,” he said. “We are very proud and excited about the opportunity to build on that.”

The NBA is reaping rewards from its investment. There were a record 10 African players on opening night rosters around the NBA last year. Five players from Africa were selected in the 2016 NBA draft.

But the NBA’s efforts don’t start and stop with Basketball Without Borders. To date, the league also has launched nine Jr. NBA leagues in eight African countries.

Fall is excited by the challenge of growing the game in a continent where soccer is the dominant sport played by most kids. He is confident that when kids are exposed to basketball, they will be drawn in by the fast-paced and fluid play of the sport. In the meantime, Fall and his team are still focused on lowering the barriers of accessibility to the game and strengthening the presence of the league in Africa.

“Our plan is to continue to build on over three decades of involvement on the continent,” he said. “What keeps you going is to see the desire and the hunger these young people have for our game.”