The Sonoyta mud turtle is an aquatic species in the desert – a hard life that experts say is made harder by climate change. The turtle is moving toward endangered species status. (Photo by George Andrejko/Arizona Game and Fish Department) 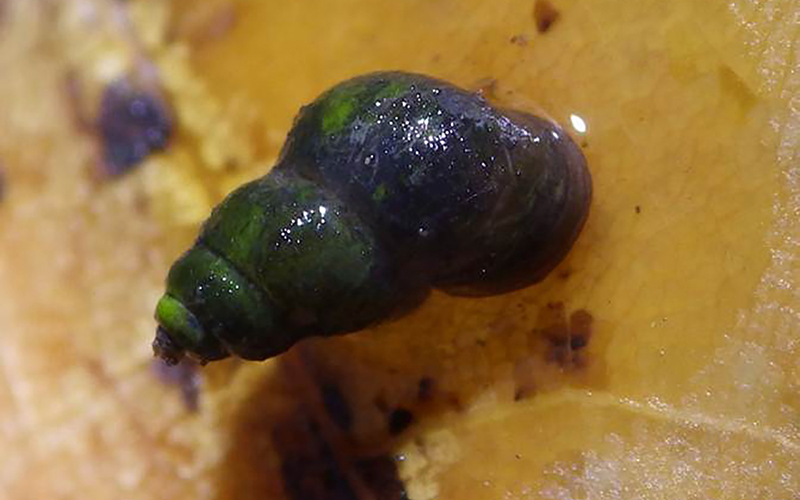 The Huachuca springsnail will not be declared endangered after researchers found many more of the snails living in the Santa Cruz River basin than were thought to exist. (Photo by Martin D. Piorkowski/Arizona Game and Fish Department)

WASHINGTON – Federal officials denied endangered status to a southern Arizona snail Wednesday after unexpectedly finding far more than were thought to exist, but moved to protect what one advocate called the “very imperiled” Sonoyta mud turtle.

Both the turtle and the Huachuca springsnail are “highly aquatic” animals living in the Sonoran Desert, making them vulnerable to droughts, forest fires, groundwater pumping and extreme heat.

“These guys (the turtles) are very imperiled because they’re so dependent on water in a desert,” said Jenny Loda, an amphibian and reptile attorney at the Center for Biological Diversity, which was pushing for both animals to be designated endangered or threatened. “We need to make sure their current waters are protected and take steps to restore previously inhabited areas.”

But the U.S. Fish and Wildlife Service said the springsnail would not be protected because “during the assessment we found that Huachuca springsnails were far more abundant than previously understood,” said Jeff Humphrey, a spokesman for the service’s Southwest Region office.

“We discovered springsnails inhabiting the Santa Cruz River basin and that was a great find,” Humphrey said.

But Michael Robinson, a conservation advocate at the Center for Biological Diversity, said he is still worried for the snail’s future.

A previous version of this story included a quote in the wrong tense from the Center for Biological Diversity’s Michael Robinson. He said future generations “will be so grateful if we protect this tiny snail.” The story here has been corrected, but clients who used previous versions are asked to run the correction that can be found here.

“Even if Huachuca springsnails were found in the Santa Cruz River basin, it doesn’t change the fact that these threats are still endangering the future of the snails,” Robinson said, pointing to the normal environmental challenges that he said have been aggravated by climate change.

Loda said the same factors are threatening the mud turtle, noting that “longstanding drought has added to the problem and obviously climate change is furthering that.” She welcomed the service’s announcement that it is proposing adding the turtle to the endangered species list, even though there are still months of hearings and investigations before that becomes official.

She said the candidate list, which is where the turtle has been languishing for 19 years, is “kind of a wasteland where nothing is done to protect them… which is why I’m so excited the Sonoyta mud turtle might finally receive the designation.”

Getting to this point was a long battle, said Loda, that involved a lawsuit to force Fish and Wildlife to accelerate the consideration of protected status for 757 species.The Sonoyta mud turtle was placed on the candidate list in 1997 and since then its habitat has been reduced to small parts of Pima County, Arizona, and Sonora, Mexico.

Loda said the process of protecting and expanding that habitat will be possible only if the turtle receives full protection under the Endangered Species Act.

As for the future of the springsnail, Robinson said he’s not sure what action the center might take, but noted that it has gone to court in the past to force Fish and Wildlife to change a decision on species designation.

“This snail is miniature and easily overlooked,” he said. “But future generations of our own species will be so grateful if we protect this tiny snail and allowed them to continue their vital job.”

Humphrey agrees that the Huachuca springsnail offers an important service to the fresh springs of the Huachuca Mountains and the San Rafael Valley, but he said the service is confident the snails will be keeping the water clear for generations to come.

“The bulk of the Huachuca springsnails are on federally managed land,” Humphrey said. “So we have predictability and can intervene to protect the springs.”