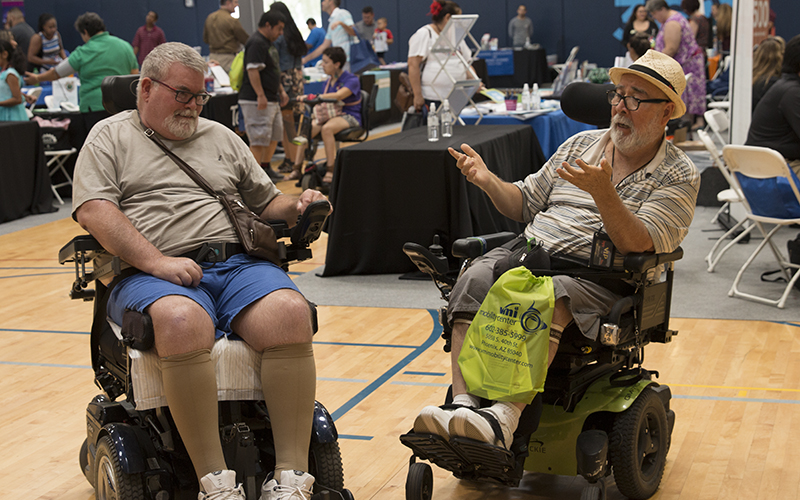 Jose Ortiz-Reyes (right) sings a song to Timothy Rowse during the Latino Disability Summit and Resource Fair in Phoenix on Sept. 19. (Photo by Alejandro Barahona/Cronkite News)

PHOENIX – Eleven years ago, Jose Ortiz-Reyes fell off a scaffold and became paralyzed from the neck down.

Gradually he regained the use of his upper body, but he’s still in a wheelchair. The secret to recovery, he said, is “love and help.”

Ortiz-Reyes said Latinos with disabilities face many obstacles to receiving services. They include language barriers, immigration status, discrimination and self-acceptance.

Not getting services results in some Latinos having a hard time accepting their own disabilities, he said.
He said he considers himself fortunate because he speaks English fluently and is a U.S. citizen.

Ortiz-Reyes, 62, is from San Luis, Sonora, Mexico. A former university professor, he migrated to the U.S. to be with his children.

He was one of dozens of Latinos with disabilities who attended the Latino Disability Summit and Resource Fair on Saturday. Ortiz-Reyes said he is unemployed and wanted to learn what work is available for a Latino with a disability.

Ideally he would love to teach, but he said he is willing to work at a hardware store in customer service.

“Knowledge and information about disability doesn’t always reach the Spanish-speaking community as much as we’d want it to be able to do,” said Phil Pangrazio, the chief executive officer for Ability360, an advocacy group for people with disabilities that focuses on self-sufficiency and independence. Ability360 and Chicanos Por La Causa helped put on the fair.

“It can happen to anybody, at anytime and at all stages of life,” said Pangrazio.
The event offered 12 workshop sessions, each focusing on a certain issue regarding the Latino community or people with disabilities.

One workshop focused on barriers faced by some Latinas with disabilities. They can include poverty, lack of transportation to service providers, lower levels of education as a group, and navigating the complicated healthcare system.

Tim Rowse, 58, said he was diagnosed with multiple sclerosis after not being able to finish an AIDS walk. He came to the fair because he valued the diversity.

“I believe just because you have a disease, doesn’t make you disabled,” he said.

Ortiz-Reyes, the former college professor, said he loves to sing, write poetry and help motivate those who have gone through life-changing events.

He hopes the Latino community will come together and open its heart to those with special needs.
“If you accept your reality and what your purpose is here on earth, you can live a great life,” said Ortiz-Reyes.