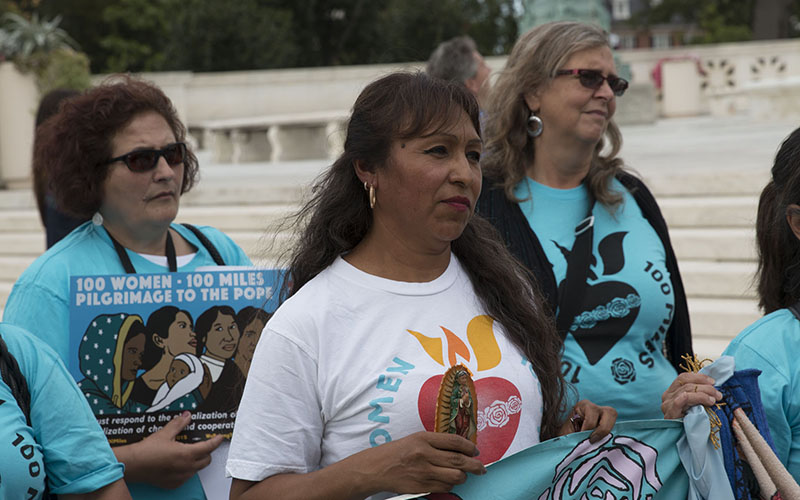 Maricruz Ramirez, in white shirt, said that even though little progress on immigration reform has been made, she is still “happy to be fighting hand-in-hand with my sisters.” (Photo by Adam DeRose/Cronkite News) 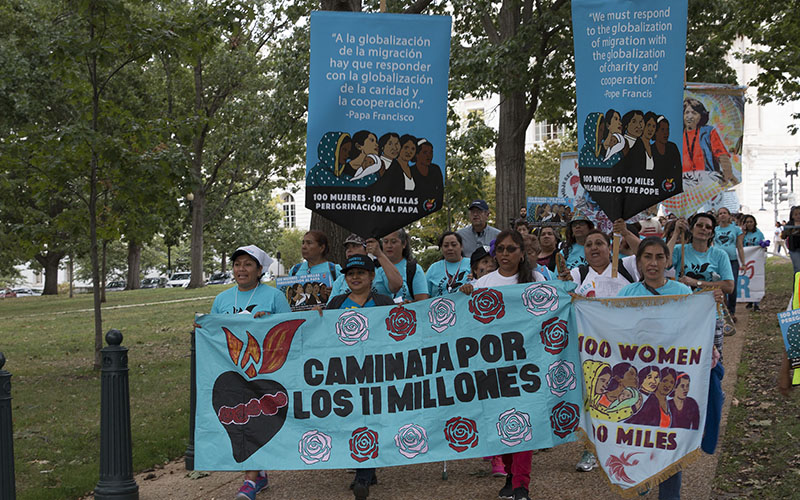 Protesters head down Capitol Hill on their way from the Supreme Court to the White House where they called – again – for an end to deportations and the separation of families. (Photo by Adam DeRose/Cronkite News) 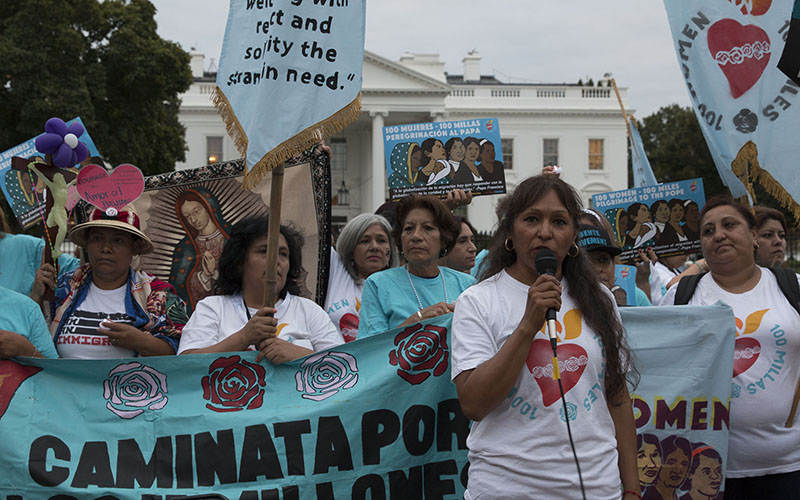 Phoenix resident Maricruz Ramirez speaks outside the White House at a rally marking the anniversary of the “100 Women, 100 Miles” march against deportation. (Photo by Adam DeRose/Cronkite News) 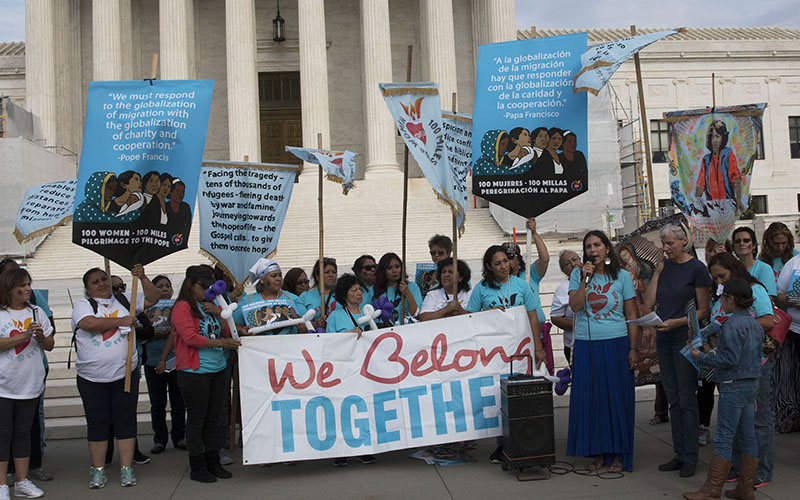 Andrea Mercado of the group We Belong Together said that her group has been active in marches across the country since last year’s anti-deportation march on Washington. (Photo by Adam DeRose/Cronkite News)

WASHINGTON – It was a briefer walk than last year, but the message was the same for three Arizona women who joined scores more marching in Washington Friday – end deportations and the separations of immigrant families.

The women marched from the Supreme Court to the White House to mark the anniversary of the “100 Women, 100 Miles Pilgrimage,” when the same group walked from an immigration detention center in Pennsylvania.

“I’m here because I want a better life. I want to be respected. I want to get a better job,” said Maricruz Ramirez, a Phoenix resident who marched last year and spoke Friday at a vigil outside the White House.

Last year’s march was timed to arrive in Washington just ahead of Pope Francis’ historic visit to the U.S., inspired by his teaching on migration. The pope has been outspoken about the need for compassion toward migrants, many facing political and economic hardships.

Much has changed since then.

Federal courts rejected the Obama administration’s plan to expand the deferred deportation program for DREAMers and their parents. Immigration became a defining – and emotional – issue in the presidential campaign.

“I know that this work isn’t easy, but we do it because we are called to it,” said Andrea Mercado of the We Belong Together campaign that organized event.

“Since last year’s 100-mile walk, we have been walking every month in communities across the nation … from Arizona to El Paso,” Mercado said outside the Supreme Court. “We walk to remember our commitment to one another, to sisterhood and to our calling.”

The group then headed down Pennsylvania Avenue, with marchers chanting and singing in Spanish.

The march made an unscheduled stop across Pennsylvania Avenue from a hotel that GOP presidential nominee Donald Trump is scheduled to open this fall. The marchers directed their chants at Trump, who has pledged to build a border wall that the Mexican government will pay for and vowed that anyone in the country illegally will be deported.

Ramirez, holding a statuette of the Virgin Mary, joined “her sisters” in prayer and exchanged stories of struggle, discrimination and families broken apart by the country’s immigration policies.

Despite the challenges she faces in Arizona, Congress’ inaction on immigration reform and the courts’ blocking of the administration’s plan to ease deportations, Ramirez said she is still “happy to be fighting hand-in-hand with my sisters.”

“We want respect and dignity, and we have an opportunity to do better in this country, and that’s why we’re fighting,” she said.

Ramirez is undocumented, but has been cleaning houses around the Valley for 15 years. She believes some of her clients discriminate against her with lower wages because of her immigration status.

“I don’t want be discriminated against in a workplace, the workplace where my bosses are Americans,” she said through a translator. “Sometimes Americans don’t want to see me here, even though I’m the one doing the work other people don’t want to do.”

Ramirez said it is important that lawmakers in Washington don’t follow the lead of some in Arizona, specifically naming Maricopa County Sheriff Joe Arpaio, and policies shepherded by immigration hardliners, such as Arizona’s SB 1070.

“We are not going to allow the laws in this state (Arizona) become national laws,” Ramirez said, vowing to keep fighting them in Arizona.

“No more bad policies,” she said.