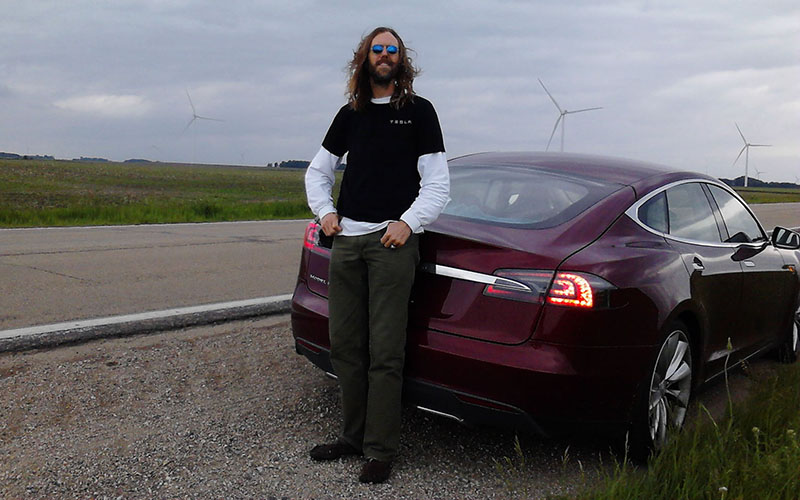 Tesla owner Brian Perkins said is one of a small, but growing, number of electric car owners in Arizona. He and others are trying to spread the word about the cars. (Photo courtesy Brian Perkins)

One element working against electric vehicle sales in Arizona is a lack of public charging stations. There are 400 in Arizona, compared to 4,000 in California. (Photo by Håkan Dahlström/Creative Commons) 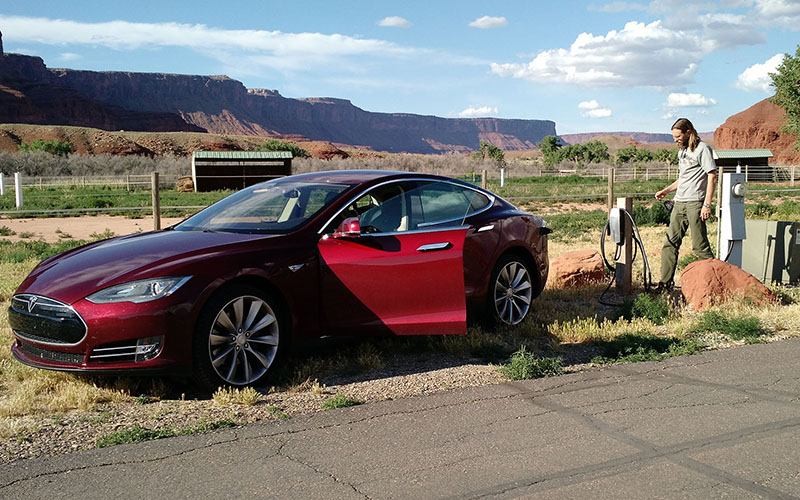 Electric car enthusiast Brian Perkins, at a charging station in Utah, said there are many reasons why people like the cars, from environmental concerns to performance. (Photo courtesy Brian Perkins)

WASHINGTON – When Valley gearheads line up Saturday night at the McDonald’s at Scottsdale Pavilions to show off their cars as they have for more than 20 years, Brian Perkins will be there to help showcase 19 cars.

But the cars Perkins is showing are different than the classic hotrods and souped-up racers that typically show up. They’re all electric.

“Our intention is to show people within this larger car and motorcycle show that electric vehicles are out there,” Perkins said. “A lot of people want to know what it’s like to own a Tesla or a drive a Tesla.”

Perkins and his friends are likely to stand out, but not for their numbers in a lot that can host upwards of 500 cars. Those numbers will reflect the broader picture in Arizona where, despite steadily growing interest, sales of electric vehicles pale in comparison to cars with conventional engines.

The Alliance of Auto Manufacturers reports that electric vehicles – which include “plug-in hybrids” and cars that run on a fuel cell – have accounted for just under a half-million sales nationally since 2011.

Just 6,740 of those sales were in Arizona, a state with more than 6 million vehicles registered, not including temporary permits, motorcycles, farm vehicles and trailers. A fraction of one percent.

That’s one reason advocates like Perkins are hosting events around the country this week, part of a larger initiative lead by the Sierra Club.

“National Drive Electric week is an opportunity to educate the public about the benefits of electric vehicles,” said Gina Coplon-Newfield, who directs the Sierra Club’s Electric Vehicle Initiative.

Events for the week range from car shows and parades to opportunities to test drive the vehicles and kick the tires. The Tucson Public Library featured a movie screening and panel discussion last weekend.

Perkins said people are attracted to the cars for a variety of reasons. Some care about the environment while others are looking to cut dependence on gasoline. Some, like Perkins, who also works for a dealership that sells electric motorcycles, are attracted to performance.

“Some people make the mistaken conclusion that because they drive an electric they must be a Democrat or they must be a liberal. I don’t find that to be the case,” he said.

For Sheli Weis, it was the affordability that converted her.

Weis, who helped spearhead this week’s events in Tucson, said she bought her Leaf used for $9,000 with only 11,950 miles. She said driving electric instead of gas changed the way she budgeted – an important difference for someone like her who has to buy medications.

“You can just plug in your car to a regular outlet in your house at night, just like your cellphone, and you wake up and your car is charged and ready to go,” Weis said. “My budget for my household is so much easier.”

Despite a growing number of believers like Perkins and Weis, the regulatory climate in Arizona has not attracted the attention of manufacturers that could boost sales further.

Coplon-Newfield said much of the growth is happening in the handful of states with zero-emissions vehicle regulations.

“California created a mandate that manufacturers sell an increasing number of electric vehicles. Nine other states have adopted those regulations,” she said. “Arizona is not one of those states.

“The auto manufacturers are putting a ton of efforts into providing inventory and selling these (electric) cars in these states,” Coplon-Newfield said.

California is the nation’s undisputed leader in electric vehicle sales, with more than 200,000 electric and plug-in electric cars sold since 2011. Weis actually bought her used Leaf from California and had it delivered to Tucson.

The Department of Energy’s Alternative Fuel Data Center reports that there are 400 electric-vehicle charging station across Arizona, more than 50 of which are private or have some sort of access restrictions. California boasts more than 4,000 existing stations, and more are on the way.

For Arizonans who want to cut back on gas, but aren’t ready to make the leap to electric vehicles, there are a growing number of options in technologically advanced conventional engines.

“To meet the 2025 greenhouse gas standards, we don’t need the EV, conventional vehicles with some hybridization will likely do the job,” said Johnson, who moderated a panel in Washington Tuesday about optimizing conventional engines.

He described cylinder deactivation, which lets cars run on a portion of the engine, and “start-stop” technology that shuts an engine down when it is not needed, for instance at a stop light, and turns it on quickly when the driver hits the gas.

Start-stop technology was developed in hybrid vehicles but experts on Tuesday’s panel predicted that most engines will incorporate it by 2025.

“All of these efforts are important from a climate perspective and energy-independences perspective,” Coplon-Newfield said.

She lauded the Obama administration’s 2012 fuel efficiency standards, the same ones Johnson referred to. “We’re going to need all sorts of technologies to get there.”