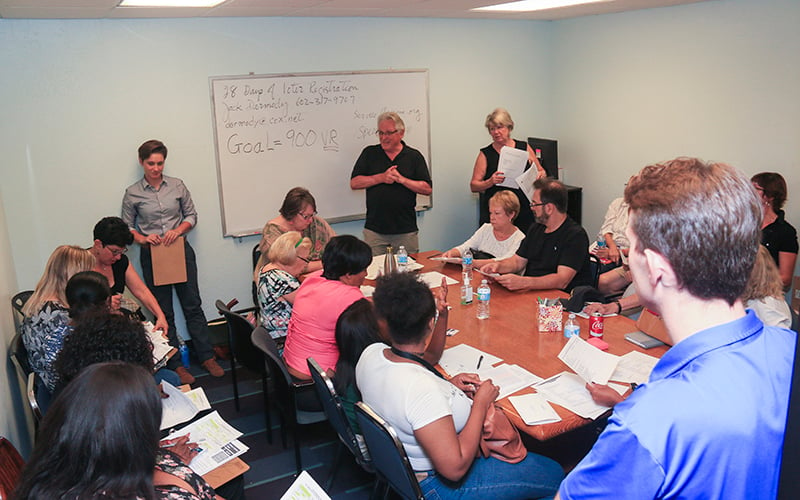 PHOENIX – Melrose Brown, a 17-year-old African American high school student, moved to Phoenix two years ago from Minnesota. Since then, she said, she has witnessed several instances of racism.

Once, when she was eating lunch, she said, a group of boys discussed how African Americans and other minority groups needed to return to their countries of origin.

“When they spoke about those things, I felt hurt,” Brown said.

Recently, Brown joined 21 other volunteers in a class on how to register voters. The class was held at the Arizona Democratic Party headquarters in downtown Phoenix.

Brown and several others attending the class said they were neither concerned nor worried that recent controversies surrounding Clinton would impact voter outreach and turnout.

On Sept. 9, Clinton called half of the supporters of Republican presidential nominee Donald Trump a “basket of deplorables“, and on Sept. 11 she stumbled during a 9/11 ceremony in New York. Her campaign later revealed she had pneumonia.

Like Brown, Frank Sacco, a 90-year-old retired teacher and World War II veteran who served in the Pacific, was also not concerned about the recent Clinton controversies and their impact on voters.

Along with family and work obligations presenting a barrier for voter turnout, Sacco said he believes voters do not go to the polls on election day because they feel their votes don’t count.

But like others at the voter registration class, Sacco believes every vote counts.

“[It’s] extremely important in a democracy that people register and then be able to express their concerns by being at the ballot box,” he said.

Signing up voters is crucial for Democrats because Arizona may or may not be in play for Clinton.

According to an Arizona election forecast by the website FiveThirtyEight, Clinton has only a 25.6 percent chance of winning in Arizona.

However, a recent Arizona Republic/Morrison/Cronkite News poll suggests that if the election were held today, the numbers could be a lot closer. The poll shows Trump winning Arizona by 35.1 percent and Clinton trailing at 33.5 percent. Another 22.9 percent of voters remain undecided, while the rest selected a third party.

According to Enrique Gutierrez, director of communications for the Arizona Democratic Party, Democrats launched a voter registration campaign in January to register 100,000 eligible voters.

“We don’t want them to just only see the ads that are going on TV, but sometimes we want that one-on-one interaction with them,” Gutierrez said.