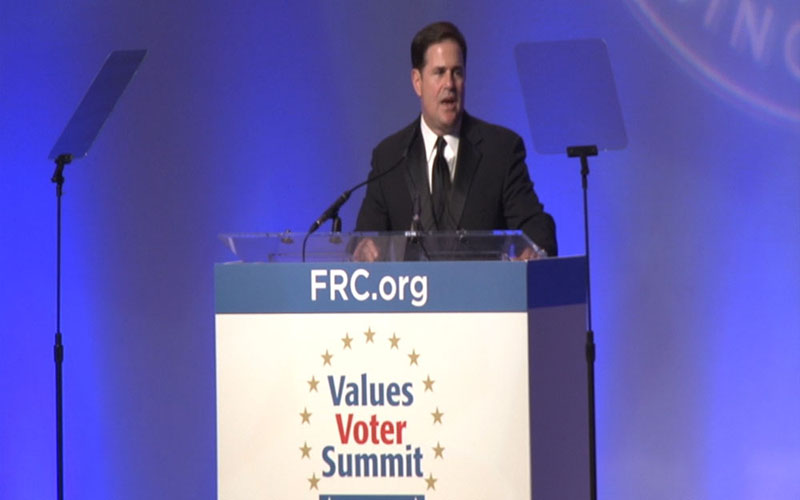 Gov. Doug Ducey told a Washington audience of conservative voters that legalizing recreational marijuana use – an issue on the Arizona ballot this fall – presents a “very real” danger of addiction. (Photo by Claire Caulfield/Cronkite News)

Supporters of Prop 205 – which would let Arizonans 21 and older possess up to one ounce of marijuana and six plants – called Gov. Doug Ducey’s criticisms of the initiative “typical GOP fear-mongering” on the issue. (Photo by Katie Bieri/Cronkite News)

WASHINGTON – Gov. Doug Ducey told a Washington audience this weekend that the movement to legalize recreational marijuana is “a battle for the minds and future of our children’s lives.”

It was just one of several issues that Ducey cited in a Saturday speech to the annual Values Voter Summit, where he said the nation needs more virtuous role models in public service.

Ducey, who was there as part of a tribute to William Bennett, the nation’s first drug czar and a former secretary of Education, did not specifically mention the state’s marijuana initiative in his speech, but made his position clear on that and other issues facing the state.

“As the push for legalization of recreational marijuana gains traction, Bill Bennett is here to remind us that the dangers of addiction are still very real,” Ducey told a ballroom with hundreds of enthusiastic conservatives. “Make no mistake, this is a battle for the minds and future of our children’s lives.”

Arizonans will have the chance to vote in November on Proposition 205, the Regulation and Taxation of Marijuana Act, which would legalize possession of up to one ounce of marijuana and up to six plants for anyone in the state over age 21. Money raised from marijuana taxes would go to state schools and public health, under the initiative.

An Arizona Republic/Morrison/Cronkite News poll released last week showed 50 percent of registered voters in Arizona are in favor of legalizing marijuana for those over age 21, with a margin of error of 3.2 percent. The telephone survey, conducted from Aug. 17-31, said 39.9 percent of respondents were opposed and 10.2 percent were undecided.

“Marijuana is out there. There’s no changing that,” said Carlos Alfaro, deputy campaign manager for Proposition 205. “The question here is, are we going to tax and regulate it for the good of education and the safety of the citizens or are we going continue prohibition and enrich criminal drug cartels?”

In his speech, Ducey linked marijuana use at a young age to unemployment, homelessness, domestic violence and child neglect.

Mikel Weisser, the executive director at the Arizona chapter of the National Organization for the Reform of Marijuana Laws, called those comments “typical GOP fear-mongering.”

“He’s presenting all illicit drugs as one. Doug Ducey is standing with the country’s leading opioid manufacturers,” Weisser said. “In the state of Arizona, you have nine people die a day of prescription drug abuse. And he’s siding with those guys for corporate profit, not for the good of the citizens of Arizona.”

In comments before his speech, Ducey also said he opposes the other ballot initiative, which would raise the minimum wage to $12 an hour by 2020.

“I’d like to see us have a comprehensive policy as to how we’re to build the economy in Arizona, and I don’t think government setting the price of labor is the way to do that,” Ducey said of the wage hike proposed in Proposition 206.

That proposition also has wide support, according to the Arizona Republic/Morrison/Cronkite News poll. It said that about 61 percent of respondents support raising the state minimum wage from the current $8.05 per hour to $10 an hour by 2017 and $12 by 2020.

Ducey pointed to a 2014 report from the nonpartisan Congressional Budget Office that predicted there could be anywhere from “very slight” increase in unemployment to as many as 1 million jobs lost if the national minimum wage was raised to $10.10 an hour.