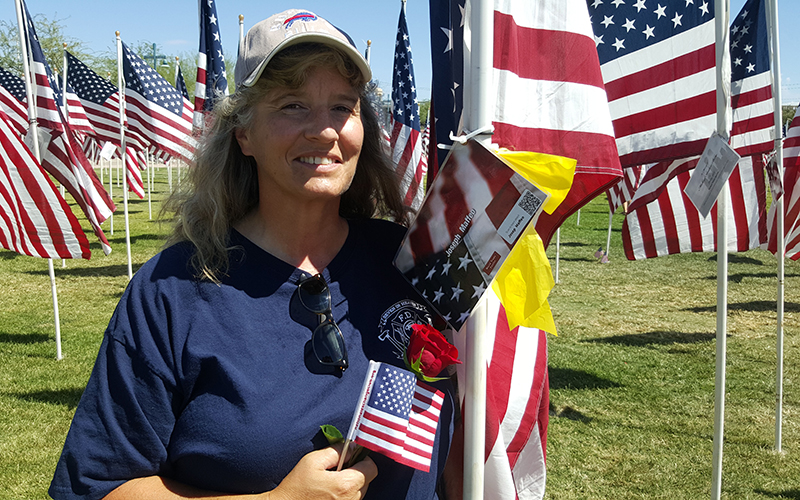 Phoenix mail carrier Angela DiMaria places roses on the flagpoles of firefighters who died during the 9/11 terrorism attacks. She visits the Healing Field in Tempe every year. (Photo by Michelle Chance/Cronkite News)

By fourth grade, Sandoval knew what she wanted to be: a combat medic in the Army. She wanted to help those hurt by terrorism and war – the two words she heard frequently in class and over the dinner table most of her life.

However, women couldn’t serve in combat at the time. That changed earlier this year when the armed forces opened up combat positions to women. Sandoval, an Arizona resident, enlisted in the Army and trained to be a combat medic.

On Sunday – the 15th anniversary of the 9/11 attacks – Pfc. Adriana Sandoval donned her full Army fatigues and spent 9.5 hours in the triple-digit heat at the Healing Field in Tempe. She stood and saluted each flag, a symbol representing a victim who perished in the 9/11 attacks.

“9/11 is the reason I enlisted. It’s what pushed me,” Sandoval said. “I didn’t lose anyone, but then again, we lost everyone.” listen

Sandoval said Sunday was her first time visiting the memorial at Tempe Beach Park, but she plans on paying respect to the victims of the Sept. 11 attacks by saluting each flag every year going forward.

Royse said his organization has put on the Healing Field event for the past 13 years, and he estimated this year’s event had a 30 percent increase because of the anniversary. Although the club does not tally the attendance, Royse estimated about 10,000 people attended.

Angela DiMaria also attended. The daughter of a Rochester, New York, firefighter, DiMaria said she comes to the memorial every year and attaches red roses to the flagpoles of lost firemen.

“So many sons and daughters had their father not come home that day,” DiMaria said. The roses “help heal and turn it into something good.”

DiMaria was a letter carrier in Phoenix the day of the attacks. As she loaded the mail for her usual route that morning, DiMaria said she placed the box down in defeat.

“I figured I just saw the start of World War III. What’s the point? Nobody is going to be around to get mail,” she said.

Despite the fear and the hopelessness that she felt, DiMaria carried on and delivered the mail anyway.

At one point, a car carrying a family pulled up next to her. She described how the father looked at her and said, “The mail must go through!” The kids in the backseat cheered.

“All of a sudden I felt like, ‘There is a point. Oh, there is a big point indeed,'” Di Maria said. listen

“We were the only normalcy that the people saw, and I think it gave people a little hope that we were going to get back to normal because the letter carriers were still delivering mail.”