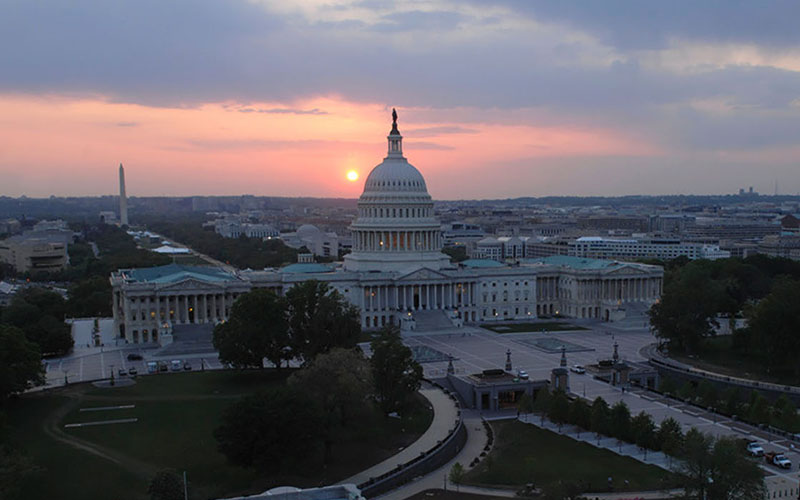 Congress returned from summer recess this month facing a full slate of issues – but with little time before an October recess and, experts say, scant will in an election year. (Photo courtesy Architect of the Capitol)

WASHINGTON – House members came together on the steps of the Capitol Friday to mark the 15th anniversary of 9/11, listening to speeches, joining with the U.S. Marine Band in a rendition of “God Bless America” and observing a moment of silence.

It was the sort of symbolic display that experts say could consume much of the next few weeks, which lawmakers could spend voting on issues that may be useful in their ongoing campaigns.

A week into a shortened session before it leaves again for an election-year October recess, Congress has made no progress on any of the 12 spending bills for the budget that ends Sept. 30 and remains stalled over emergency funding to fight the Zika virus. Instead, lawmakers on both sides of the aisles are playing politics while the clock is ticking.

“I think we’ll see Congress paying some attention to some smaller more symbolic issues in advance of the election,” said Molly Reynolds, a fellow at the Brookings Institution, who noted that House Republicans have said they might vote to admonish the administration’s handing of Iran. “I think we’ll see some symbolic votes of that kind.”

The most-pressing issue facing Congress is the budget – the federal government could shut down if a new budget is not passed by Sept. 30 or if a resolution is not approved to keep the government running temporarily.

Both sides agree that there will be a continuing resolution to keep the government open. But even there, they can’t agree.

“I think a lot of the attention in the upcoming weeks is resolving this spending dispute,” Reynolds said. “Which one of these approaches do we take to keep the government running past the end of the month?”

Rep. Paul Gosar, R-Prescott, is opposed to a resolution that would put the budget before a lame-duck Congress after the election, an aide said. That would give Congress less than 30 days to agree on a spending plan that lawmakers could pack with extra spending.

Rep. David Schweikert, R-Fountain Hills, said he hopes to see some updates to the government’s spending plans to reflect changes over time, adding that some budgets have been rolled over for too many years through passage of a comprehensive bill right before a deadline.

“You always have roadblocks. That’s part of what we do. One person’s roadblock is another person’s, another community’s, desires and wishes,” Schweikert said of the process. “We also have to deal with the vanity and the desires of some members who are leaving who want to finish off a certain project or have … a list of priorities.”

Schweikert said the discussion is a balance between those lawmakers who won’t be returning for the next session and may vote to pack the budget, and those who want to use the opportunity to discuss possible updates in budget policy.

“Technology has changed. Court rulings have changed. Needs have changed: Some things are fully funded, other things are new needs,” Schweikert said. “That’s why the appropriations bills start to become so important.”

While the budget debate is going on largely behind closed doors, discussions over Zika funding have been out in the open. But no more successful.

The Republican-controlled House passed a bill in June that shifted funding for Zika research from other programs, but it included funding cuts to Planned Parenthood, a move Democrats rejected.

Senate Democrats blocked an attempt earlier this week to break the filibuster on a Zika measure, meaning both parties must return to draw up a new play, Reynolds said.

“Our citizens are demanding their elected representatives do the hard work to solve the problems plaguing our nation now – not whenever it seems politically convenient,” McCain said in a statement released by his office Tuesday.

Whatever the solution for the Zika funding stalemate, Schweikert said his office is now working to include language in any bill that would streamline the research, development and testing process in the event a cure is possible.

“It’s more than just money. We’re trying to make sure the bureaucracy has moved Zika up to the very top of the priority list,” he said.

While Congress grapples with the bigger issues, Arizona lawmakers are still hoping to win local victories in the few weeks remaining in this session.

Gosar’s office is working on shepherding three energy bills, including the Public Lands Renewable Energy Development Act. It would update the permitting process for renewable energy development on public lands and create a system for counties and states to share in the revenues from such development.

He is also working on a bill to allow the culling of bison in Grand Canyon National Park and another requiring the Bureau of Reclamation to conduct and publish reports related to its infrastructure needs and estimated costs.

Schweikert said this his staff is nearing completion on a plan to rewrite Medicare. Schweikert said he plans to pursue cosponsors with the rest of this year.

Other members of the delegation did not return requests for comment.