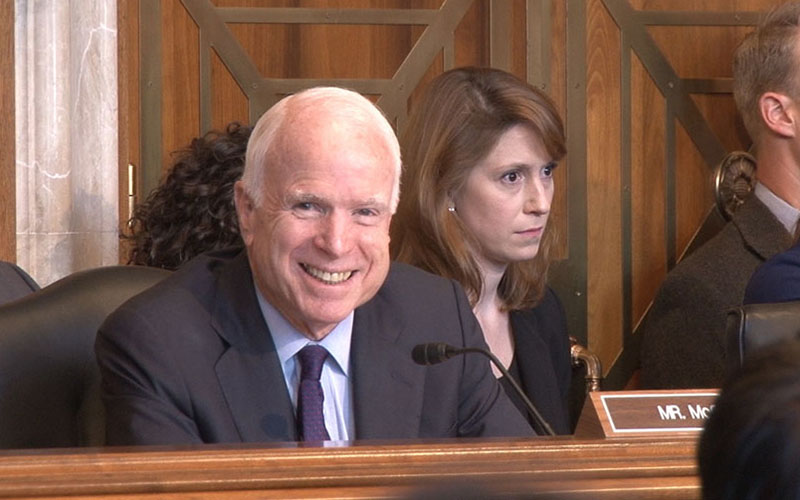 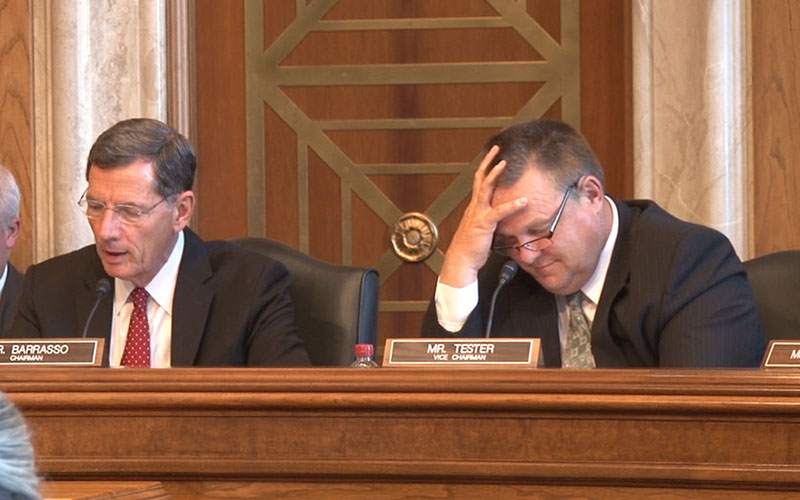 Sen. John McCain, R-Arizona, chided Sen. Jon Tester, D-Montana, for his opposition to school choice for tribal youth, calling “shame on you” for the position. (Photo by Claire Caulfield/Cronkite News)

The school choice measure was one of three given preliminary approval by the Senate Committee on Indian Affairs, along with a bill that would release funds for a White Mountain Apache water project and another that would discourage the sale of tribal relics and artifacts.

But the Native American Education Opportunity Act, passed on a 7-6 vote, sparked the most heated debate.

Sen. John McCain, R-Arizona, said he sponsored the bill because he has no interest in maintaining the status quo when it comes to Native American education, ticking off a litany of problems at BIE schools and the resulting challenges that tribal students face.

The bill would expand education savings accounts to students currently attending a school run by the bureau, diverting 90 percent of the per-pupil government spending into an account controlled by the student’s family. The family could then use that money for private school tuition or other educational expenses like tutoring, supplies or fees.

Sen. Jon Tester, D-Montana, lead the opposition to the bill, which he called “not a good choice.”

“I do not believe in any program that would divert public education funds to private entitles with limited accountability,” said Tester, vice chairman of the committee.

“We’re going to consider a bill that would create a separate line item to subsidize a handful of states at the expense of tribal schools across this country and at the expense of native youth. Not a good choice,” Tester said.

McCain shot back, saying the $15,000 that BIE spends on average per student is money poorly spent, pointing to schools that have not had a safety inspection in 10 years, among many other issues.

“So even though we spend more money per student in the BIE schools, the senator from Montana by God wants the status quo. That’s great,” McCain said. “Shame on you.

“According to the senator from Montana, kids who … only half of them graduating on the reservation are not going to be allowed to have the choice that the non-Native students will in my home state of Arizona,” McCain said.

Arizona is one of five states that currently have education savings account programs for their students. The state Department of Education said 2,960 students are currently enrolled in the program; McCain’s bill, if passed, would make another 12,000 students in BIE schools in the state eligible for such accounts.

Fewer than 3,000 students would be affected in BIE schools in the rest of the country, in schools in Mississippi, Florida and Nevada.

In Arizona, state Sen. Carlyle Begay, R-Ganado, said it’s time that Native children had the same opportunity as others in the state.

“As Sen. McCain pointed out, very passionately, you cannot ignore the fact that most of the BIE schools are failing Native American youth,” Begay said.

He sponsored a bill to expand education savings accounts in the state in 2015 and said more than 200 families applied in a four-week span, 90 of them families with children at BIE and tribal-grant schools.

“We had to turn those families away because Arizona’s education savings account program only applied to state-funded schools … and BIE schools are federally funded,” he said.

There was considerably less debate on the other measures, which the committee passed on voice votes.

The committee approved a bill that would amend the White Mountain Apache Tribe Water Rights Quantification Act of 2010 to clarify the tribe’s ability to use funds from a water-rights settlement for rural water infrastructure.

The committee also passed, without debate, a bill condemning the export and sale of tribal relic and cultural artifacts and calling on federal agencies to stop such sales and work to return such items to their tribes.

Jackson Brossy, executive director of the Navajo Nation Washington Office, said at Wednesday’s meeting that the Navajo are “100 percent” behind the bill.