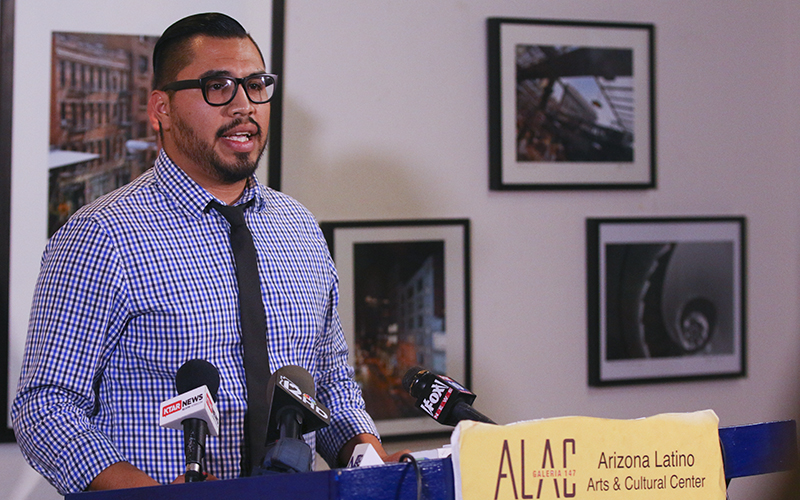 PHOENIX – Ramon Chavez worries that if Donald Trump becomes president, his family, including his autistic brother, will be deported to Mexico. Regardless of what Trump may say Wednesday night about his immigration policy, Chavez is not convinced that the Republican presidential candidate will soften his original plan to implement mass deportation policies.

“I am scared,” said the 23-year-old Phoenix College student, an undocumented immigrant and DREAMer who received temporary relief from deportation in 2012 under President Obama’s Deferred Action for Childhood Arrivals (DACA) executive action.

Chavez spoke along with Phoenix Mayor Greg Stanton and Arizona Rep. Rebecca Rios at a press conference held by Arizona Democratic leaders on Wednesday several hours before Trump’s immigration speech. He said, “[Trump] has promised that if he does become president, he will deport me, he will deport my brother and he will deport my parents.”

Chavez said his family came to the United States before he was a teenager, in order to support him and his autistic brother. After Chavez graduated from high school, he said, his friends went to college but he was not able to attend himself. At the time, undocumented students were required to pay out-of-state-tuition at the state’s universities.

“I wanted to go to school, I wanted to better myself and I wanted to make a difference, but there was a huge barrier in my way,” he said.

He earned money in landscaping and food service jobs he found on Craigslist, he said.

Hope came when he received his deferred action, he said, which gave him the opportunity to legally work and study in the United States. He said he hopes to eventually obtain a business degree from Arizona State University.

However, he said he feels his dreams are under threat of “being shattered” under a Trump administration.

Trump’s Arizona campaign spokesman, Coalter Baker, was not immediately available for comment. However, the candidate’s website on Wednesday did not mention deporting all of the nation’s undocumented immigrants, but suggested tripling the number of Immigration and Customs Enforcement (ICE) officers.

Stanton said Trump’s deportation plan would be an “instant disaster” for the national and state economies.

According to Stanton, 40 percent of Arizona’s exports are going to Mexico. He said the city of Phoenix accounts for two-thirds of the state’s total exports.

“No city in America would benefit more from comprehensive immigration reform than Phoenix,” Stanton said.

He also said he supports Democratic presidential candidate Hillary Clinton, saying that she has a plan to fix a “broken” immigration system and build a “21st century export-driven economy” for Phoenix.

Rios said the Trump campaign is built on “stoking racial fear and division.”