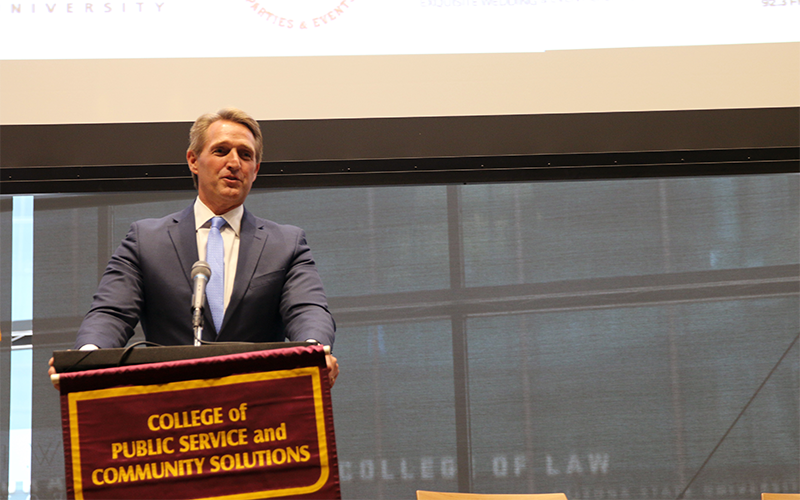 Arizona Republican Sen. Jeff Flake said on Friday he still is not going to support Donald Trump for president, even in the name of party unity. (Photo by Joshua Bowling/Cronkite News)

PHOENIX — Republican Sen. Jeff Flake has said he is sticking to his principles and won’t vote for Donald Trump or Hillary Clinton for president.

Flake on Friday expressed his often-professed and continuing disappointment in Trump, the Republican nominee, and Clinton, his Democratic opponent, at a Phoenix news conference.

When asked who he would vote for, Flake said, “You could always write somebody in.”

“I’d like to have party unity, but it’s not enough just to have the party unified behind one candidate,” Flake said. “It’s important to be unified as a party but I’m concerned about the party long term if we unify behind this kind of message. So that’s why I’m doing what I’m doing.”

Flake earlier in the day told about 100 people at a presentation sponsored by the Arizona Hispanic Chamber of Commerce he would not vote for Trump, who has angered many Latino voters and others over proposals to build a wall at the border. Flake had said weeks earlier he planned to mow his lawn rather than attend the Republican National Convention in July, where Trump was officially chosen as the Republican nominee.

“It will come as no surprise to anyone here that I am not a fan of my party’s ticket,” Flake told the group of about 100 at Arizona State University’s Beus Center for Law and Society. “Or the man at the top of the ticket.”

Flake said he is not part of the “Never Trump,” movement but will not throw his support behind the party nominee unless Trump changes his stance on immigration and moves toward more specific ways of securing the border.

“We cannot move forward if we go out of our way to offend every voting demographic out there,” Flake said. “We are an inclusive party. We offer an alternative.”

Trump had planned to visit Phoenix on Wednesday to discuss party unity, then campaign officials said Friday the appearance was cancelled. Then, Trump tweeted that he is coming to discuss immigration but no official time or place has been set and it was not posted on his website as of Monday morning. Flake said Friday he was not invited and had not planned to go.

“I would like to be able to support our nominee,” Flake said. “This is not a comfortable position for me to be in. If our candidate were able to turn around and disavow the language he has used, and adopt different positions than he has taken … I would be glad to support him.”

Trump’s campaign did not respond Friday to a request for comment.

On Wednesday, Flake tweeted support for Trump’s latest point on immigration, possibly opening the door to undocumented immigrants if they paid back taxes, according to The New York Times. Flake said that Trump quickly reversed track, however.

More grounded positions on immigration from @realDonaldTrump a positive sign. Hope it continues amid flak from opponents

“When he makes statements that are in the right direction, I want to say, ‘that’s good,'” Flake said at the news conference. “To win over Arizona and to win over elsewhere in the country, he’s got to be more realistic and more pragmatic about how we deal with this issue.”