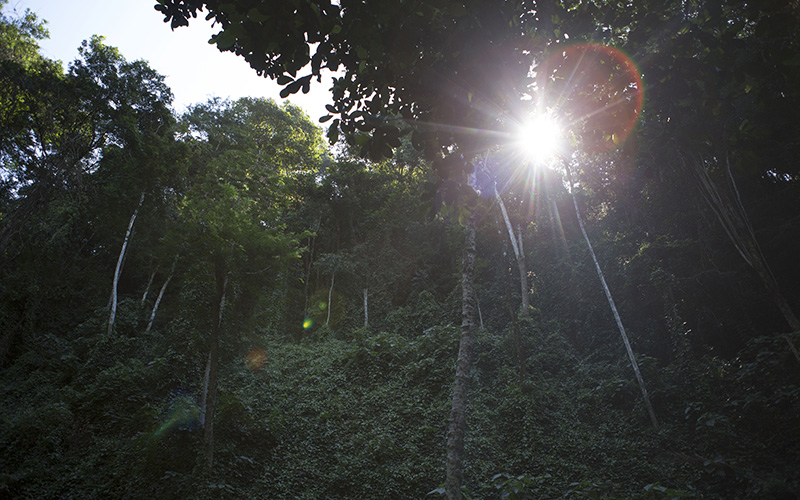 More than 3 million people annually walk through the green 25-square-mile Tijuca National Park that has more species of trees than the entirety of the United States. (Photo by Jaclyn Chung/Cronkite News)

RIO DE JANEIRO — Parque Nacional da Tijuca is the smallest forest out of the 71 national parks in Brazil. It’s also one of the most vital to Rio de Janeiro.

This forest was a piece of Castro’s childhood.

“Since I was little, I visited this park and being here influenced me to study biology,” he said. “I’ve seen a lot of people come to this park to have fun and I’ve seen it grow in popularity.”

More than three million people annually walk through the green 25-square-mile park that has more species of trees than the entirety of the United States. The effects of the forest on the environment convinced the government to issue protective orders in 1861. One hundred years later, it became a national forest.

Today, it’s a thriving visitation location for locals and tourists, including Brazilian brother and sister Itamar and Itiele Borges.

“The park is important because of the ecology, it’s a good place to hang out and it’s beautiful for us,” Itamar said through a translator.

Tijuca wasn’t always a place for visitors. In the past, its water supply was used to provide citizens with drinking water.

However, Castro said much of the forest was destroyed in the 19th century to clear space to grow coffee. The country has been an enormous source of coffee exportation for hundreds of years — today, Brazil exports more coffee than any other country and produces as much as the next two countries on the list combined.
As part of the reforestation efforts in the 1800s, laws were passed that forbid the planting of coffee beans in Tijuca.

“With the destruction, the water started to dry,” he said. “The government realized the importance to recover the forest.”

This was back when monarchs still ruled Brazil. They began reintroducing trees into the environment. Repopulation has also begun in some animal species: butterflies fly around, monkeys and sloths sit in trees, and coatis, raccoon-like creatures with a long tail and a pointy, anteater-like nose, walks through clearings in front of visitors.

“A lot of places in Rio are urbanized,” Itiele said through a translator. “We have a lot of pollution that’s bad for breathing.”

Ironically enough, Tijuca Park is also classified as urbanized due to its man-made rebuilding process. It’s considered one of the two largest urbanized forests in the world, with Johannesburg, South Africa holding the distinction of the other.

In the Olympic Games, Tijuca has served as a point of interest in part due to it being entirely in the city. A car ride can take a visitor from the beaches of Rio to the forest in about half an hour, and it is close to a subway line that stops near the rowing facility at the Rodrigo de Freitas Lagoon a couple blocks off the Atlantic Ocean.

“It’s right there,” Itiele said during the final week of the Olympics. “I am watching everything on TV and I’m rooting for gold and for the medals, but I prefer to be here today.”

Castro called Tijuca a “gateway” into the larger parks Rio has to offer, including Corcovado Mountain, where the 125-foot tall landmark statue Christ the Redeemer stands. It’s also a UNESCO park due to the land and the history.

Rio’s population has tripled over the last 70 years. Because of the preservation laws for Tijuca Park, the population is forced to grow in different ways. The forest is inside the boundaries of the city, which limits the expansion of urban sprawl. Instead, Castro says the city grows vertically.

At the top of the Vista Chinesa mountain at Tijuca, there’s a clear view of Christ the Redeemer and of different areas of the city and favelas separated by mountains, water or forests.

Tijuca has done more over the last three weeks than provide a spot for locals and tourists to explore, though: Castro said it helps Rio show its inner beauty to the world.

“In the Olympics I believe the park has the opportunity to promote itself to a great number of countries and international press, which is more important than the number of visitors itself,” he said.