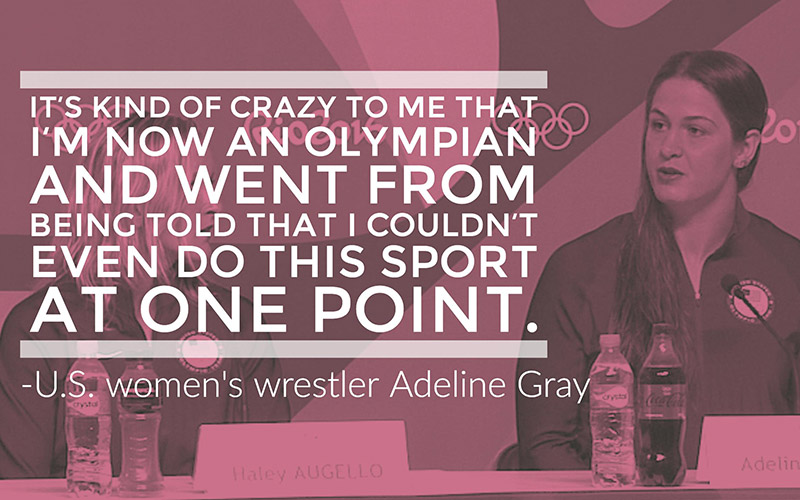 RIO DE JANEIRO — Before there was Simone Biles there was Nadia Comaneci, the Romanian gymnast who was the first person ever to score a perfect 10, in the 1976 Olympics in Montreal.

When told that Biles was among a record number of female athletes competing for the United States, Comaneci was shocked.

“Is that how many women are here? Oh my gosh,” the world-renowned gymnast said after being told that 292 women were in Rio representing the U.S.

Sports leaders and athletes attribute a significant portion of the growth of U.S. women Olympians to Title IX, which was created more than 40 years ago to ensure gender equity in federally funded educational programs.

Signed into law by President Richard Nixon, Title IX of the Education Amendments of 1972 states that “no person in the United States shall, on the basis of sex, be excluded from participation in, be denied the benefits of, or be subjected to discrimination under any education program or activity receiving Federal financial assistance.”

USOC CEO Scott Blackmun called Title IX the “tipping point” for the increase in women in U.S. sports, saying the law has fostered equal opportunity for members of both sexes to compete in college sports and cultivate the skills that could eventually land them in the Olympics.

“Our women got a great head start in the United States because of the support that they got in schools and colleges growing up. So if you look at what started to happen 10 years, 20 years after the passage of Title IX, it really began to have a huge impact. And you combine that with the great collegian structure that we have and the support that we get from NCAA,” Blackmun said during a USOC briefing last week in Rio.

In the 1972 Olympic games that were held just two months after Title IX passed, only 84 women competed for the U.S., or 21 percent of the U.S. team, according to Sports Reference LLC. By 1976, when Comaneci competed for Romania in Montreal, 29.7 percent of the United States team was female, 118 women total.

Forty years later, more than half the U.S. Olympic team – 52.7 percent – is female. The nearly 300 women the U.S. brought to Rio marks the the highest number of female athletes to ever represent a single nation, according to the USOC.

Two generations of Olympians have come of age since Title IX became law 44 years ago, including Kerri Walsh Jennings, a three-time Olympic gold medalist in women’s beach volleyball who attended Stanford University on an athletic scholarship.

“I think the numbers speak for themselves. Title IX created a movement and that’s not stopping anytime soon,” Walsh Jennings said. “For me, I’ve never not had an opportunity and that’s all because of Title IX.”

U.S. women’s wrestler and 2014 world champion Adeline Gray said she is grateful that the U.S. has helped to break the glass ceiling for women in sports.

“I appreciate that the United States is so supportive of us kind of breaking down some of those barriers,” Gray said. “That women are allowed to be goal-orientated and strong and powerful at the same time.”

As a middle schooler, Gray wanted to compete on her school’s wrestling team, but was told she could not because she was a girl. She was persistent, pointing to Title IX with school administrators who eventually let her onto the team.

“It’s kind of crazy to me that I’m now an Olympian and went from being told that I couldn’t even do this sport at one point,” said Gray, 25.

The percentage of female athletes with Arizona connections who are now competing in the Rio Olympics parallels the U.S. team as whole, according to a Cronkite News analysis.

Of the 16 U.S. athletes in Rio who were raised in, have lived in, went to school in, or play professionally in Arizona, half are women.

Gray said there are still a lot of challenges women face, particularly in combat sports like wrestling. She said Title IX has not solved all of the issues for female athletes but it has helped her and her female wrestling teammates get to the Olympics.

One challenge that persists for females in sports in America is in coaching. U.S. women’s wrestler and two-time Olympian, Elena Pirozhkova, said there are not enough female coaches or equal pay rates for those coaches to assist so many up-and-coming female athletes.

A survey of NCAA schools by Brooklyn College researchers showed that 4 out of 10 coaches for women’s teams were female in 2014 and that 1 out of 4.5 head coaches of all NCAA teams, men’s and women’s, was a female.

“It can’t be artificial,” Pirozhkova said, explaining that while more women have had the opportunity to compete in sports, there has not been the same growth among women coaches.

But she predicted that the number of female coaches and their salaries will go up in the years to come, as the growing number of elite female athletes come to the end of their playing careers and seek additional ways to stay connected to their respective sports.

Arizona State University vice president of athletics and athletics director Ray Anderson said that Arizona State is working to create more opportunities for female coaches and agreed with Pirozhkova’s notion that it has to first be based on talent.

“At the end of the day, you’ve got to make sure that the, particularly the head coaches for your student athletes, are in fact the very best available for your program, notwithstanding their gender,” Anderson said. “That being said, you want to make sure that when you have an opportunity that you really work hard to make sure that your slate is diverse and we certainly do that here.

“Part of what we need to do is to be a model for encouraging other folks to continually look for opportunities to include appropriate women in (their) pool of candidates,” Anderson said.

Arizona State’s female coaching numbers were consistent with the the numbers in the Brooklyn College study. Out of the Sun Devils’ 22 head coaches as of July, five are women, or 1 out of every 4.4 head coaches at ASU.

Anderson and several female athletes said they are confident that as women continue to make gains in sports, the number of women coaches will become more in line with the number of female Olympians.

Anderson has worked to expand women’s sports at ASU since his arrival in 2014, announcing the addition of NCAA women’s triathlon and NCAA women’s lacrosse in May as ASU’s 24th and 25th varsity sports.

Named by Forbes Magazine as one of the 25 Most Influential Minorities in Sports in February, Anderson said he is personally invested in continuing to eliminate sex discrimination, as well as any factor that could potentially take away an athlete’s right to play a sport.

“I grew up in a period where my sister, who’s older than I, didn’t have the opportunities where she could really visualize going to college on an athletic scholarship for instance, because there just weren’t as many opportunities for women,” Anderson said.

“Now fast forward, women coming through the junior ranks, high school ranks can look up and know that there are multiple varsity sports for women at the collegiate level,” he said.

Anderson said Title IX is the primary reason that so many more women are able to compete in international competitions now.

“Sometimes you need to force change, and Title IX was a change that forced some folks to do some things that otherwise they wouldn’t do – i.e. add more women’s programs, more opportunities for women to compete at an elite level,” Anderson said. “The result again is that more women are doing so and therefore the Olympic numbers have risen and will continue to rise, hopefully.”

The change that Anderson spoke of is what would eventually lead to the 1,000th U.S. Olympic medal overall, which was won by a group of female swimmers – Kathleen Baker, Lilly King, Dana Vollmer and Simone Manuel – in the 4×100 relay Saturday.

“I’m really happy with what happened with Title IX because everybody needs to have a chance, an equal chance or an opportunity,” Comaneci said. “Sports is the one thing that allows everybody to experience that and be a part of it.”