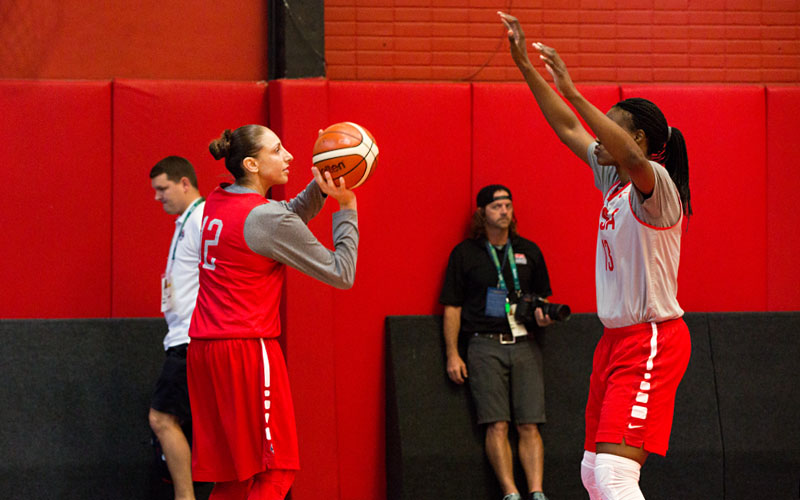 RIO DE JANEIRO — Already one of the most decorated women’s basketball players of all time, Phoenix Mercury guard Diana Taurasi is still breaking records. This time, it was her own.

Just two days after tying her own U.S. Olympic mark of five three-pointers made, Taurasi broke that record during Wednesday’s group play victory over Serbia.

In the third quarter, Taurasi hit her sixth shot from behind the arc with 8:44 left, setting a new record. In the same game, she also set a new U.S. Olympic mark with 10 three-point attempts.

“When I look back on it, you don’t get many opportunities in this game, so the other night I just took advantage of it and it felt good,” Taurasi said after Thursday’s Team USA practice at Flamengo Club.

The three-time gold medalist is making her fourth Olympic appearance and has dropped hints that it may be her and fellow University of Connecticut alumnae Sue Bird’s last run at another gold.

“Every time we’re on the court together, on the bus together, there’s something different about this time than in London where we kind of both know this could be the last one for us,” Taurasi said. “We try to embrace the moment a bit more, we try to understand each other a little bit more.”

Bird echoed Taurasi’s sentiments, and added that the duo is also cherishing what could be their last time playing for Geno Auriemma, their former coach at Connecticut who is leading Team USA at the Olympics for the second time here in Rio.

“It really is a special experience and one that we’ve enjoyed,” Bird said. “There’s been some ups and downs, and to finish with gold medals around our neck is of course the goal, but for myself and for (Diana) even you know it’s got a little extra to it because it’s Coach Auriemma, and it could be the last time.”

The women’s basketball team has a 44-game Olympic winning streak dating back to the bronze medal game at the 1992 Barcelona Olympics.

Sue Bird and Diana Taurasi have been a part of the historic run since 2004 in Athens.

If the United States wins another gold medal, the two former Connecticut teammates will join Teresa Edwards and Lisa Leslie as the only basketball players, male or female, to ever win four gold medals. If the U.S. men’s team wins gold, Carmelo Anthony would become the first man to join that group.

When Auriemma was asked what it’s been like to see Taurasi’s growth since she arrived in Storrs, Connecticut, as a freshman out of Chino, California in 2000, he took a deep breath, and a moment to reflect on the past.

“What it’s like coaching Taurasi? You know that would have to be like a book or a miniseries or something because she’s just a complex human being,” Auriemma said. “But I don’t think I’ve ever had more fun in anything in my life in the four years I spent with her at Uconn and these last eight years with the Olympic team, that’s about as much fun as you could have coaching.”

The star-studded squad also became the first women’s team to break the 100-point mark in three consecutive games in the Olympics when it scored 110 points in Wednesday’s victory over Serbia.

However, Taurasi thinks her team has not peaked just yet.

“I think we still have room for improvement, I think there’s certain things we need to get better at and we will,” she said. “This team is confident, but we know the minute we take the eye off the ball, things might get shaky for us, but you know we’re focused and ready to go.”