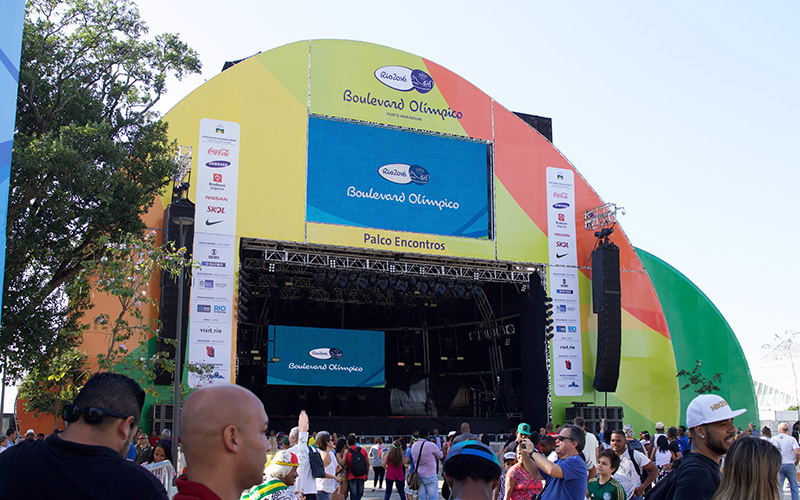 The city created the biggest live site in Olympics history, according to the Rio 2016 website. (Photo by Scott Bara/Cronkite News).

RIO DE JANEIRO — Marcela Sikora celebrated her return to her home country by gathering with fans from around the world at one of three Olympic Boulevard live sites on Friday night to watch the Opening Ceremony.

“It’s just amazing… I’ve never seen so many other people from other countries in Brazil,” said Sikora, who left her home in Sao Paulo to play volleyball at Arkansas Tech University and has lived in the U.S. ever since. “It’s a very nice vibe, and I’m enjoying every single minute of it.”

Rio’s city government set up the Olympic live sites, or festival areas where fans can celebrate in three different spots across the city – Porto Maravilha, Porto Madureira and Campo Grande. According to Rio 2016 website, the city has created the biggest live site in Olympic history.

Each site includes food trucks, bars, live music, live screenings of competitions and sponsor-run activities along with a variety of exhibitions and art performances.

The sites are free to the public and are open every day until the end of the games on Aug. 21.

Michael Harney is attending his third Olympics for Cartan Tours, a California company that coordinates events, hotels, transportation and other accommodations for countries traveling to the Olympics and often times for parents of athletes. He was working at the live site with some of those families.

“Thousands of people are out here to watch the games on television so you can feel the passion and see it everywhere around you,” Harney said.

The festivities have been underway all afternoon at #OlympicBoulevard for the #Rio2016 opening ceremonies! pic.twitter.com/WT4lsQidvB

The Olympic Boulevard in downtown Rio stretched along the piers on the Guanabara Bay. Thousands of people peppered the boulevard’s plaza.

Patrick Forrest, who strolled among the live site features on Friday, has been living in the Copacabana neighborhood in the city for six months studying business at Fundacao Getiulio Vargas, a university in Rio.

Forrest, a senior at the University of South Carolina, decided to stay in Rio for a few weeks before heading back to the U.S. so that he could take in the Olympics.

“I think this gives a good opportunity for everyone to see the highlights of Rio and the Rio culture to bring everyone together in one place,” Forrest said. “I think it’s really cool that everyone gets to see Rio for as it really is.”