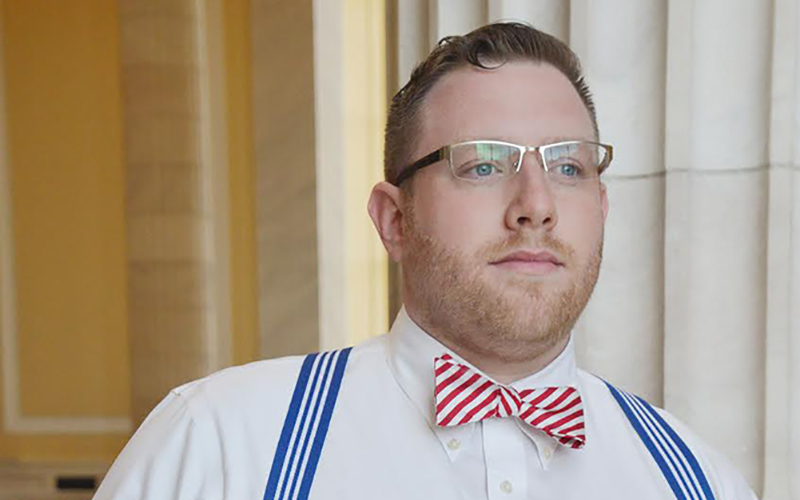 Matthew Shuman, a leader of the Arizona chapter of the Log Cabin Republicans, said it “felt horrible” to watch his party adopt a platform that was strongly anti-LGBT. But he said his affiliation to the GOP goes deeper than any one issue. (Photo by Lucas Carter/courtesy Matthew Shuman) 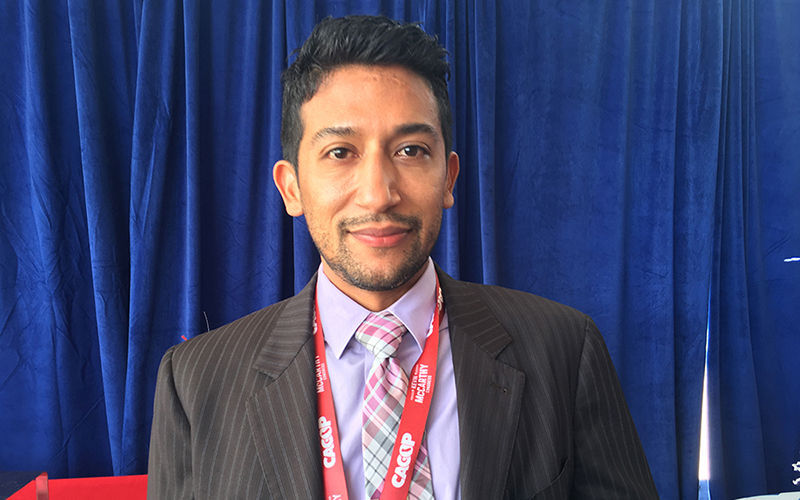 Juan Hernandez, an active member of California’s Log Cabin Republicans, is a supporter of Republican presidential nominee Donald Trump. Hernandez, who was assaulted at a Trump rally this spring, said it was easier to come out as gay than as pro-Trump. (Photo by David Marino Jr./Cronkite News) 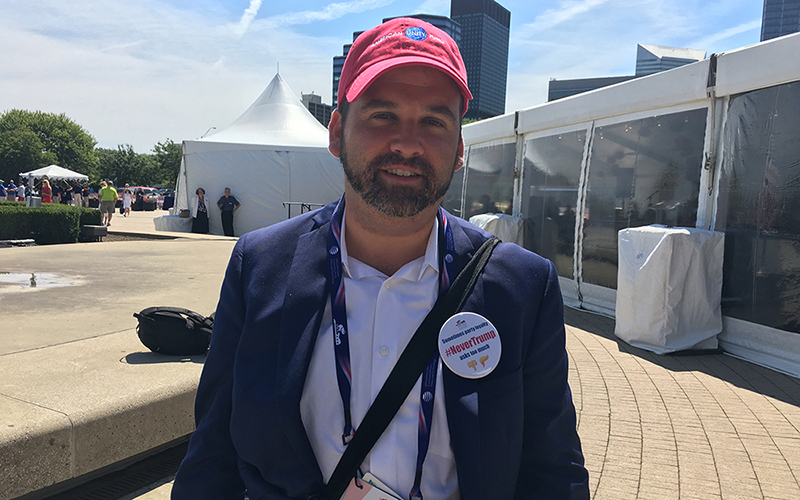 Republican convention delegate Christian Berle from Washington, D.C., thinks his party is “flat-out wrong” in its position on LGBT issues. But he says that’s a reason to stay and work to change those opinions, not to leave the party. (Photo by David Marino Jr./Cronkite News)

Matthew Shuman looks forward to voting for Donald Trump this fall and said he agrees with the Republican Party on most everything, including its policies on national security, gun rights and economic liberalism.

Shuman, who shuttles between Scottsdale and Washington, D.C, where he works on veterans’ issues, is an openly gay member of a GOP that recently adopted “the most anti-LGBT platform the Republican Party has ever had.”

“I’m not a single-issue voter,” said Shuman, a vocal supporter of LGBT rights explaining his party membership. “If I wanted to vote on one issue, I would probably be a Democratic voter. But for me, it’s beyond that.”

His stance echoes that of the Log Cabin Republicans, a group whose message is that you can be a member of the LGBT community and still be a conservative.

It’s not always an easy sell. Shuman, a leader of the Arizona chapter of the Log Cabin Republicans, said he was devastated last month when the party’s platform committee voted down several pro-LGBT amendments.

The party’s 2016 platform instead condemned Supreme Court rulings that recognized the right to same-sex marriage and protections for business owners whose religious beliefs prevent them from serving same-sex couples. The platform included planks supporting parents’ rights to “determine the proper medical treatment for their minor children” – an apparent reference to conversion therapy that is supposed to make patients heterosexual – and calling proposals to open school bathrooms to transgender individuals a move that is “illegal, dangerous and ignores privacy issues.”

The Log Cabin Republicans took out a full-page ad in USA Today ahead of last month’s Republican National Convention calling the platform out of touch, and the most anti-LGBT platform ever for the party. The ad was not subtle: It screamed “Losers! Morons! Sad!” in capital letters.

“I felt horrible,” Shuman said of watching deliberations on the party’s platform. “It hurt my heart to be involved.

“My heart aches because the Republican Party is not following the 60 percent of young Republicans who do support gay marriage,” he said.

Christian Berle thinks the party “is flat-out wrong on LGBT issues.” But he sees that as a reason to stick with the party, not abandon it.

“I’m seeking to work within the Republican Party that is flat-out wrong on LGBT issues. But if it’s ever going to change it’s going to change from the inside,” said Berle, a Washington, D.C., resident.

Like Shuman, Berle said he is in synch with the party on most issues. He formerly served as deputy director of the Log Cabin Republicans and said he worked on Sen. John McCain’s 2008 presidential campaign as a liaison to social conservatives. He said his sexuality then was not an issue.

But Berle is no fan of Trump, whose selection of Indiana Gov. Mike Pence as his running mate “shows he is not a friend of the LGBT community when it comes to governing.”

Pence last year signed the Religious Freedom Restoration Act, which would have allowed religious belief as a defense against lawsuits, but was perceived as a law that would let businesses to discriminate against LGBT individuals. Pence later signed a revised version of the law that banned discrimination in certain areas.

But Juan Hernandez believes in Trump. A member of the Log Cabin Republicans in the San Francisco area, Hernandez made headlines earlier in the year when he was assaulted by protesters at a Donald Trump rally he was attending in Santa Clara, California.

Hernandez – who said in a Washington Post article that it was “harder to come out as a Donald Trump supporter than it was to come out as gay” – said that what he likes about the Log Cabin Republicans is that they are people he can relate to as an openly gay conservative.

“We’re all fighting for the same thing,” said Hernandez, who said he has lost friends over being a gay Republican.

“I’m still fighting for LGBT rights, but within the Republican Party,” Hernandez said. “That’s why my peers in the Log Cabin, it feels really good to have that support.”