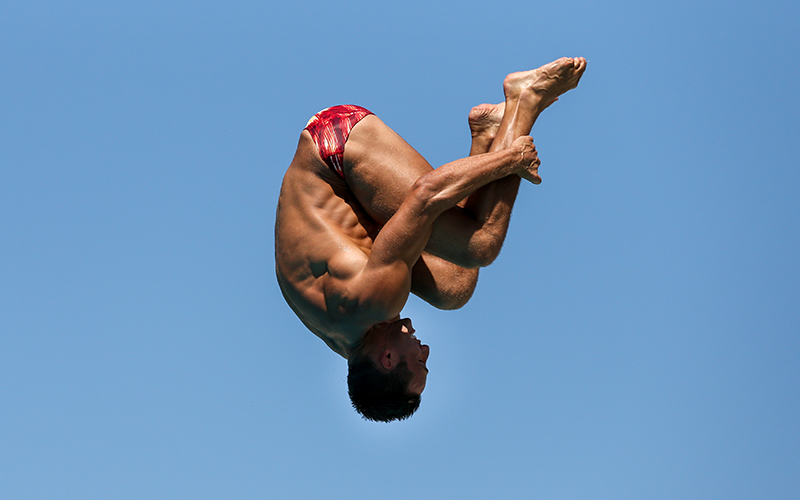 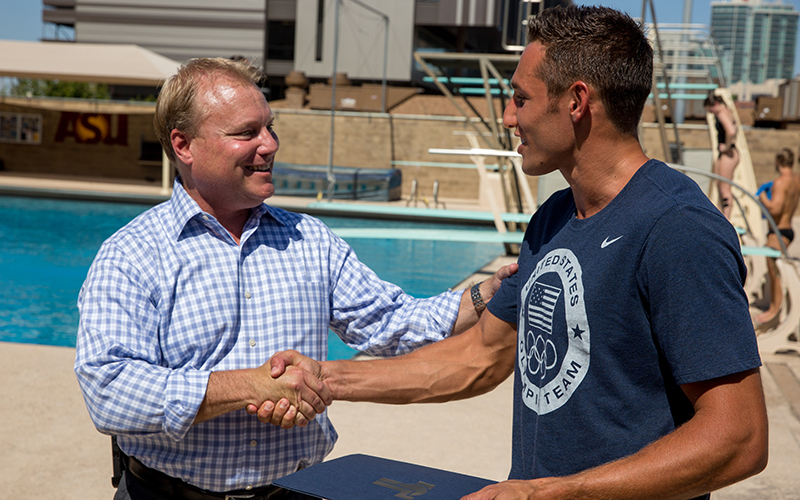 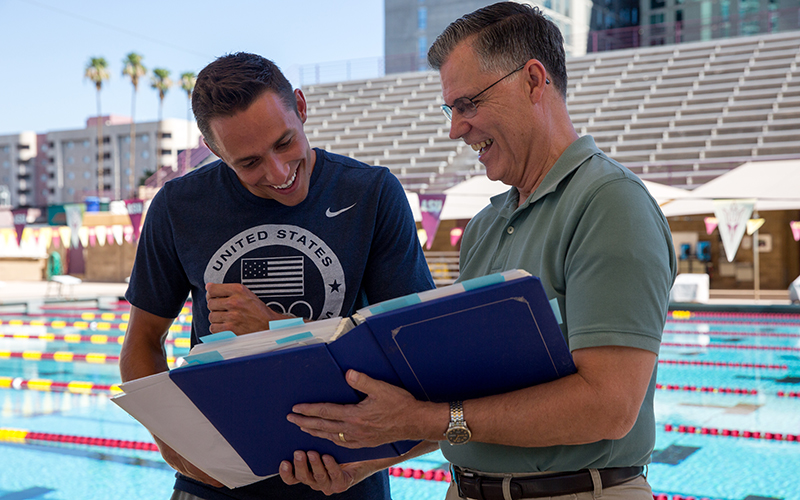 Sam Dorman (left) and his most inspirational elementary school teacher, Tom Porter, look through photos Porter collected of Dorman while he was in school. (Photo by Courtney Pedroza/Cronkite News) 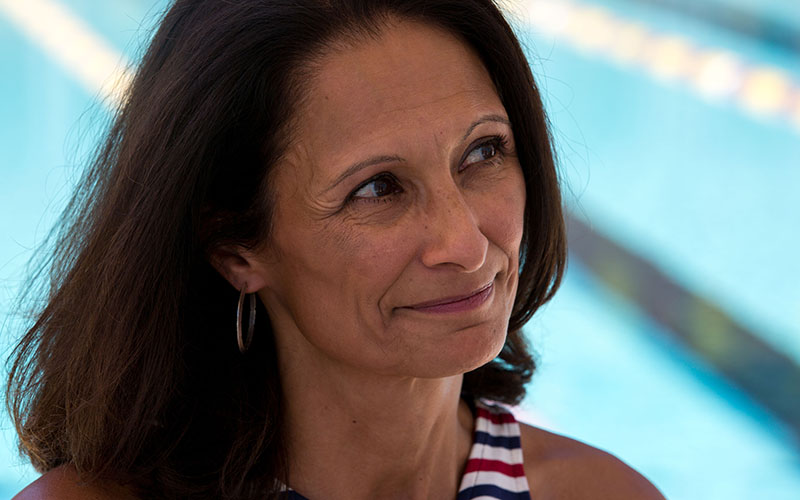 Marla Dorman sits for an interview about her son, Sam Dorman, and how she is preparing to watch him dive in the 2016 Olympic Games. (Photo by Courtney Pedroza/Cronkite News)

Each dive an Olympian takes is only about two seconds long.

But when synchronized diver Sam Dorman finally plunges into the pool at the 2016 Summer Olympics in Rio on Wednesday, it will be the culmination of a nine-year journey.

When Dorman began diving at age 8, he would spend long days at the pool.

Often, these long hours mixed with the intensity that comes with training at a high level can lead to injury. Dorman has suffered his fair share, from a broken hand during his first ever dive to a herniated disk in his back. But after winning six national titles in the last nine years, the 24-year-old knew he had a realistic shot at making the Olympics.

Now, the Tempe native is in Rio with his partner, Michael Hixon, to compete in his first Olympic Games after dominating at the synchronized diving trials in June.

“I think knowing our potential going into the Olympic trials it was very obvious that we had a good shot,” Dorman said.

Dorman said instead of feeling intimidated by competing in the Olympics for the first time, his focus as his competition in Rio approaches has been on keeping his mind and body healthy.

A previous version of this story gave the wrong date for Sam Dorman’s competition. The men’s 3-meter synchronized springboard event will be held Wednesday, Aug. 10. The story here has been updated, but clients who used previous versions of the story are asked to run the correction that can be found here.

“I’m not trying to think of [the Olympics] as this big thing and put a lot of pressure on myself because it’s another competition against the same people we have competed against,” Dorman said.

Three-meter synchronized diving consists of two team members performing the same dive simultaneously off of a spring board. The divers are scored on how synchronized they are in every element, including the time it takes to spring off the board, their performance in the air and the moment they hit the water.

To the surprise of many, Hixon and Dorman had never before competed together before the trials.

Dorman, who lives in Miami and and trains at the University of Miami, grew up in Tempe and attended Marcos de Niza High School. He dove with the Sun Devil Divers club team at the Mona Plummer Aquatic Center.

Until he was 18, Dorman dove in Tempe under the guidance of Marc Briggs, his club coach.

“He had the strength, speed, quickness and was tough,” Briggs said. “You knew he had a good shot at going to the Olympics early on.”

Dorman left Tempe when he received a scholarship to dive at Miami. As a Hurricane, he was the NCAA 3-meter champion in 2015.

“It’s a process,” said Marla Dorman, Sam’s mother. “It’s not like you wake up one day and become an Olympian.”

Where it all began

“I think diving with that and seeing that was really cool and inspiring,” Dorman said.

Dorman said winning his first national title at age 16 was unexpected and “eye opening.” He saw the real potential in his diving, something that could lead him all the way to the Olympics.

The feeling was “like winning the lottery, but I didn’t win money and worked really hard for it,” he said.

All in the family

For a parent of an aspiring Olympic diver, meets and competition can redefine the idea of a day off.

“All of our ‘vacations’ have been made up of going to one dive meet and then another, and that’s OK,” Paul Dorman said. “We’re all in.”

Athletics run in the Dorman family. Marla runs marathons, and his father Paul is a retired physical education teacher at Gililland Middle School in Tempe. Dorman claims he got his athletic ability mainly from his father’s side of the family, while he and his mother push each other through each of their own respective trainings.

Men’s diving in Rio begins on Sunday and will run through the end of the games, with Dorman’s event on Wednesday.