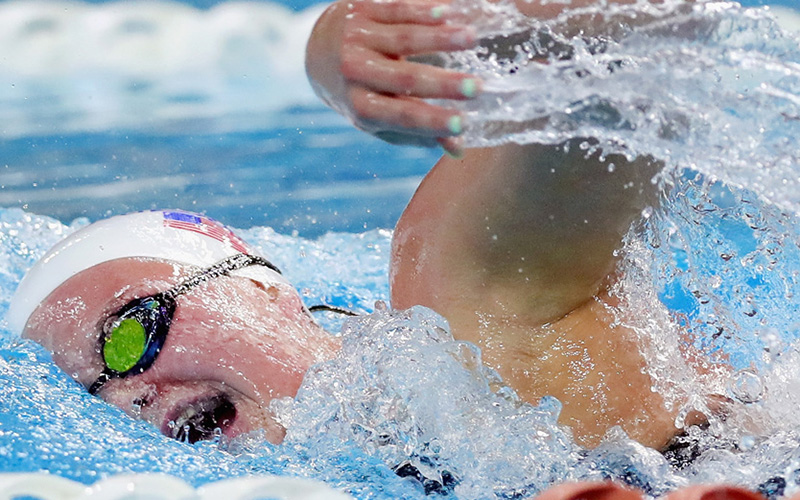 Cierra Runge said her parents had to tie pool noodles around her waist because she would run into the pool before she knew how to swim (Photo courtesy USA Swimming).

“My parents had to tie a pool noodle around my stomach because I would just run in the pool before I knew how to swim,” said Runge of her time growing up in Cochranville, Pennsylvania, about an hour west of Philadelphia.

Now, after taking a year off from the University of California, Berkeley to spend a year training in Arizona, Runge is a Team USA Olympic swimmer who will take her shot at earning a medal in the 800-free relay.

Runge, 20, has trained and competed in swim meets since she was a young girl. Her coach, Bob Bowman, is the Arizona State University and Team USA head swim coach. She’s also been able to watch and learn from Olympians Michael Phelps and Allison Schmitt, both in the last year in Arizona and when all of them, including Bowman, were at Baltimore Aquatic Club.

John Cadigan, the director of operations of Baltimore Aquatic Club, has known Runge since her first day at BAC and has watched Phelps and Schmitt progress in their careers before they moved west to Arizona.

“One of the things you notice about all of them is they’re very humble,” Cadigan said. “They’re just normal folks who have worked really hard and had a big dream, been lucky enough to chase their dream and lucky enough to get there.”

Runge said one of the most important things she’s learned from Phelps and Schmitt is “to have fun in what you’re doing and not to completely stress out and wig out. If you’re having a bad race or bad day, you’re not a bad swimmer.”

In addition to bonding with Phelps and Schmitt on a professional level, the athletes have bonded as friends, singing country singer Thomas Rhett’s “Die a Happy Man,” Schmitt’s favorite song, or chanting Bon Jovi’s “Living on a Prayer” lyrics when they’re halfway through a set during training.

Runge began swimming competitively at 4 years old, when her first instructor gave Runge one lesson, watched her swim with ease and immediately told her she should swim on a team. Her parents, hesitant at the idea since Runge was so young, were persuaded by the instructor’s persistence and placed Runge on a team.

Although the idea of competing in the Olympics had always been in the back of Runge’s mind, it didn’t seem realistic until two years ago. In 2014, she made her first national team and won silver at the Pan Pacific Swimming Championships.

“That’s when it hit me, and I thought, ‘this is real’,” Runge said. “I could actually do this in two years. Since then it’s been like, ‘OK, let’s keep going.’ Last year I went to Worlds and then this past year it’s kind of been like putting the blinders on and keep going.”

After her first year in college, Runge decided to take a break from school at UC Berkeley, where she and her 800-free relay teammates Elizabeth Pelton, Caroline Piehl and Missy Franklin broke the NCAA and American record at the PAC-12 Championship by more than two seconds.

She devoted all of her time to swimming this past year and traveled to Arizona to train with Phelps, Schmitt and Bowman, who relocated from Baltimore to Arizona when he landed his position as swim coach at ASU.

“I really enjoyed being out in Arizona for the year and being able to see the desert, since I’d never been out there before,” Runge said.

It’s officially official!! I am RIO BOUND!! Words cannot describe the feeling of making my first Olympic Team and fulfilling a lifelong goal. Thank you to everyone who helped me get to this point! ?????? #rio2016

When Runge traveled to San Antonio, Texas, for Olympic training, she quickly developed a strong bond with her fellow Team USA athletes.

“We get along really well,” Runge said. “It’s not about us anymore, it’s about Team USA and representing our country and swimming as fast as we possibly can not only for ourselves but for our team and the millions of people behind us back in the States.”

It helps that Runge is among 29 other Olympic first-timers on Team USA, and she said the experienced swimmers are more than willing to give her and her teammates advice.

“Yes, it is my first time but we’re in this altogether and the veterans are helping us through it,” Runge said. “We’ve got each other’s back.”

Cadigan believes the veteran members of the team will be very helpful to athletes like Runge who are making their first Olympic appearance.