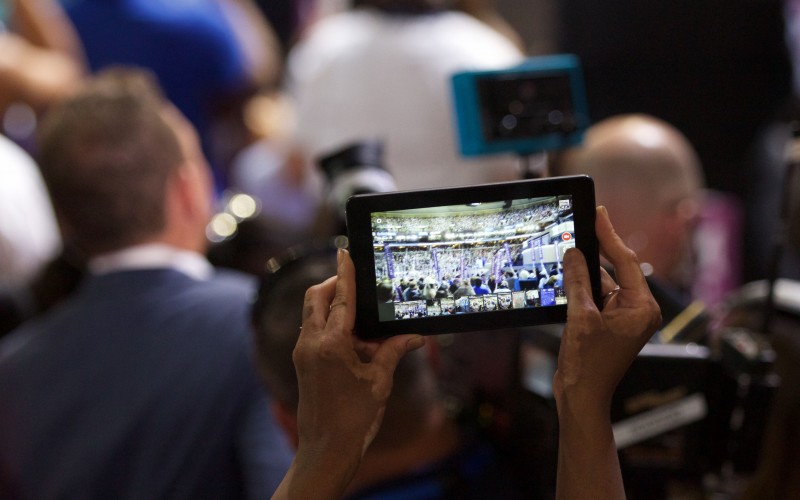 Arizona delegates watched speeches and performances throughout the week at the DNC in Philadelphia. (Photo by Kelsey DeGideo/Cronkite News)

As part of our multi-platform coverage, the engagement team at the Cronkite Public Insight Network Bureau reached out to Arizona delegates who opted in to receive text messages. This allowed us to capture the experience through their eyes. The result gave audiences an opportunity to see the conventions explained and unfiltered. Here’s how we did it:

We worked with our audience from the beginning

Cronkite News regularly uses the Public Insight Network to collect audience feedback. PIN is an online community of more than 210,000 people who have volunteered to be sources for journalists around the country, including here in Arizona. To get the audience invested in our conventions coverage, we asked readers and viewers what questions they had about the conventions and what they’d want to hear from delegates. That query gave us almost 50 responses to consider when developing coverage.

Then, we kept the audience involved. Several of the daily text questions to delegates came from Arizona residents, ranging from what it would take to make Arizona “blue” to what conventions look like behind the scenes. Even now you can tell Cronkite News how you’re feeling this election season. Here is an example of a response we received to one audience-inspired question, “Is the GOP at a historic crossroads?” We got responses directly, and we got them quickly

Through our partnership with the startup GroundSource, a text-messaging platform designed for journalists, we were able to text Republican and Democratic delegates every day of their respective conventions. Texting is conversational and efficient: People reply quickly and generally stay concise. We even had the chance to get multimedia in the form of photos immediately after the big speeches each week.

Here’s how the texts looked to delegates:

This is how the texts appeared to us in the GroundSource feed: We visualized the responses online and on air

The speed of text-message coverage is great, as are the opportunities for delivery. We created new visuals with the responses daily, often in a matter of hours. Tools like Photoshop and Adobe Spark, a visual presentation tool, enabled Cronkite journalists to create quick displays for our audience that performed well on social media.

For example, in these stories delegates had the chance to explain why they became delegates in the first place:

Online, we shared GOP delegates writing to missing Republicans and reflecting on the state of their party. Democratic delegates discussed the “Bernie effect” on the party platform and revealed what Arizonans couldn’t see from watching at home.

We continued the conversation

Beyond our daily texts, we are establishing relationships with our delegates to get further insight. Within our text messages, we guided delegates to the coverage they contributed to, while encouraging them to send their own updates and opinions.

Here’s what Julie Lind, a Republican delegate, had to say about receiving texts as a Cronkite News source.

“Texting responses to reporters questions was very convenient. Follow up confirmations for quotation permission is essential. … I think your coverage was interesting and engaging. I am glad I participated and glad I was asked to take part. The only problem I would anticipate would be the difficulty a person can encounter with the lack of tone and context that is frequent with text only. I think that could be overcome with a hybrid of verbal and text communication.”

Direct contact created a personal connection to delegates outside of their collective political identity. We’re exploring opportunities to improve and employ these techniques throughout the political season.

If you want to be a part of the story, you can become a source for the Public Insight Network by clicking here.