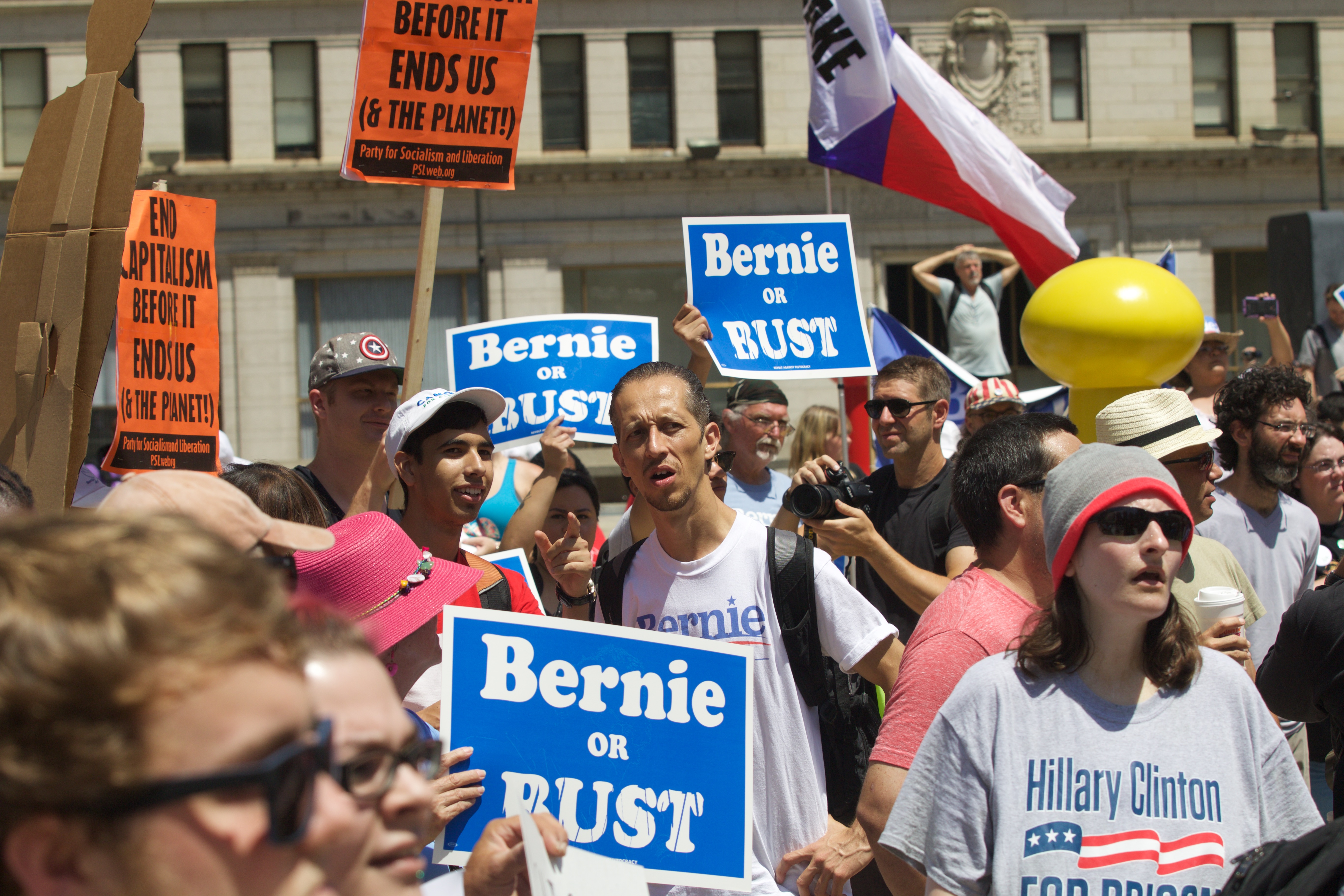 PHILADELPHIA – Arizona native Jason Hurst came to Philadelphia with a message for Democrats on the night they were expected to formally nominate Hillary Clinton for president: “I can’t stomach the thought of even voting for Clinton.”

Hurst was among the hundreds of “Bernie or Bust” protesters out Tuesday – supporters of Vermont Sen. Bernie Sanders – who were refusing to let go of his campaign even though Sanders himself has urged them to vote for Clinton, his former rival.

It was a continuation of protests that began Monday, the first day of the convention, with Sanders supporters shouting down or chanting over speakers at the convention, even booing Sanders when he called on them to back Clinton and help defeat Republican nominee Donald Trump.

The protests reached a crescendo Tuesday when Sanders delegates left the convention arena after Clinton clinched the nomination and they briefly staged sit-ins outside Wells Fargo Center as well as in the media workspace, where they were surrounded by police and reporters. Many of the protesters earlier in the day were like Tucson resident John Sailors, who took three buses to get to Philadelphia to protest the demise of Sanders’ campaign.

“We’re sick of the system and we want real change to happen,” said Sailors, a University of Arizona student.

Despite their candidate’s defeat, the rally had a mood of defiance from the people who worked for Sanders campaigns up until now. There were speakers, rappers, singers and activists pushing the “Bernie or Bust” message with allegations of Clinton’s ethical lapses compared to what they see as Sander’s decades of political consistency. The “Bernie or Bust” rally had performers and speakers lead the event Tuesday. (Photo by Kelsey DeGideo/Cronkite News)

Bass notes vibrated through the crowd of hundreds who turned out at Thomas Paine Square to bring what Sailors called a message of democracy, equality and affordable college tuition. Signs and flags whipping in the wind proclaimed “Hilary lies, why would she stop now?”

Most of all, the Sanders crowds came with the belief that the system was rigged against their outsider candidate and in favor of Clinton.

“My friends in Tempe, of a younger crowd, are just absolutely fired up about this,” said Hurst, a former Tempe High School teacher.

He said he came to the rally despite his dislike for group protests or meetups embodied in the “Bernie or Bust” movement.

People were swaying and sweating in the humid July air, their fists punching the air across the street from Philadelphia City Hall as speakers and rappers delivered the movement’s message in a sing-song cadence “With or without Bernie, we will keep going,” was a popular refrain.

Opinions were split between those who felt abandoned by Sanders and those who felt they had to stick with him and the system, in their opinion, worked against him. Many said they felt unwelcomed by the Democratic Party that give the nomination to Clinton Tuesday.

For those in the “Bernie or Bust” movement, coming to the “bust” part of that equation was like “a slap to the face,” Hurst said. He said that he could never collaborate with the Democratic Party if it continues to discredit Sanders.

Hurst and others pointed to he Wikileaks release last week of thousands of Democratic National Committee emails that show the party working to support Clinton and beat back a Sanders challenge.

“It’s time for us to move on, and do better things,” Hurst said. “I don’t think four months will pass that something won’t happen again, like another scandal, for Clinton … and that’s just what Trump needs.”