Sen. Bernie Sanders, D-Vermont, endorses rival Hillary Clinton for the Democratic presidential nomination at a New Hampshire rally. But some Sanders supporters are turning to the Green Party rather than vote for Clinton. (Photo by Brian Snyder/Reuters) 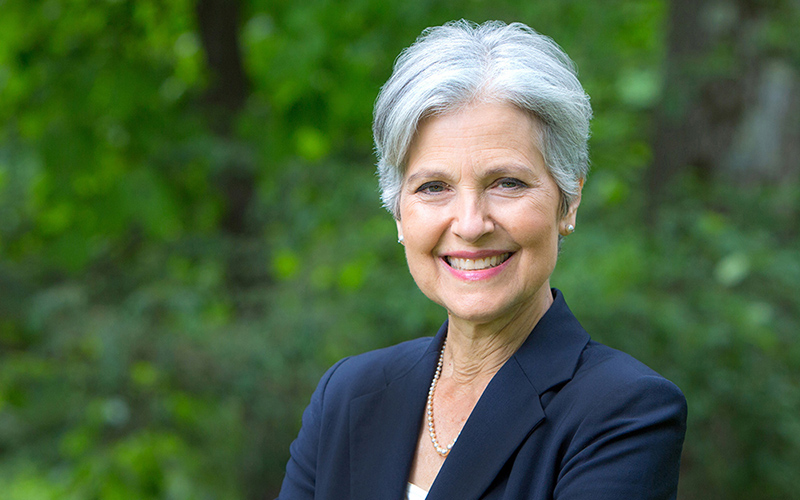 Jill Stein, the Green Party’s presidential candidate, is being considered by some disgruntled Democrats instead of Clinton. But others fear that a vote for Stein will help Republican presidential nominee Donald Trump. (Photo by Lisa Abitbol/Green Party)

WASHINGTON – When Bernie Sanders announced his endorsement of presumptive Democratic nominee Hillary Clinton earlier this month, Phoenix Sanders supporter Susan Martin turned to what she believed was the only other option: the Green Party.

“I filled out the form at work to change to the Green Party,” Martin said. “Jill (Stein, the Green Party presidential candidate) is the only choice that I have to vote for my conscience.”

Martin wasn’t the only one who felt that way. The Green Party’s national spokesman Scott McLarty said he has seen a “flood” of emails from pro-Sanders voters looking to possibly make the switch.

Sanders supporters have been no more amenable at this week’s Democratic National Convention, where protests and chanting have disrupted the party’s nomination of Clinton over Sanders.

“People who can’t bring themselves to vote for Hillary Clinton,” McLarty said. “Hillary Clinton represents a kind of politics that is not serving the country very well.”

Arizona Green Party Co-Chair Angel Torres said that Sanders supporters in the state had started turning to his party even before Sanders’ endorsement of his one-time rival.

“We usually see three Green Party members at our monthly social,” Torres said. “But at the social at the end of June, we had 12 Sanders Democrats who had worked on his campaign show up.”

He said the party had received many emails and social media posts offering support from Sanders Democrats, even though it was not clear at the time that Stein would even appear on the Nov. 8 ballot in Arizona.

The Green Party missed a June 1 deadline to name its presidential electors, which could have prevented Stein from appearing on the November ballot. But a court this month approved an agreement between the party and Arizona Secretary of State Michele Reagan to allow Stein on the ballot.

Sanders supporters see similarities between their movement and the Greens, one of the biggest being the Green Party’s refusal to take corporate campaign donations.

Sanders volunteer Julia Sayre of Phoenix said that is in line with Sanders’ call for campaign finance reform. She compared it to the fact that Sanders funded his campaign mainly with small donations of about $25, instead of through corporate sponsors.

“He (Sanders) proved it could be done on a presidential level,” Sayre said.

McLarty said it made sense for Sanders’ supporters to come to the Green Party, as many of them are “very sensitive about Hillary Clinton’s close ties to Wall Street.”

“No serious person can expect Hillary Clinton to stand up to the power of Wall Street,” McLarty said.

Despite the attraction, however, some Sanders Democrats said that they felt they have to vote for Clinton at this point in the election.

“I would caution them against that (voting for Stein) because, look at Ralph Nader,” said Michael Gordy, an Arizona Sanders supporter, referring to the third party campaign that some believe cost Democrat Al Gore the presidency in a tight race against Republican George W. Bush.

“He (Nader) had a lot more name recognition than Jill Stein. This country cannot afford to have Donald Trump as president,” Gordy said.

But McLarty said that many Sanders supporters felt that, with Clinton and Trump, there is no longer a major party candidate that they could agree with enough to support. He cited the Greens’ similarities to Sanders on issues of global warming, mass incarceration, war and wealth inequality as areas where Sanders voters could find common ground with the Greens.

Many of those who have switched agreed, saying they had lost faith in the two-party system and felt that they had to turn to a third-party like the Greens to see their interests represented.

Larry Ward, a Phoenix Sanders supporter, said that he thought this election was unique due to the intense dislike some voters feel for both major candidates.

“I don’t think it’s a bad thing because I think our electoral system needs a wake up call,” Ward said.

Ward, who is currently looking into drafting principles for his own third-party, said his choices at this point were between voting for Stein and not voting at all.

But the Green Party does have some fundamental differences from Sanders’ principles, McLarty said. Specifically, he said that Sanders’ past support of increased military funding, drone warfare and Israel in the Israeli-Palestinian conflict are serious differences.

“He’s a lot better than Hillary Clinton, but he’s not where the Green Party is,” McLarty said of Sanders.

Despite the influx of support, McLarty concedes there was still little to no chance of Stein winning the presidency. Instead, he said the party hopes to win more than 5 percent of the vote – enough to qualify it for partial funding from the Federal Election Commission in 2020.

“We’re very realistic about our chances of victory,” McLarty said. “We’re working to get more victories at the local and state levels.”

While some, like Gordy, are concerned that the movement will split the left-leaning vote and ease the way for Trump to win the presidency, newly minted Green supporters like Sayre stood by the decision.

“I’ve had friends accuse me that if I vote for Stein, ‘You might as well vote for Trump,'” Sayre said. “I’m 58 years old. I’ve voted for the lesser of two evils too many times.”