How do Arizona Democrats pick DNC delegates? Hint: The process involves ‘lots and lots of pizza.’ 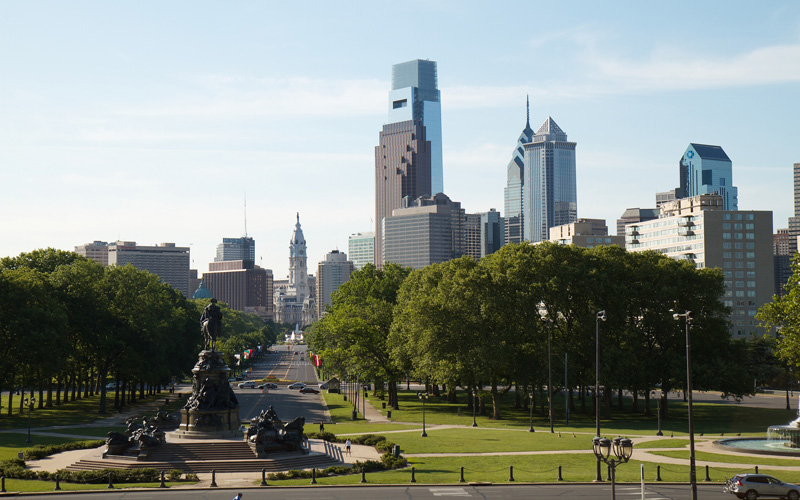 The Arizona Democratic delegation will travel to Philadelphia for the party’s national convention. This is a view of the city’s skyline from the Philadelphia Museum of Art. (Photo by Rob Shenk via Creative Commons)

PHOENIX — Hundreds of Arizonans applied to be delegates to the Democratic National Convention this year, but only 100 people will actually attend. For Philadelphia 2016, Arizona will send a delegation that includes young up-and-comers, immigrants, a 102-year-old woman and two sisters, among others.

The Arizona Democratic Party has a very intricate way of choosing delegates to reflect the population of the state through proportional representation laid out in the group’s Delegate Selection Plan.

“It used to be that the power brokers in the state would just decide who the delegate was going to be,” said Barbara Lubin, the Arizona Democratic Party’s political director. “In 1968, with all of the Chicago riots going on — there were also a lot of African-Americans in the South that were registered voters, and there were no black people who were delegates. And it was Fannie Lou Hamer who brought about the reforms.”

Hamer, a civil rights activist from Mississippi, challenged how delegates were selected.

Because of her efforts and other reforms, the party began setting specific “affirmative action” targets for how many delegates should represent specific demographic groups. These include racial and ethnic groups, members of the LGBT community and people with disabilities.

“It was critical, at a statewide level, to meet those goals,” Lubin said.

These affirmative action goals are not arbitrary. They are based on election data, U.S. Census data and, in some cases, other survey data. Party committee members sift through hundreds of applications to match faces with each statistic to create a full lineup for the DNC.

The voting process for the delegates happens in two phases. Democratic precinct committee members in local caucuses select 50 delegates. These “district-level” delegates represent the proportion of the vote each candidate received during the party’s presidential preference election.

An Arizona Democratic Party committee of 440 members, representing all state precincts, comes together to select the remaining 50 delegates. It’s a party for the party, except for the 12-hour workload the members sludge through in the process.

Lubin said the voting is efficient and intentional.

“Going into the meeting we knew, from the election at the congressional district level and the unpledged and the superdelegates, we knew who had met the criteria for youth, gender and other goals,” she said. “So we knew, going into that day at the statewide meeting, who we needed to elect.”

For instance, the members knew the final delegation needed to include an even split between men and women.

Lubin said the party chair, Alexis Tameron, read aloud short bios for each applicant, and the members cast their votes while following along with a PowerPoint presentation to accept or deny the hundreds of candidates. Lubin said there were several rounds of voting, which dragged on until midnight, and committee members considered diversity, candidacy loyalty and party involvement in determining their selections.