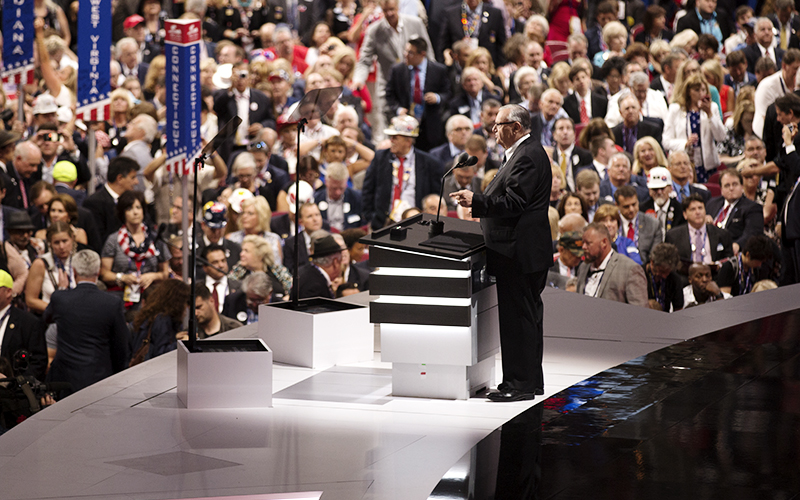 Arpaio, an early and avid supporter of billionaire businessman Donald Trump’s presidential campaign, spoke to the convention, and to a national audience, about two hours before Trump formally accepted the party’s nomination of him as its presidential nominee.

“We are the only country in the world whose immigration system puts the needs of other nations ahead of ours,” Arpaio said in a short, five-minute speech. “We are more concerned with the rights of illegal aliens and criminals than we are of protecting our own country.”

A cheering convention crowd welcomed Arpaio, breaking into chants of “build that wall, build that wall,” a reference to Trump’s promise early in the campaign to build a wall on the U.S.-Mexico border and make the Mexican government pay for it. It was an early point of agreement between Trump and Arpaio.

The sheriff lauded Trump as a strong leader who would fight to secure the border and support law enforcement officials.

“We have terrorists coming over our border and infiltrating our communities and causing massive destruction and mayhem,” said Arpaio, who was dressed in a dark suit. “We have criminals penetrating our weak border security system and committing serious crimes. I am supporting Donald Trump because he is a leader.”

Arpaio, who had a private meeting with Trump on Monday, was a surprise addition to the speaker’s lineup on the last night of the convention. Arpaio confirmed his slot in a Thursday afternoon tweet.

The Arizona delegation, dressed up and decked out in elephant accessories, waved signs chanted “Joe” as Arpaio took the stage. There was no shortage of enthusiasm from Arizona delegates, who stood and cheered for Arpaio, with some joining the “build the wall” chants with others in the crowd. 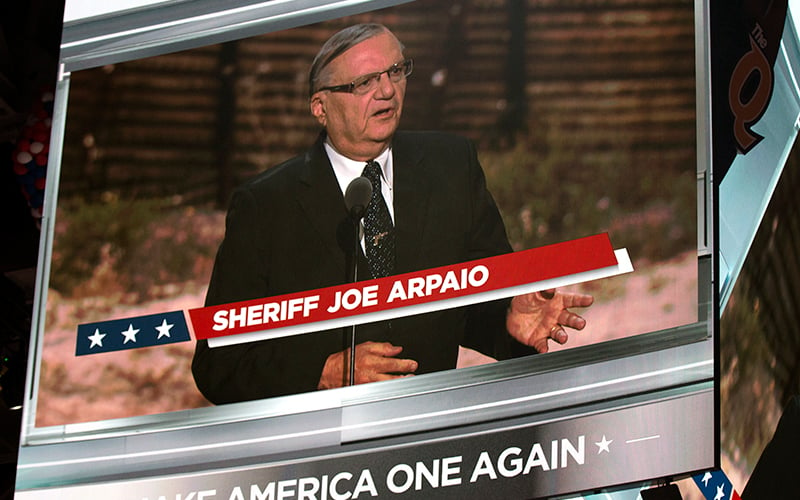 Arpaio thanked Arizona before declaring that his “most important mission” was to help get Trump to the White House.

David Livingston, a delegate from Peoria, said Arpaio’s speech was on point, noting the cheers and chants elicited by the sheriff’s remarks.

“He was right on the money,” said Livingston, draped in an Arizona flag. “Everybody loved him.”

Livingston said he and other delegates found out Arpaio would be speaking when the sheriff told delegation members as they were waiting to leave their hotel for Quicken Loans Arena.

Arpaio’s comments about illegal immigration hit home for Arizona Republican National Committeeman and Tucson resident Bruce Ash, who said his hometown has witnessed the carnage of the drug and human trafficking.

“We have to do something in order to effectively deal with the illegal immigration that comes into our country,” Ash said.

“Republicans love immigration,” he said. “All of us came here from someplace else … but we have to control illegal immigration and that’s not just at the border, it’s interior enforcement, visa overstays and all the problems that we have currently.”

John Rosado, a Phoenix delegate, said he appreciated that Arpaio didn’t sway from his persona while in the national spotlight.

“(I liked) the fact that he was being Sheriff Joe and wasn’t trying to be someone else,” Rosado said.

But while Arpaio’s speech was well received with the crowd, delegate Frank Antenori of Cochise said the sheriff’s remarks were nothing new – which he said was evidence of the need for change.

“It hits the same points every time and the reason he has to do that is because nobody’s listening and that’s sad,” Antenori said. “That’s sad that he’s been giving that speech for over 20 years and nobody hears it. Maybe somebody’s going to listen now.”