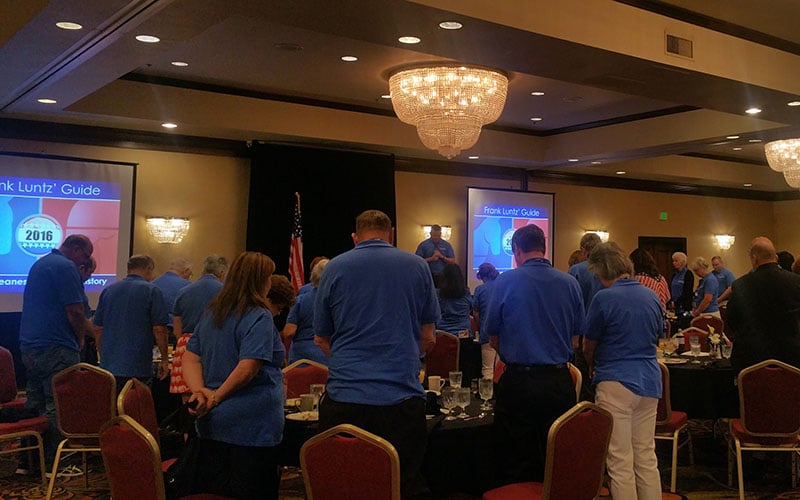 Arizona GOP delegates bowed their heads in prayer at a meeting to start their last day at the Republican National Convention in Cleveland. (Photo by Socorro Carrillo/Cronkite News) 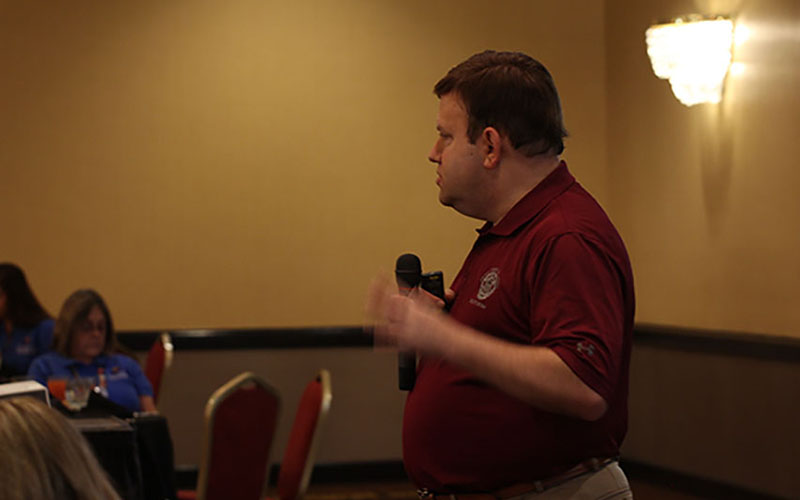 Pollster Frank Luntz told Arizona Republicans the party needs to reach out to younger and independent voters if it hopes to remain competitive. (Photo by Sophia Kunthara/Cronkite News)

CLEVELAND – Republican pollster Frank Luntz told Arizona delegates Thursday that the Grand Old Party needs to focus less on the “old” if it hopes to remain relevant in the future.

Luntz, speaking at a delegation breakfast on the last day of the Republican National Convention, said the party’s problems range from its inability to embrace social media to a focus on name-calling and class politics that does not relate party priorities to the everyday lives of voters.

Without those changes, Luntz said, the GOP will not be able to attract the independent and millennial voters it now lacks.

“For the most part, I thought a lot of what he said was true,” said Amanda Flores, 18, one of the youngest delegates from Arizona.

“I thought he made a lot of good points,” she said. “He said a lot of things about the power of social media, millennials, the role of politicians and Wall Street.”

Luntz delivered a serious message in a lighthearted manner, punctuating his address with jokes and asides that drew laughter from the dozens of delegates and alternates at the breakfast. When he asked how many in the room had an online presence, only a meager number of hands went up.

But those in the room sat up straighter when Luntz told them that, if the presidential election were held today, likely Democratic nominee Hillary Clinton would beat newly selected Republican nominee Donald Trump. Luntz said Clinton held a marginal lead in recent polls.

Luntz’s message was clear: The GOP needs to rally those who are on their own and keep them, in addition to gaining new voters, if they have any chance of keeping Arizona “red” in November. He also criticized the party for the divisiveness that has been on display this week at the national convention, telling delegates that if party members “have this attitude then Hillary Clinton is your next president.”

Jason Rose, an Arizona political consultant, echoed Luntz’s call for unity and reform, saying he wants to see the party use better tactics to gain forward-thinking voters and keep everyone together.

“The question is can the Republican party put Humpty Dumpty back together again?” Rose asked, referring to the feuding that has plagued the convention.

Rose said the party needs to become more open on issues of interest to millennial and independent voters like medical marijuana and sustainability. He praised the Arizona Republican Party’s recent moves to embrace the “sharing economy” – services like Uber ride-sharing, Airbnb and crowdfunding sites – as a step in the right direction.

“If the Republican Party were to extend itself with its Uber-like position to these other positions, I think it would be hipper. It would be cooler. It would resonate more,” Rose said.

State party chairman Robert Graham said the GOP has made improvements, but it can do better.

“The Republican Party, there’s no question that we need to improve but we’ve also improved a lot. In Arizona specifically,” Graham said.’

In terms of social media, he said the GOP is well ahead of the Democratic Party, for example.

“Just take a look at the Democrat Party and what they don’t have,” Graham said. “We’re 1,000 percent ahead of them as a way to communicate with the base, for millennial groups and minority groups. So we’re very comfortable with where we are as a state party.

“We have to improve always but we’ve had an incredible momentum,” he said.