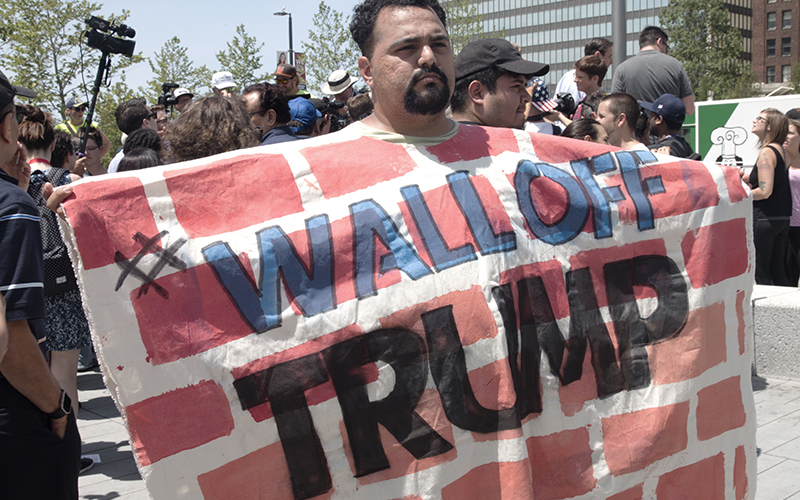 Ernesto Lopez, a protest-goer from Arizona, presents his hand-made Wall Off Trump poncho at the rally in Public Square, Cleveland. (Photo by Christopher West/Cronkite News) 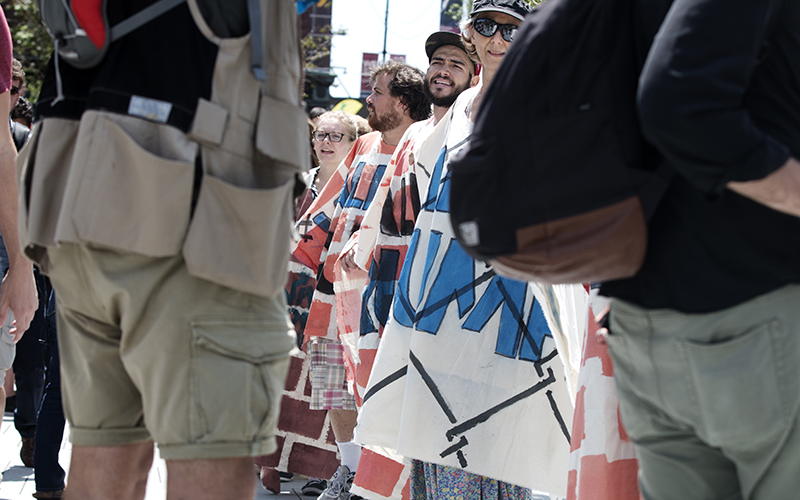 Border issues were a prominent issue at the beginning of the protest, but remained peaceful through the afternoon. (Photo by Christopher West/Cronkite News)

“I drove out here … with a couple of people from Phoenix exclusively for this action and to be here for the RNC,” said Lopez, as he and other members of Puente Arizona formed a “human wall” at the convention.

“We’re scared of the policies that Trump and the RNC are pushing forward. We feel that it is going to be detrimental, not only to ourselves, but to the nation,” he said.

It was a peaceful protest at what has so far been a largely conflict-free convention, in a town crowded with police officers from across the nation who are patrolling a zone around Quicken Loans Arena where streets have been shut down for blocks in all directions.

“Before I came I was a little nervous,” said Debbie Lesko, an Arizona delegate to the convention. “I thought, ‘Wow, this is a terrorist spot and a protest spot.”

But since arriving in Cleveland, Lesko said, “I haven’t seen a protest yet.”

The general calm was disrupted briefly just minutes after the Puente Arizona rally broke up, when members of the controversial Westboro Baptist Church began a protest in Public Square with signs and chants decrying homosexuality and calling on the crowd to repent. 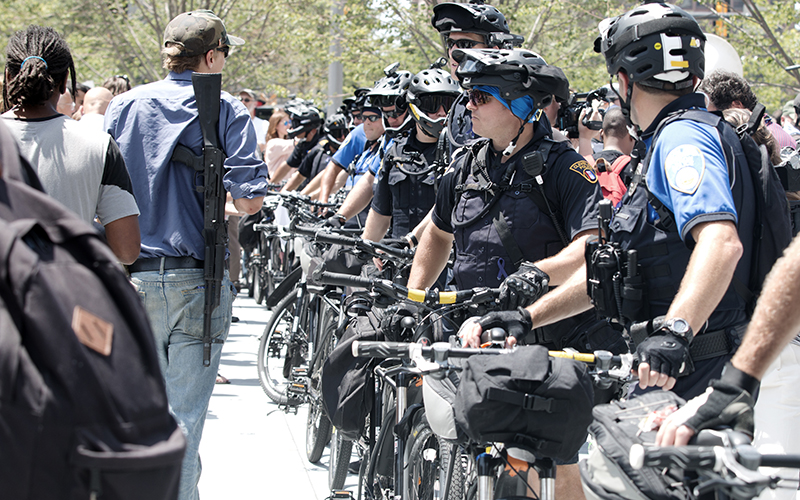 A man carries an unloaded assault weapon through the crowd as he surveys the line of officers in Public Square. (Photo by Christopher West/Cronkite News)

The score of Westboro church members were quickly surrounded by scores of police officers, who formed a wall separating the protesters from counter-protesters who began shouting back at the church members and chanting.

Several protesters were arrested after police were forced to use pepper spray on some, according to media report. Convention and police officials did not return requests for further information on the incident.

Scattered incidents have been reported in the days since the convention started Monday, but for many in Cleveland the biggest disruption has been to their daily routines.

Roads throughout downtown are lined with eight-foot tall steel fences and every corner is manned by police, soldiers or Secret Service officers. Traffic has been blocked or rerouted in many areas, most on-street parking has been prohibited and many parking garages have been closed.

“I usually bike around a lot, but I had to take the bus though because of the road blockades and gates,” said one teen.

But others say the disruptions have not been that bad, but have been blown out of proportion by the media.

“I feel safe,” said Michelle Malise, who works as a bartender downtown. “I feel like nothing’s going to happen with so much going on.”

In advance of the convention, Cleveland public transportation officials added routes and special rates for bus service through town. Lyft and Uber also made special arrangements for convention.

“It’s supposed to be busy so I came in to see if I could make some extra money,” said Harold Wagner, an Uber driver drawn to the city by the convention.

The tens of thousands of visitors and media that drew Wagner to town is also drawing protesters hoping to get their message heard, protesters like Lopez and Tania Unzueta, policy director for Mijente.

“We put a symbolic wall around the Republican National Convention – or at least as much as we could get to,” Unzueta said of the human wall that Lopez joined.

For Lopez, it was important to bring that message to convention goers who may never have seen the border themselves.

“Once you’re there, you see the militarization of the border. It’s a military zone. There’s people with guns all the time,” said Lopez, who said he has been repeatedly stopped an questioned by border officers. “So if you don’t know what it’s like to be there, it’s easy to say, ‘Let’s put a wall up’.”