Delegates from Colorado join the shouting as a rules fight broke out on the floor during the first day of the GOP convention, just hours after Arizona leaders had urged unity. (Photo by Emily L. Mahoney/Cronkite News) 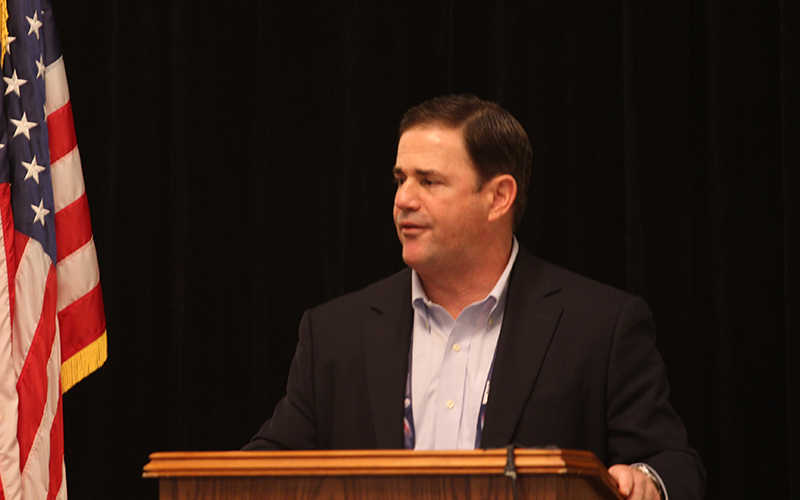 Arizona Gov. Doug Ducey reminded the state’s Republican delegation Monday that the goal of the convention should be coming together to put a Republican in the White House. (Photo by Sophia Kunthara/Cronkite News) 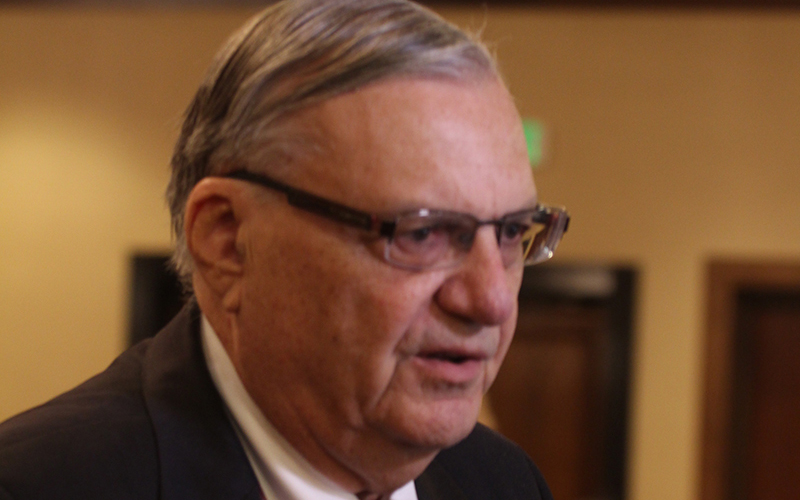 Maricopa County Sheriff Joe Arpaio asked why some Republicans will say they support the party’s nominee but can’t bring themselves to say Donald Trump’s name. (Photo by Sophia Kunthara/Cronkite News)

CLEVELAND – Arizona GOP leaders called for unity Monday as they kicked off the Republican National Convention, just hours before the party erupted into chaos over a procedural rules vote on the floor.

“Let’s clearly state our purpose here this morning, it’s to put a Republican back in the White House,” Arizona Gov. Doug Ducey said at the state GOP delegation’s breakfast meeting. “It is to a put a vice president who is a Republican back in Washington. And those Republicans are Donald Trump and Mike Pence.”

But disorder was the order during the opening session of the full convention, as a typically noncontroversial motion to adopt the rules lead to a shouting match.

The motion to accept the rules passed despite hollered “nays” from multiple state delegations. Arkansas Rep. Steve Womack’s gavel boomed through the arena as he declared the “ayes” in the majority, causing the opposition, chiefly the delegation from Colorado, to stand on their seats and chant “roll call vote.”

The “Never Trump” movement, which has pushed for delegates to be allowed to vote their conscience even if it doesn’t align with who won their state’s primary, is led by Kendal Unruh, a delegate from Colorado.

Smaller factions from other states joined with Colorado on the floor, exposing the divisiveness that the Arizona delegation had earlier dismissed.

The rest of the floor shouted “U-S-A” or “we want Trump” to drown out the opposition.

After the convention took a recess, Unruh told a barrage of press that she would reconvene with her supporters to strategize a “Plan B.”

It was the sort of display the more than 200 Arizona Republican leaders and delegates who have gathered in Cleveland had hoped to avoid.

The state delegation’s cry for a united front to nominate Trump came after Arizona delegate Lori Hack of Peoria showed up demanding her credentials and a convention vote. Hack, who had been turned away for saying earlier that she would not vote for Trump on the first ballot, as state law requires, was turned away again by party officials Monday.

During the state’s morning meeting, Maricopa County Sheriff Joe Arpaio called out Republicans who shy away from vocalizing their support for Trump, questioning why some GOP members refer to Trump simply as “the nominee.”

“I think some people don’t want him to be the president,” Arpaio said. “They don’t even want to mention his name, and that’s sad. I hope today and this week everybody comes together and understands he, Donald Trump, is the one who’s running for president.”

Several Arizona lawmakers have shied away from formally endorsing Trump, most notably Sen. John McCain, who publicly sparred with Trump last summer after he questioned McCain’s status as a war hero.

McCain told Arizona radio station KTAR in May that he “always said I would support the nominee of the party.”

Ducey said that in regard to use of Trump’s name, people “should be able to speak for themselves,” but that the GOP has come together to make sure the party regains the White House.

“I think what people are united around is to see a Republican in the White House and to see Hillary Clinton back in the private sector,” Ducey said.

“As contested and difficult as this primary was, this general election is really an easy choice isn’t it?” Ducey said. He added that one candidate would grow the federal government, while the other would “turn Washington, D.C. upside down,” to applause from the crowd of delegates.