Convention delegates who had to use crowdfunding sites like GoFundMe said it was hard to ask strangers for money, but the conventions are too important not to. (Photo by Dave Dugdale/www.learningvideo.com via Creative Commons) 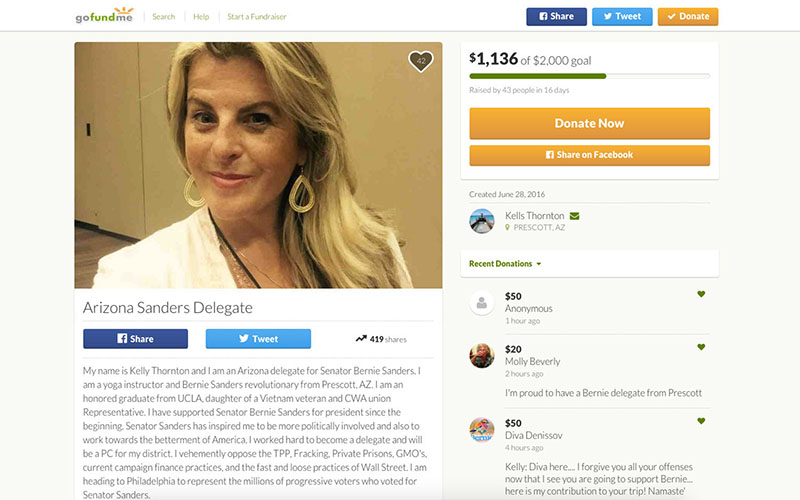 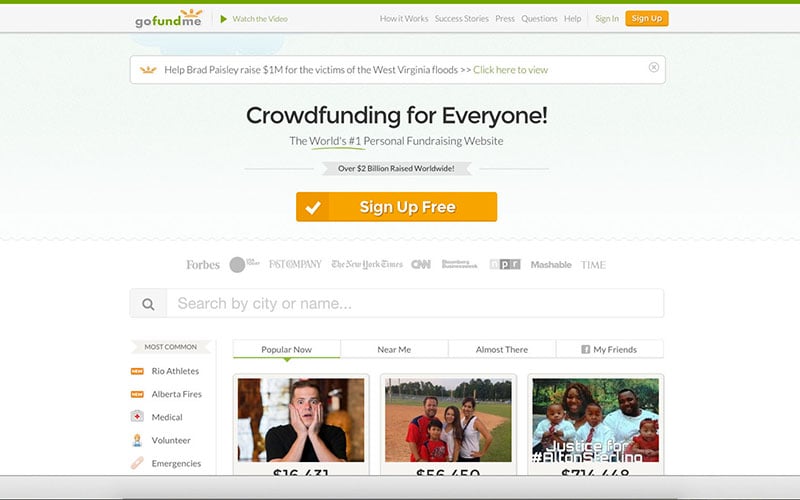 With no support from the parties, many Arizona delegates have turned to crowdsourcing sites like GoFundMe this convention season to foot the $3,000-$5,000 cost of attending the convention. (Photo courtesy of GoFundMe) 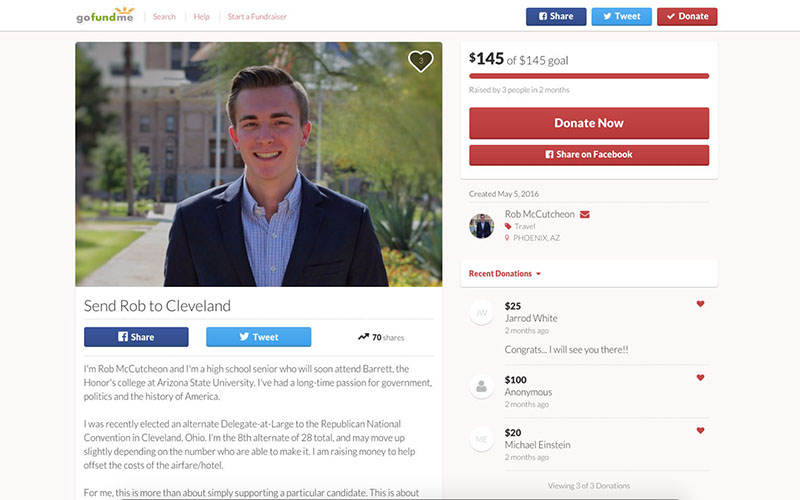 A political action group picked up much of Trump delegate Rob McCutcheon’s convention bill, letting him use GoFundMe for the rest. McCutcheon said he was pointed to the site by the Trump campaign. (Photo courtesy of GoFundMe)

WASHINGTON – Kelly Thornton, a Prescott yoga teacher and Democratic delegate for Bernie Sanders, said she “choked” when she saw the estimated $4,000 price tag to go to the party’s national convention.

But with neither the Republican nor Democratic parties financing their delegates’ convention trips, Thornton and those like her in both parties had to turn to crowdsourcing websites to finance trips to the conventions that start next week.

While they said it takes “a lot of humility” to ask for money online, most also said it was important to go, so they put out the call.

“A lot of people think we’re getting paid to attend the convention,” Thornton said. “We’ve had to create stuff out of necessity because we haven’t gotten the support from the DNC.”

Fundraising sites like GoFundMe are a relatively new tool for delegates this campaign cycle, but delegates described them as a useful way to get financial support for a project with a specific goal like theirs.

Republican delegate and Arizona State University freshman Rob McCutcheon used the website to get $3,000 he was told he would need for hotels, airfare, food and incidentals for the GOP convention. He said he has heard a lot of success stories about delegates using the site, which provides an “easy way to keep track of what’s coming in.”

“I knew that I wasn’t going to be able to do it on my own,” McCutcheon said. “It (GoFundMe) worked for what I needed.”

McCutcheon was going to raise the whole $3,000 online until a political action committee offered to pay some of his way. That allowed him to take the amount down to $145, which three GoFundMe donors were able to cough up.

“GoFundMe is a great site,” he said. “The experience I had with it was awesome.”

Two Tucson delegates pledged to presumptive Democratic nominee Hillary Clinton decided to do a joint online fundraising campaign. After contributions from family and friends covered some of their costs, Nathan Bacal and Joseline Mata set up a goal of $1,500 for the two of them. So far, they’ve raised $857.

“Fundraising together really took the stress out of fundraising,” Bacal said. “It’s a new fundraising tool, but it’s really useful when you have a goal like this.”

Not everyone has been satisfied with the experience of crowdsourcing convention money. Noel Searles, a Nevada GOP delegate pledged to presumptive nominee Donald Trump, said that while he can see the tool “growing, especially in the future,” his campaign was not as successful as he had expected.

Searles said the Nevada Republican Party estimated convention costs for its delegates at $5,000. After the Trump campaign encouraged delegates to start GoFundMe campaigns to get to the convention, Searles set one up with the goal of raising $800.

The Trump campaign did not immediately respond to multiple requests for comment.

With the convention beginning next week, Searles has reached his goal – but the last $210 was given as a loan, not a donation.

“I’ve had a little bit less success than I expected,” Searles said. “I’m doing my best to ask friends and family before asking total strangers.”

While some delegates have had success online, many were not satisfied with the state parties’ response to delegates need for financial assistance.

Thornton thought she could save money by finding housing through Airbnb, but was told by the Sanders campaign that she had to stay in the Arizona delegation’s hotel for safety reasons.

But she planned to attend “come hell or high water” – so she took to the Internet to raise the money.

“In my life I never thought I would do a GoFundMe,” Thornton said. “It requires a lot of humility.”

Bacal described the cost as “daunting,” and said that while he understands, he wishes the Arizona Democratic Party had worked to help delegates so they would not have to turn to crowdsourcing.

“I get it, it costs a lot to travel and they don’t want us to run out of money there,” Bacal said. “I just wish there was something where the party could help us out.”