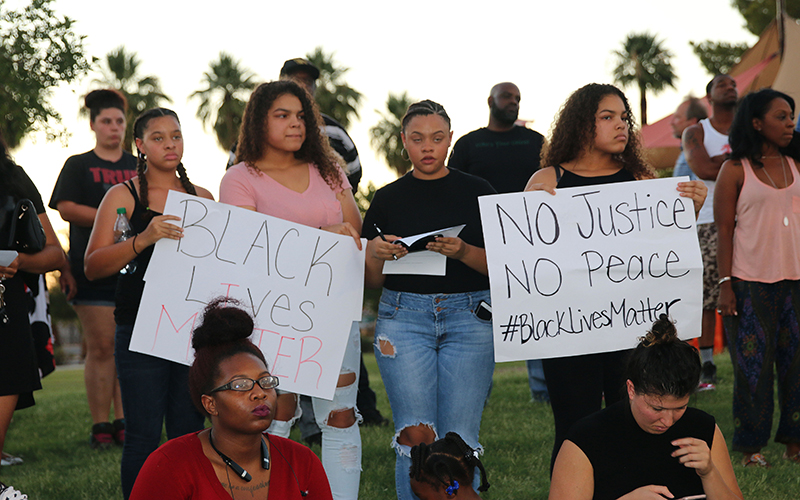 PHOENIX – Protesters plan to block off the intersection of 24th Street and Camelback on Friday, organizer Rev. Jarrett Maupin said at a community meeting in Eastlake Park.

Maupin would not give details of the protest, but said they wanted to bring attention to their concerns about police. The Phoenix Police Department said it is planning for any contingencies related to the proposed demonstration but would not comment further.

In an email that one company in the area sent to its employees, the company said the protest is planned to happen sometime between 11 a.m. and 8 p.m. The email, which was obtained by Cronkite News, goes on to say that the company expects a large police presence, that cameras are “placed on the rooftops,” and that it expects the intersection will remain open during business hours but there will likely be large traffic delays.

Maupin organized a protest on July 8 that drew several hundred to downtown Phoenix after the shootings by police of a black man in Louisiana and a black man in Minnesota. On Thursday, a black sniper in Dallas killed five officers and wounded nine others, saying he was angry about the shootings. Dallas police later killed him in a standoff.

The Phoenix protest was peaceful until the end when the crowd tried to move onto the I-10 freeway, and police used pepper spray and tear gas to disperse the crowd.

At the community meeting, Maupin proposed 12 reforms that he and other activists would like to see from the city. Maupin stressed that the most important change they would like to see is diversity training, and if these changes were not implemented, Maupin said he would continue to organize protests to put pressure on the city.

“The number one change that the city could make is keep their word,” Maupin said. “They already appropriated $250,000 for diversity training, they fired the consultant for some administrative error, or plagiarism and then they abandoned the diversity training.”

On Thursday, the city hired Oxnard Police Chief Jeri Williams to assume the chief’s role in Phoenix. She becomes the first black woman to lead the department.

Maupin discussed the use of body cameras for all officers and a suggestion that police misconduct investigations be done by an outside agency.

There were mixed emotions in the community meeting about the Black Lives Matter movement and the organized protests.

“I like the movement, I just think they should label it ‘all lives matter,’” said Paul Flores, a guest in the audience. “I think when you say black lives matter, it instantly draws a line between black and white.”

Overall comments throughout the crowd seemed to be in agreement to keep the protests peaceful, to show emotion but to not show public displays of violence.

“I just want to see people calm down and come together,” Flores said. “I guarantee you if every cop in the state decided to take three days off, we would just be begging them to come back. There’s good cops and there’s bad cops, but that doesn’t mean there’s not a problem there.”