Jose Eduardo Calzada Rovirosa, Mexico’s minister of agriculture, pointed to the growing trade between the U.S. and Mexico and said that relationship is only likely to grow in coming years. (Photo by Emily Zentner/Cronkite News) 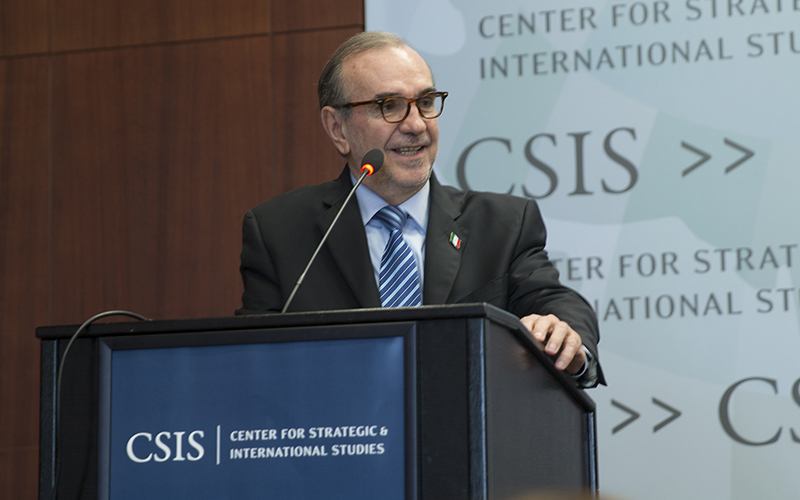 Carlos Sada, Mexico’s ambassador to the U.S., said the trade relationship between the two countries is more important now than ever during this “challenging time” for their relationship. (Photo by Emily Zentner/Cronkite News)

WASHINGTON – Mexican officials told a Washington audience Monday that there must be a strong trade relationship between the U.S. and Mexico in what they called a “challenging time” for the bond between the two nations.

Mexican Minister of Agriculture, Livestock, Rural Development, Fisheries and Food Jose Eduardo Calzada Rovirosa said the importance of the relationship between the two countries will only grow in the coming years.

Mexican exports increased by 12 percent in the first four months of 2016, Calzada said, as compared to the 7 to 9 percent growth in past years. That makes trade cooperation between the North American nations more important now than ever, he said.

“We cannot stop that,” Calzada said of the trade and travel across the U.S.-Mexico border. “It’s good for our people.”

Calzada also noted that about 6 million U.S. jobs rely on Mexican trade, saying that it would be irresponsible for either nation to cut that off.

Carlos Sada, Mexico’s newly minted ambassador to the U.S., was also on hand for the panel and stressed the importance of the relationship.

“There is $4 billion crossing our border every day,” Sada said. “There is a tremendous movement.”

Sada pointed to the so-called “Three Amigos” meeting between President Barack Obama, Mexican President Enrique Pena Nieto and Canadian Prime Minister Justin Trudeau last month in Ottawa, Ontario, as evidence of the significance of the free-trade relationship between their countries.

While open trade between the three countries is now an integral part of their economies, officials with the Center for Strategic and International Studies said that was not always the case.

Dan Runde, director of the center’s Project on Prosperity and Development, noted that in the 1980s, the idea of free trade between the countries was ridiculous to many. That was before the notion of a North American Free Trade Agreement gained traction.

Moving forward, Calzada said that the U.S. and Mexico need to continue improving their trade alliance. In addition to upping exports with improved technology, he said the U.S. and Mexico should look at the possibility of filling a void that could be left in the global economy by Britain’s exit from the European Union.

“Sometimes the problem for one is the opportunity for the other,” Calzada said.