White Mountain Apache Tribe Vice Chairman Kasey Velasquez said that the construction of the Miner Flat Dam was a “very important” need for the tribe to deal with their failing groundwater supply. (Photo by Emily Zentner/Cronkite News) 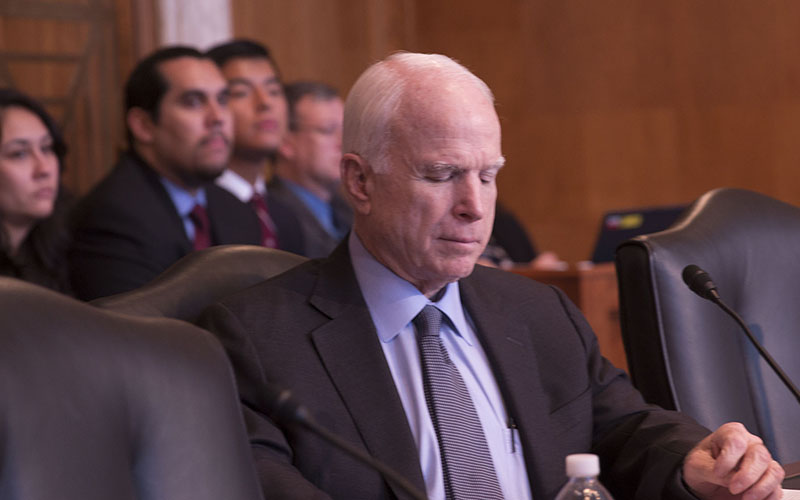 Sen. John McCain, R-Arizona, sponsored a bill that he said would “honor the commitment” the federal government made to help the White Mountain Apache Tribe build the Miner Flat Dam. (Photo by Emily Zentner/Cronkite News) 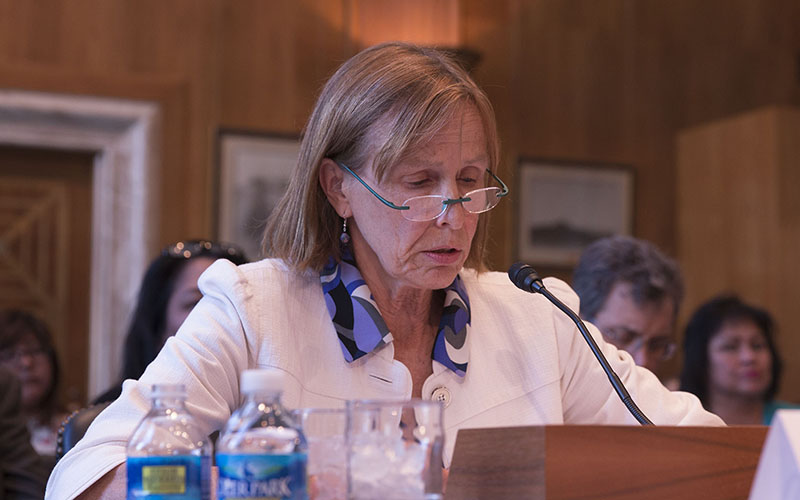 Letty Belin, an official with the Interior Department, said it needs more information before it can support McCain’s bill to give White Mountain Apache access to alternative funding for a dam. (Photo by Emily Zentner/Cronkite News)

WASHINGTON – The federal government needs to “honor its commitment” to Arizona’s White Mountain Apache and let the tribe use funds from a federal water-rights settlement funds to continue work on the Miner Flat Dam, lawmakers said Wednesday.

Sen. John McCain, R-Arizona, told a Senate Indian Affairs Committee hearing that the shift in funds is needed to help the tribe head off a “drinking water crisis.”

“The federal government made a deal with the White Mountain Apache six years ago that we would build the Miner Flat Dam,” McCain said in his opening statement. “I believe it’s pretty obvious that we have an obligation to meet the terms of the water settlement.”

That settlement included $126 million in funding for construction of a rural water system for the tribe, including a dam and reservoir, a water treatment plant, and pumping and distribution systems.

Under a bill introduced by McCain and fellow Arizona Republican Sen. Jeff Flake, the tribe would be allowed to tap into part of a separate $113.5 million fund that was to be used for cost overruns and related projects like fish hatcheries, watershed health and other items.

An Interior Department official at the hearing balked at the request, saying the department wants to see the dam finished but needs to see more details from the tribe.

“The Bureau of Reclamation needs to be provided with designs and estimated cost overrun,” said Letty Belin, senior counselor to the department’s deputy secretary. “We can’t support this legislation at this time.”

But Belin said the department plans to meet with White Mountain Apache officials as early as next week to discuss those details and hopefully come to an agreement on the funding.

White Mountain Apache Vice Chairman Kasey Velasquez testified that the dam is a critical issue for the tribe.

Velasquez, in Washington to testify on the bill, said the tribe’s groundwater supply is declining, and its only viable source for drinking water was the water that the dam would allow them to use from the White River.

“There is also natural arsenic in our groundwater,” he said. “We have to blend it to meet EPA standards.”

Velasquez testified that cost overruns on the dam project stemmed from concerns raised by engineers during the planning process about “seepage and stability concerns” in the dam’s foundation.

Despite the concerns raised by the Interior Department, Velasquez said he is hopeful that the project will be completed. It will have a simple but profound effect on the White Mountain Apache when it is finished, he said.

“As I testify before you today, I am mindful of an image and a hope that I’ve held for years,” Velasquez said at the hearing. “That I would be fortunate, and our tribal members be fortunate to live long to see a child or a adult … open a faucet on a kitchen sink to fill a glass of water – something they cannot do today.”