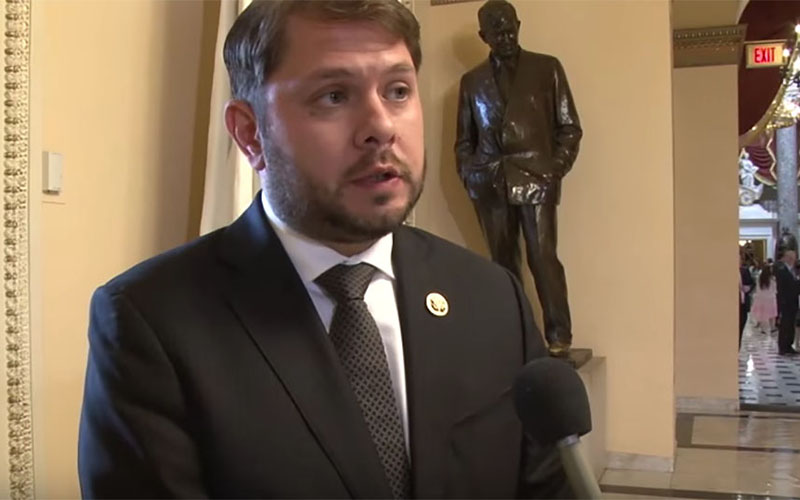 Rep. Ruben Gallego, D-Phoenix, outside the House chamber last week, where Democrats staged a sit-in in an effort to force the Republican leadership to bring a gun-control bill up for a vote. (Photo by Keshia Butts/Cronkite News)

WASHINGTON – Rep. Ruben Gallego, D-Phoenix, joined Arizona gun-control advocates on a conference call Wednesday to again call for stricter gun laws in the wake of the deadly mass shooting at an Orlando nightclub.

“Each of us are here today to say enough is enough,” said Gallego, who was joined by gun-control advocates and victims of gun violence on the call.

It came more than two weeks after a gunman pledging allegiance to ISIS walked into the Pulse nightclub in Orlando and opened fire, killing 49 people and wounding 53 before being killed by police, ending the largest mass-shooting in the U.S.

That sparked a frenzied week of activity in Congress, with the Senate advancing and then deadlocking on four gun-control measures before a bipartisan compromise – still pending – was introduced.

And in the House, angry Democrats stopped all business with a 26-hour sit-in in an attempt to force a vote on a “no fly, no buy” bill, similar to the bipartisan Senate proposal, that would ban people on the no-fly list from buying a gun.

“It’s not rocket science, it’s a bill and we take the bill and pass a law,” Gallego said. “What we need is Speaker (Paul) Ryan to support us.”

Ryan could not be reached for comment Wednesday, but a spokeswoman for the House speaker pointed to his comments last week on the likelihood of a vote on the no-fly, no-buy bill. They were not encouraging.

“If Democrats want a vote for a bill on the floor, there’s a way to get one,” Ryan said in a news conference last week. “It just takes 218 signatures and a petition and then they can have a vote, it is that simple.

“That’s how the House works. It’s a well-known process, but they’re not doing that,” Ryan said of the Democratic protesters. “They are not actually trying to get this done in regular order, no, instead they are staging protests.”

Those protests caused House leaders to adjourn the chamber Thursday, a day earlier than planned, for this week’s Fourth of July recess. The House returns Tuesday.

But Jennifer Longdon, the president of Arizonans For Gun Safety, said on Wednesday’s conference call that the sit-in was “not a publicity stunt, it was moral imperative.”

“It’s time for action and I call upon our elected leaders to reflect the overwhelming majority of Americans who believe in sensible reforms,” said Longdon, who was paralyzed in a shooting.

Mari Bailey, whose son was killed in a 2004 shooting, said voters will hold Republicans accountable.

“These politicians who are buckling to the corporate gun lobby snuck out of the people’s House at 3 in the morning to avoid a vote on life-saving bills,” she said of Thursday’s adjournment. “We’re going to hold them accountable.”

Gallego said he hopes for action when the House reconvenes Tuesday.

“When Congress returns to Washington, D.C. on July 5, I hope my colleagues will finally step up and listen to the majority of American people who agree that we should take steps to reduce violence in our communities,” he said on the call.

“Americans expect actions, not excuses. We need to act to save lives, honor the victims of gun violence, and keep our fellow Americans safe,” Gallego said.