Advocates rally at the Supreme Court in advance of its ruling striking down Texas restrictions on abortion clinics as an unconstitutional burden on a woman’s right to getting an abortion. (Photo by Meghan Finnerty/Cronkite News) 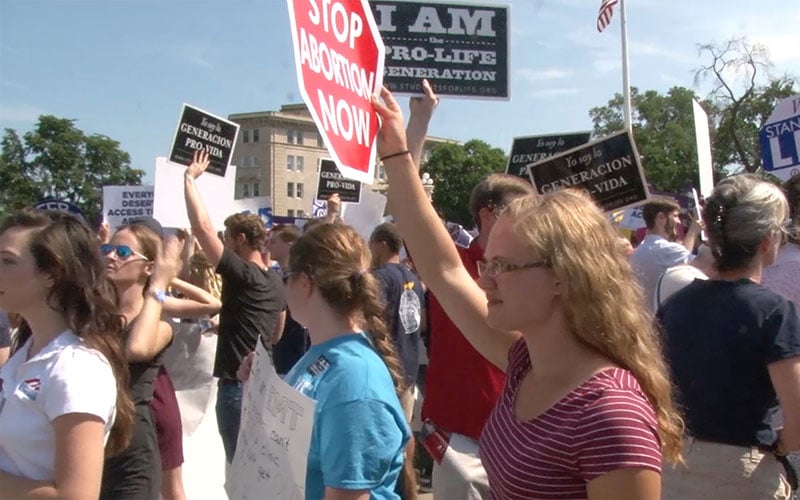 Pro-life supporters outside the Supreme Court expressed their dismay at the court’s rejection of Texas’ restrictions on abortion clinics, saying the decision would harm women’s health. (Photo by Meghan Finnerty/Cronkite News) 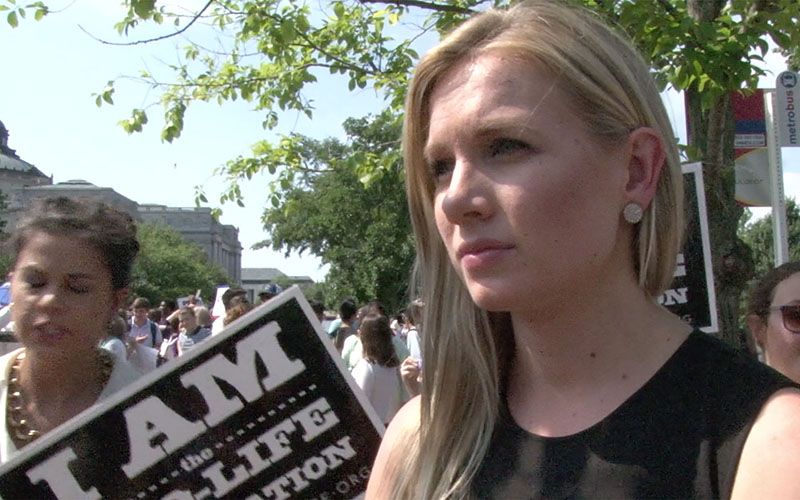 Pro-choice organizers who were gathered outside the Supreme Court shifted from arguing with pro-life groups to celebrating after the court rule against abortion restrictions in Texas. (Photo by Meghan Finnerty/Cronkite News)

WASHINGTON – Arizona pro-choice advocates hailed Monday’s ruling by the Supreme Court that said Texas’ restrictions on abortion clinics are unconstitutional, calling the decision a “significant victory for women in Arizona.”

The 5-3 ruling in Whole Woman’s Health v. Hellerstedt rejects Texas requirements that abortion clinic doctors have admitting privileges at a nearby hospital and that the clinics meet facility requirements for ambulatory surgical centers.

Justice Stephen Breyer, writing for the majority, called those regulations an “undue burden” on women seeking abortions, since they would have the effect of closing all but handful of clinics in the state.

Officials with the Arizona section of the American Congress of Obstetricians and Gynecologists said the ruling gives them hope for the fight against a similar admitting privileges requirement in Arizona.

“This ruling is very significant because, like Texas, we are one of the states that sees laws like these restricting abortion,” said Dr. Julie Kwatra, the group’s legislative chairwoman. “This is a significant victory for women in Arizona and women in the U.S.”

But critics called it a “heartbreaking day,” as the court overturned legislation they said was intended to protect women’s health.

“In its ruling today, the Supreme Court has made it abundantly clear that women need not be protected from dangerous conditions in abortion facilities,” said Rep. Matt Salmon, R-Mesa, in a statement from his office.

“Under the guise of protecting ‘choice,’ … the court has given legal cover to unsafe practices that actually endanger the lives of those undergoing an abortion,” his statement said.

In addition to the admitting privileges requirement, the Texas law mandated that abortion clinics comply with state standards for ambulatory surgical centers, including everything from a minimum number of nurses and doctors, to adequate building dimensions and a “one-way traffic” policy in clinic hallways.

Cathi Herrod, president of the Center for Arizona Policy, said in a prepared statement that the Texas restrictions were “commonsense safety precautions.” That was echoed by Lisa Stover, a member of Students for Life of America, who said Texas’ restrictions were about women’s safety, not abortion accessibility.

“Women lost today,” Stover said from amid the cheering and chanting crowds outside the court Monday. “Our Supreme Court justices have a duty to protect women and protect women’s health, and they did not do that today.”

But Justice Ruth Bader Ginsburg noted in a concurring opinion that abortion results in fewer deaths than many common procedures – including childbirth, liposuction, vasectomies and colonoscopies – that are not subject to the strict restrictions set forth in Texas’ HB 2.

“Given those realities, it is beyond rational belief that HB 2 could genuinely protect the health of women, and certain that the law ‘would simply make it more difficult for them to obtain abortions,'” Ginsburg wrote.

“These regulations aren’t at all about women’s health or safety,” Ligett said. “But to any everyday person it sounds like, ‘Oh golly, why not?'”

Kwatra agreed, saying that while there needs to be a system in place to get patients to a hospital if need be, there is “no medical advantage” to a clinic doctor having hosptial admitting privileges.

“There is another physician at the hospital that can take care of any complications that arise,” Kwatra said. “They (the clinic doctors) don’t themselves need to be the one to do it.”

Ligett said such restrictions “really have a detrimental effect on women living in rural areas.”

“When a woman has to travel great distances or endure waiting periods on top of traveling great distances, practically, it makes it (abortion) inaccessible,” she said.

It was unclear what effect the court’s ruling would have on Arizona’s law, but Ligett said Planned Parenthood hopes to work with the Legislature to overturn Arizona’s admitting privileges requirement for abortion clinics.

If that fails, she said, her group will move on to litigation against the state to get the law changed.

“Am I wildly optimistic about that approach given the makeup of our legislature? No,” Ligett said.

Calls to state Sen. Nancy Barto, R-Phoenix, and sponsor of the Arizona law, were not immediately returned Monday.