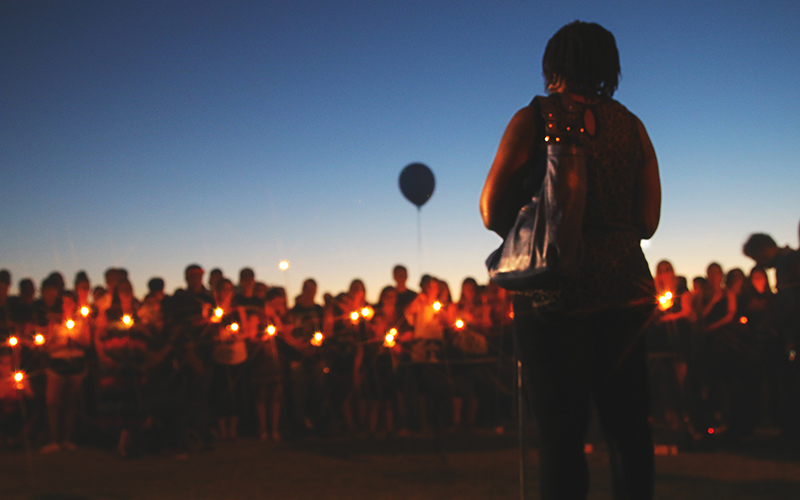 The aunt of Jason Josaphat speaks in his remembrance at the Mesa, Arizona vigil. (Photo by Christopher West/Cronkite News)

George Castillo leans into the microphone and starts telling his story. It’s a now familiar one, reaching from one night in an Orlando nightclub to this field in Mesa.

He texted Jason. He didn’t answer.

“And I sat there waiting.”

Castillo pauses for a moment, then says, “Jason, I love you. I only get the last time to say it, but I hope you hear me man, I love you.”

Castillo then disappears into the anonymity of the crowd that came to mourn Jason Josaphat, a former Mesa high school student who was among the 49 people a gunman shot to death in an Orlando gay nightclub.

Most mourners knew Josaphat. Many did not. But many still wept, and everyone held a candle at the vigil. Candlelight vigils have become as common as the tragedies that precede them, a way for communities to grieve as one.

In Arizona, candlelight vigils that connect friends and strangers include another one honoring the victims of the Orlando shooting and others for the Tucson shooting that injured Congresswoman Gabby Giffords and killed six others, the Yarnell Hill Fire that left 19 firefighters dead, and Prescott aid worker Kayla Mueller, who died from an airstrike while being held hostage by the Islamic State.

Strangers, friends help families
Dr. Andrea Bonior, a psychologist and columnist for the Washington Post, says that vigils can help those personally affected grieve after a tragedy, whether those who show up are friends or sympathetic strangers.
“There’s something very soothing about being in the presence of others who presumably understand your pain, or at the very least are there to empathize with it,” Bonior said.

Alexander Milo graduated from Skyline High School. He only met Josphat once during his senior year but came to the vigil to show support.
“I think this is definitely bringing us closer together, making us stronger as a community,” Milo said. Tyfanny Woods described Josaphat, amid tears, as a great person who was “always smiling.” She looked around at other Skyline graduates.
“We haven’t seen each other, like any of us, pretty much since we graduated and it sucks it has to be on a sad note. But it’s even more evident of how powerful Jason was in his day-to-day life,” Woods said.

Josaphat, who graduated from Skyline in 2014, was just 19 when he died. He was the second youngest of those killed in the Orlando attack.

Vigilant for a cause
Vigils can also represent a larger cause, whether political or social.

“The candlelight vigils are often not just about the person who died, (although) that certainly is a big part of it,” said Nancy Berns, a sociology professor at Drake University who researches how people cope after a loss.

“It’s also trying to make sense of what happened, and come together as a group to find solace in knowing that you are not alone in trying to figure this out,” Berns said. Family and friends of Jason Josaphat organized a vigil in his memorial. (Photo by Christopher West/Cronkite News)

Charissa Lucille, who runs Fem Static Zine, a feminist magazine based in Phoenix, organized a candlelight vigil to call attention to domestic violence after a man drove his estranged wife and three children into Tempe Town Lake in October. All five in the car died.

“When those family members were killed, I hadn’t seen any immediate action from anyone in the community,” Lucille said. “So I felt compelled to take that action right away and show the community that we’re not going to stand for this kind of violence in our area.”

Speakers and others who attended the June 15 candlelight vigil for Josaphat reflected a message of equality and acceptance, especially of the LGBT community. Most of those killed or the 53 injured at Orlando’s Pulse nightclub were gay and Latino.

Lance Motta-Vilensky, who drove 50 miles from Goodyear in the West Valley to Mesa, said he felt compelled to come as a “62-year-old gay man.” Dilin Smith was angered at people online saying that gay victims of the shooting “deserved it.”

John Goodie, who hosted the vigil, told the mourners at the Josaphat vigil he had privately supported LGBT rights but was “a little ashamed” he had never made those beliefs public. After the Orlando shooting, he went to the Sunday night vigil for the victims.

“I pray to God, that all over America…this tragedy that took place in Orlando is going to start a movement for understanding. To think deep inside of your heart, to accept your brother’s keeper,” Goodie said.
Phoenix resident Cesar Marin said he frequented Pulse nightclub, where the attack happened, “laughing and telling jokes.” He spoke about how the attack affected the LGBT community.

“Us in the gay community, we’re a family. And the first thing that went through my head was 50 of my brothers and sisters just got slain.'” Flowers and an American flag were placed at the entrance of Skyline Park, in remembrance of Orlando victim Jason Josaphat. (Photo by Christopher West/Cronkite News)

Needs linger after vigils end
Berns said candlelight vigils, which usually happen after a mass shooting or other violence draws national or international attention, soothe emotions in the immediate aftermath of violence. But families need support for months, even years.

“One other thing that can be difficult is after the public displays, candlelight vigils, other memorials, services, and then everything quiets down,” Berns said. “To have at least one or two people that are going to continue to walk that road for them is really important.”

Goodie expressed that sentiment at the end of the Mesa vigil, as he urged those who knew Josaphat to reach out to the family.

“Two months from now, if you text them or call them, that’s the most important phone calls that they will get,” Goodie said. “Because this shall pass, but what lives forever is when they receive a phone call two or three months ago after he is buried, after everything is done. That’s priceless.”