Valentin Hernandez, vice president of business attraction at the Arizona Commerce Authority, networks with other business owners at the summit. (Photo by Wafa Shahid/Cronkite News) 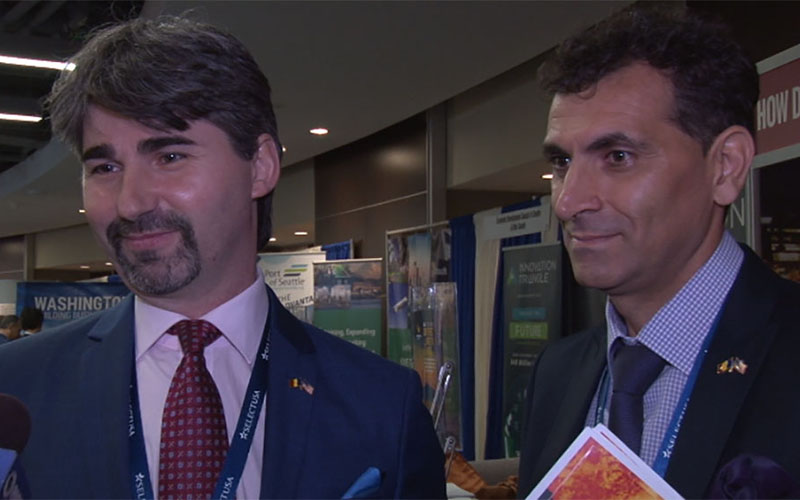 Romanian business owners Costel Batista, right, and Adrian Iacobus talk about what attracted them and their start-up company to Surprise. (Photo by Wafa Shahid/Cronkite News) 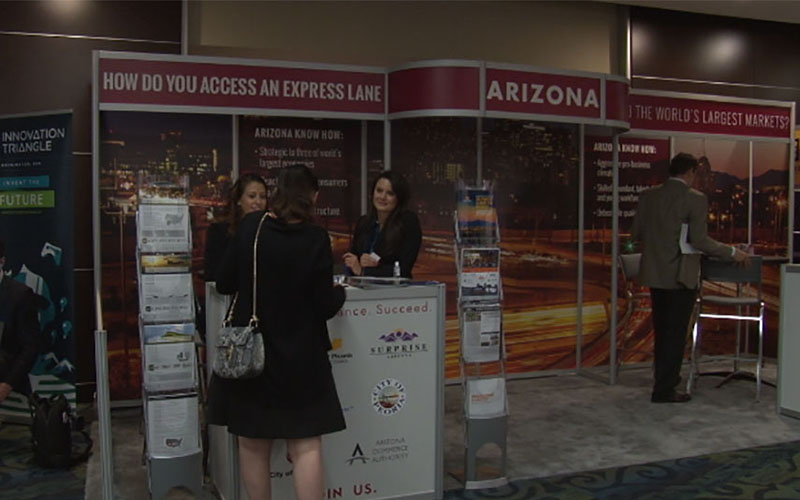 WASHINGTON – They came from the state and from several cities, but business leaders at an event here this week had a common goal – convincing foreign business owners that Arizona is the right place for them.

Officials from the Arizona Commerce Authority, the Greater Phoenix Economic Council, the Salt River Project and the cities of Gilbert, Surprise and Peoria were among 2,500 exhibitors pitching their markets to foreign investors at the annual SelectUSA Investment Summit.

Arizona officials at the event pitched the state’s low regulatory and tax burdens, its climate and – like any good business pitch – location.

“Logistics is very good from the Phoenix area. You have I-10 that goes coast to coast and access to a lot of different markets further east,” said David Valenzuela, the chief business attraction officer for Peoria.

“Arizona is still a low-cost option relative to California and other states that we compete with for their business,” said Valentin Hernandez, vice president of business attraction at the Arizona Commerce Authority, who was in town for the event sponsored by the Commerce Department.

Commerce said millions of U.S. jobs are directly produced by foreign direct investment, and international companies account for more than one-fifth of all U.S. goods exports. Commerce Secretary Penny Pritzker called SelectUSA “the connective tissue between foreign investors and the American market, facilitating more than $22.5 billion in investments during the past five years.”

Those connections paid off for the Greater Phoenix Economic Council, which started conversations last year with Swiss company, the Kudelski Group, that eventually led to the company announcing this month that it plans to open its U.S. headquarters in Phoenix.

More than 70 foreign markets were represented at the summit, which featured addresses by Pritzker, President Barack Obama, Vice President Joe Biden and Secretary of State John Kerry, among others.

According to the Bureau of Economic Analysis, foreign direct investment totaled $78.3 billion in the first quarter of 2016. In Arizona, investment by foreign firms supports 84,300 jobs, according to the BEA, which said the state ranked 26th in the nation for total number of jobs at U.S. subsidiaries.

That investment can be seen in Surprise, where the city’s director of economic development said it has one program caters directly to foreign direct investment.

“Surprise offers a program where companies can come in free of cost, test the waters, that’s really important for start-ups,” said Jeanine Jerkovic, the Surprise official. “International companies, when they cross the border, we find that they really behave like start-ups.”

“We need a good approach, the right people to understand it and to implement it, and we think that in Arizona, in Surprise City, we’ve already found those people,” said Iacobus, who was at the summit this week.

Hilary Hirsch, economic development administrator for Gilbert, said sometimes the pitch just requires giving potential investors the basics and filling in the blanks in their picture of Arizona.

“If you’re talking to the Chinese, they don’t really know a whole lot about the Southwest, so a lot of that is just educating them on where we are geographically in the U.S. and what makes us unique as a state,” Hirsch said.

But Jerkovic said that even though there are differences, the foreign investors are also a lot like their American counterparts in some ways.

“Their energy, their excitement, and really their focus, is something that really embodies a lot of the American spirit,” she said.