Rep. John Lewis, D-Georgia, calls on fellow lawmakers to “occupy this house” in an effort to force House leaders to allow a vote on gun restrictions. (Photo from CNN Newsource) 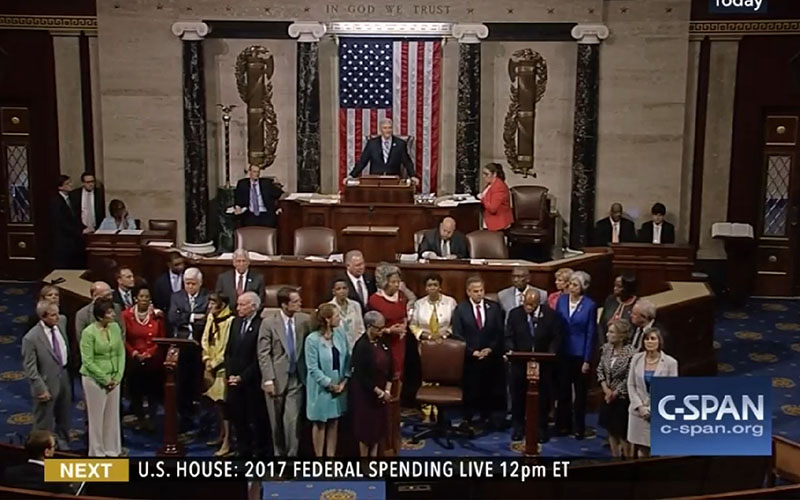 House Democrats gather on the floor behind Rep. John Lewis, D-Georgia, before Democrats began a sit-in in an effort to force a vote on gun-control measures. (Photo courtesy of C-SPAN)

WASHINGTON – House Democrats, chanting “no bill, no break,” shut down the chamber with a sit-in Wednesday in an effort to force the Republican leadership to allow a vote on stalled gun-control legislation.

Scores of Democrats, including all four from Arizona, followed the lead of civil rights veteran Rep. John Lewis, D-Georgia, who called on lawmakers to “occupy the floor of the House” and demand a vote before Congress leaves on its summer recess in two weeks.

The action comes 10 days after a shooting at an Orlando nightclub left 49 dead and 53 injured, and just days after the Senate deadlocked on attempts to get votes on a handful of gun restrictions.

“I have placed my fingers in the bleeding wounds of victims who were shot near to death,” said Rep. Raul Ruiz, D-California, a former emergency room doctor and one of the protesting lawmakers on the House floor Wednesday.

“I’m here to stand up for the wife who was shot and killed by her drunken husband,” Ruiz said.

The sit-in began at 11:25 a.m. and was still going late Wednesday evening.

House Speaker Paul Ryan, who declared the House in recess after the Democratic takeover, told CNN that the sit-in was “nothing more than a publicity stunt” by the Democrats.

Rep. Paul Gosar, R-Prescott, went further, accusing Democrats of trying to divert attention from the real problem – that “President Obama and his allies have utterly failed to stop ISIS and keep the homeland safe.”

“Shamefully, they are attacking law-abiding citizens and groups like the NRA instead of radical Islam,” Gosar said, in a statement provided by his office. Omar Mateen, the Orlando gunman who was killed by police in that shooting, had pledged allegiance to ISIS.

But Democrats appeared to be settling in for the long haul, giving speeches – that had to be broadcast by members via social media, after House leaders order C-SPAN cameras and microphones shut off – and encouraging each other. They sat crowded together in the well of the chamber, with Rep. Nora Torres, D-California, bringing out a blanket to lay over her legs as she sat on the carpet.

Scores of House members were joined by a handful of Democratic senators, including Senate Minority Leader Harry Reid, and Sen. Barbara Boxer, D-California, who threw snacks to members.

The House members are trying to force a vote on a “No Fly, No Buy” bill that would ban people on the no-fly list from buying guns and require stricter background checks for firearms sales.

Rep. Debbie Wasserman Schultz, D-Florida, read a letter from former Rep. Gabby Giffords, D-Tucson, who resigned from Congress in 2012 after she was shot in the head during an event in Tucson.

“We must not accept a world that will be the product of inaction in Washington,” Giffords wrote. “Speaking is difficult for me, but I haven’t been silenced.”

Schultz cried as she read the letter in the House, urging members to “stand strong until there are no more Gabbys, no more Orlandos, no more Auroras.”

Arizona Democratic Reps. Raul Grijalva of Tucson, Ruben Gallego of Phoenix, Ann Kirkpatrick of Flagstaff and Kyrsten Sinema of Phoenix joined the demonstration, which Gallego live-streamed on his Facebook page.

Grijalva called out House leaders on the floor for what he called a lack of appropriate response after events like Orlando and Giffords’ 2011 shooting.

“From Tucson to Orlando and all that accompanied those massacres we all know about, this House and the Republican leadership did nothing,” Grijalva said. “A moment of silence, and then back to nothing.”

Rep. Alan Grayson, D-Florida, used his time to read the names and ages of the 49 victims killed in the Orlando attack.

While Democrats had accused Ryan of “hiding in his office” to avoid their call for action, the speaker did gavel the House back into session late Wednesday night for a raucous 30-minute voting session on an unrelated measure. Democrats shouted and waved signs the entire time before the House recessed again at 10:30 p.m. EDT and the sit-in resumed.

House Minority Leader Nancy Pelosi said earlier in the day that Democrats will stay in the chamber until Republicans agree to a vote on the gun legislation, no matter how long it takes.

“How long will we stay?” Pelosi asked. “Well, that’s totally up to them.”