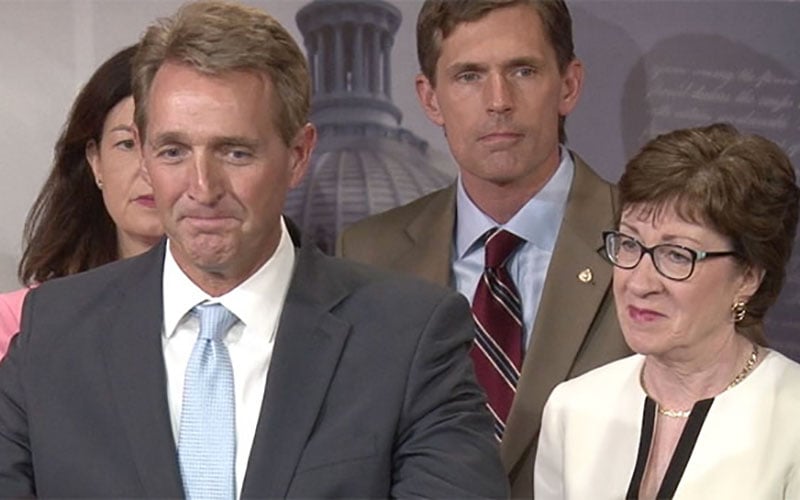 Sen. Jeff Flake, R-Arizona, said that unlike partisan gun measures that were designed to faiil to make political points, the bipartisan ‘no fly, no buy’ measure is designed to pass. (Photo by Keshia Butts/Cronkite News) 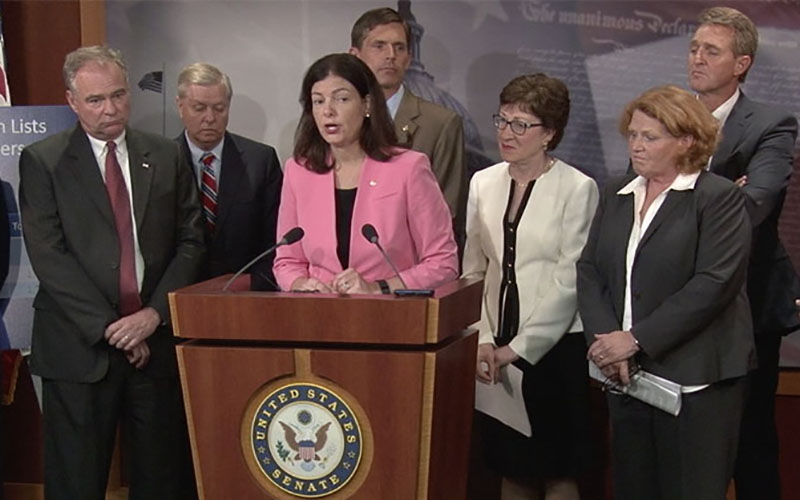 A bipartisan group of senators hopes compromise legislation to bar gun sales to people on the FBI’s “no-fly” list can attract enough support to get a Senate vote. (Photo by Keshia Butts/Cronkite News)

WASHINGTON – One day after efforts to advance gun-control measures in the Senate collapsed in partisan fighting, a bipartisan group of senators unveiled a compromise Tuesday that they hope can get a vote and keep guns out of the hands of terrorists.

Sen. Jeff Flake, R-Arizona, joined seven other lawmakers – three Republicans, three Democrats and an independent – to unveil the “no-fly, no-buy” bill that is aimed at prohibiting gun sales to the thousands of people on the federal no-fly list and a secondary screening list.

The latest proposal comes a little more than a week after a shooting at an Orlando nightclub that left 49 people dead and 53 injured at the hands of a gunman who claimed allegiance to ISIS. It is the largest mass shooting in U.S. history.

The compromise measure also comes one day after four gun-control measures failed to get enough support to come up for a vote by the full Senate, with each party essentially blocking the other’s proposals.

Each party had proposed bills calling for more strict background checks on gun buyers and trying to prohibit sales to known or suspected terrorists. But Republicans said the Democratic proposals were too sweeping and would have violated the constitutional rights of gun buyers, while Democrats said the GOP bills would have done little to solve the problems they targeted.

Sen. Susan Collins, R-Maine, said the compromise measure she proposed Tuesday aims to split the difference. It uses a smaller list of suspected terrorists than the Democratic plan Monday, and includes guarantees that U.S. citizens and green card holders who are denied a gun for being on a watch list have a court appeal and can recover attorney fees if they win.

Collins said the bill’s “goal is simple and straight forward – we want to make America safer.”

Flake and others at Tuesday’s news conference to release the proposal said it just makes sense.

A statement from Americans for Responsible Solutions, the gun-violence prevention organization founded by former Arizona Rep. Gabrielle Giffords and her husband, former astronaut Mark Kelly, said the Collins’ proposal is “far from perfect and would require work,” but welcomed the proposal nonetheless.

“This is a good faith effort by Senator Collins and others to close the loophole that lets terror suspects legally get guns,” said Americans for Responsible Solutions Director Peter Ambler in the statement. “At this stage, the most important thing is that Senate Republicans show they can produce more than a handful – or two handfuls – of votes.”

But a statement from the National Rifle Association repeated charges that the Collins bill would be unconstitutional.

“Unfortunately, Senator Collins and others are focusing their efforts on unconstitutional proposals that would not have prevented the Orlando terrorist attack,” said NRA Executive Director Chris W. Cox in a statement released by the group.

“The American people want Congress to stop playing politics and pass policies that will keep them safe from terrorists,” the statement said.

But Flake said that unlike the earlier partisan proposals, which were designed to fail so each side could make its points, the latest proposal is designed to succeed.

“What you see here is an effort not to have a vote that will simply allow each party to use a cudgel to beat the other party with, but rather to have something that will actually pass,” Flake said.