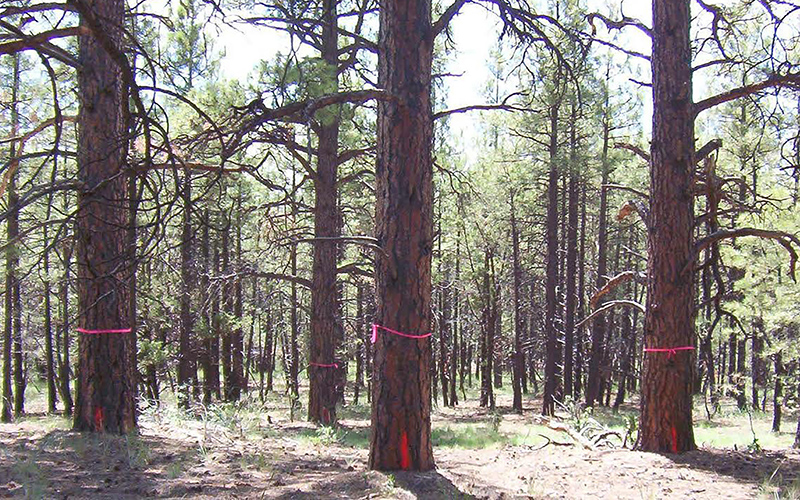 Large trees marked to be spared ahead of a forest restoration project near Williams. Unmarked trees are cleared to help prevent the spread of wildfire should one break out. (Photo courtesy of U.S. Forest Service) 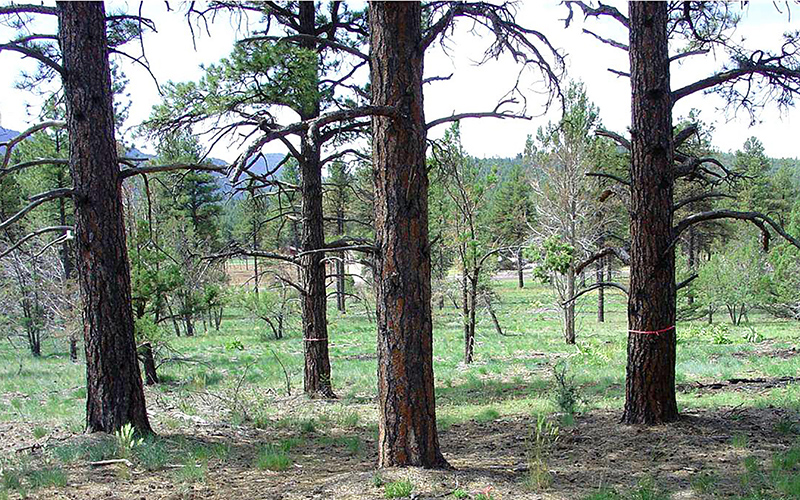 A forest near Williams after forest thinning has removed smaller trees – depriving forest fires of potential fuel – as part of a wildfire prevention project. (Photo courtesy of the U.S. Forest Service)

WASHINGTON – A Flagstaff program that aims to prevent wildfires by thinning the forest surrounding the city was named a national “best in class” Tuesday in a report on use of natural defenses against catastrophes.

The report by the National Wildlife Federation cited Flagstaff’s wildfire prevention program as one of 12 in the country recognized for the practice of using natural resources to help avert damage from floods, fires, coastal erosion and storms.

“If a fire were to ignite west of Flagstaff today, these treatments would have a measurable impact,” Vosick said at a Capitol Hill briefing with representatives of four other projects hailed in the report.

Flagstaff Mayor Jerry Nabours echoed Summerfelt, saying U.S. Forest Service officials had pointed out to him how unusual it was for a city to pay for prevention projects on federal and state lands.

“These are areas of the forest that are critical to the city,” Nabours said Tuesday. “We stepped up and said, ‘Hey, we’ll take care of these areas.'” 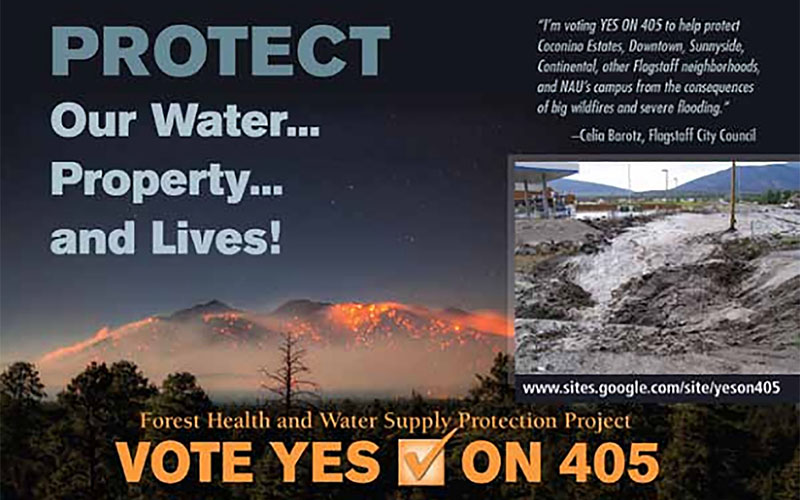 An ad encouraging support for the 2012 bond issue to fund a Flagstaff program for forest management on federal and state lands around the city. (Photo courtesy NAU Ecological Restoration Institute)

The Flagstaff Watershed Protection Project began removing small trees in a 10,000-acre target area of forest in the watersheds above Flagstaff in 2012.

By removing potential fuel for wildfires, the project helps prevent the spread of fires in the forests around Flagstaff, which in turn has helped to prevent the flooding from runoff that often follows a wildfire, Vosick said.

In the panel discussion at the briefing, Vosick said that soils often become “hydrophobic” after a wildfire, which can cause intense flooding in Arizona’s heavy monsoon season.

Flagstaff experienced this firsthand after the Schultz Fire in 2010 caused major flooding to some areas of the city. The flooding turned a $13 million fire recovery project in the city into a $147 million one because of the damage from the flooding, Vosick said.

This event caused some Flagstaff residents to call for fire protections in the watersheds above the town, as they considered how bad the damage might have been if it had been those lands that burned and flooded, sending water cascading into the streets of Flagstaff.

The National Wildlife Federation praised this particular aspect of Flagstaff’s program, saying that the city was doing unique work to break the “fire-flood cycle.”

The program also sparked the interest of residents of other parts of Coconino County, as residents of nearby cities and towns began contacting the Flagstaff Watershed Protection Project about the possibility of a countywide program.

“After the bond passed, we got people outside the city asking when the county was going to do something similar,” Vosick said. “That’s really surprising in such a fiscally conservative state.”

While the program is limited for now to Flagstaff, Vosick said supporters hope to expand in the next year to provide similar treatments on 50,000 acres along the Mogollon Rim in northern Arizona.