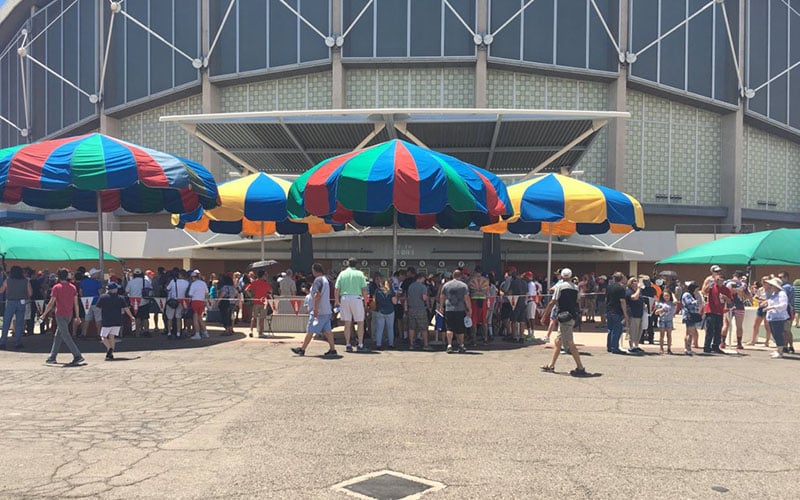 The crowd starts to build up as attendees wait to be let into the Trump rally. (Photo by Selena Makrides/Cronkite News)

They bought caps, shirts and downed bottled water before arriving long before Trump was scheduled to speak. The first fan was in line at 2 a.m., and others started lining up to get into Arizona Veterans Memorial Coliseum hours before it opened to crowds at noon.

Hats are $25 a piece at #Trump rally Sellers want to #MakeAmericaGreatAgain pic.twitter.com/fDMGCwrcWi

The scene in front of the entrance was largely peaceful, with few, if any, protesters at the fairgrounds before the rally started at 4 p.m. Instead, the protests were a few miles away at Encanto Park, marked by an giant Trump inflatable and brief but intense confrontation between a Trump supporter and protesters.

Supporters said they came to the rally because they appreciate Trump’s straightforward way of speaking, unlike most politicians.

Many also said they support many of Trump’s policies, which include building a wall on the Mexican-American border to halt illegal immigration and a proposed ban on Muslims being allowed into the country.

Young and old gathered to come see Trump, including Alex Gallagher who wasn’t even old enough to vote.

Alex Gallagher is 17. He can’t vote for #Trump this election, but says he will vote for him for his “second term”. pic.twitter.com/KkWIt9E9Or

About 50 people gathered Saturday morning near Encanto Park to voice their opposition to Trump.

#Trump inflatable at Somos America event getting a lot of honks. pic.twitter.com/kwqWlosYuL

The protest was organized by the Somos American coalition, an immigrants rights advocacy group.