Experts say social media posts of victims during the Pulse nightclub attack brought a raw emotion to the event, but also humanized and brought empathy to the shootings. (Photo by Melina Sampaio Manfrinatti via Creative Commons) 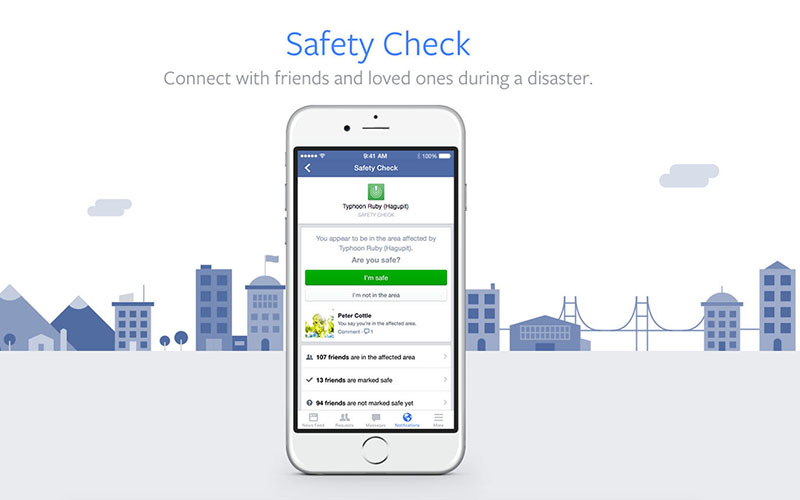 Facebook’s Safety Check feature, which lets users check in as safe after a crisis in their area, was deployed in the U.S. for the first time after the Orlando shooting at the Pulse nightclub. (Photo from Facebook.com)

WASHINGTON – When news broke Sunday of the mass shooting at an Orlando nightclub, many people took to their phones to share their thoughts during the attack – including the victims inside the club.

The Pulse nightclub shooting is not only the deadliest in U.S. history – 49 people were killed and 53 wounded – but experts say it is also the first time that victims provided a real-time, first-hand record of what happened.

In the days since the shooting, images, videos and even text messages from the victims have been showing up online documenting the victims’ last moments.

“When it comes to this, the club photos and videos have special meaning because we see the last moments of the victims,” said Sherri Williams, a communications professor at Wake Forest University. “People can feel some of the fear these people felt in the moment.”

Janet Johnson, a communications professor at the University of Texas at Dallas, said the texts and social media posts from inside the attack bring a more impactful perspective to the public.

“We’re getting the story from the individuals, it’s not just the media’s take on it,” Johnson said. “This is the first time we’ve heard from the people inside.”

Williams pointed to the emotional impact of the texts that one of the victims, Eddie Jamoldroy Justice, sent to his mother during the three-hour attack while he was trapped in the bathroom of the club.

“That was a story I saw recycled and reposted everywhere on social media, with people talking about how heart-wrenching it was to see,” Williams said.

Psychologist Patricia Farrell agreed that Justice’s texts were among the most emotionally affecting pieces of news to come from the attack.

“When someone is texting their mother, ‘He’s here, he’s coming, I’m dead,’ there’s nothing worse than that,” Farrell said. “It seemed to be a rather dreadful moment-by-moment recall.”

Another inside look at the attack came from victim Amanda Alvear, who was posting videos and photos on Snapchat documenting her night out. In the final video, gunshots can be heard over the music.

Alvear and Justice both died in the attack by gunman Omar Mateen, who was killed by police at the end of the standoff.

While first-hand accounts like this are upsetting, Fordham University communications professor Paul Levinson said they allow the public to feel more empathy in the wake of the attack.

“This is a healthy development,” Levinson said. “It’s more of a direct connection. People are more profoundly affected when they see this.”

While the new reality of victims reporting the details of an attack may help the public be more empathetic, several experts said that this technology also helps victims in the moment as well.

“It’s just a different way for victims to connect with their loved ones,” Williams said. “It allows them to say goodbye.”

The Orlando attack also marked the first time that Facebook deployed its safety check feature in the U.S. The tool – which allows people to let friends know they’re safe after a crisis – had been used many times outside of the country for natural disasters and events like November’s attacks in Paris.

Aside from giving people the ability to learn about the attack through the victims’ stories rather than through authorities, Levinson believes that victims’ posts will also keep the emotions surrounding the shooting present for much longer.

“We tend to go on with our lives,” Levinson said. “Social media is keeping what happened in Orlando in the forefront.”