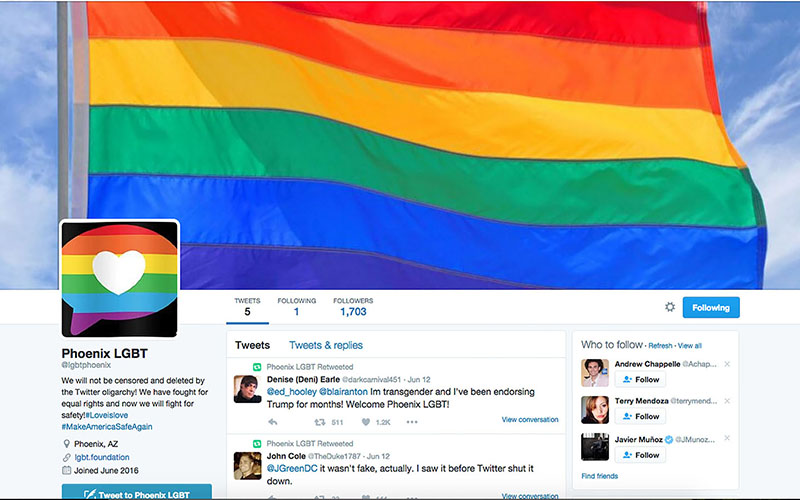 The endorsement of Donald Trump by Twitter site @Igbtphoenix after the Orlando shootings caused confusion for Phoenix Pride, an unaffiliated LGBT organization. (Photo from twitter.com)

Instead, Logan was fielding questions from people who were concerned about the organization’s apparent endorsement of likely Republican presidential nominee Donald Trump.

The confusion started with a tweet Sunday from a Twitter account called @Igbtphoenix, which said after the shooting that left 50 dead at an Orlando gay nightclub that it was “officially endorsing Trump.”

Its handle, @Igbtphoenix with a capital I, appears to a casual viewer as @lgbtphoenix on Twitter. The account, which appeared to have been just created on Sunday, is in no way affiliated with Phoenix Pride and it doesn’t claim to be.

But Logan said that didn’t keep concerned followers of Phoenix Pride’s official accounts – @PhoenixPrideAZ and @PHXPrideLGBTCtr – from asking about the @Igbtphoenix endorsement.

We wanted you to be the first to know, after this horrific attack, we’re officially endorsing Trump. Enough is enough.

Logan described the other account’s tweet as “opportunistic” and “definitely in bad taste,” saying it confused and worried people who were reaching out to Phoenix Pride in an already upsetting situation.

“This is a blatant attempt to confuse people,” Logan said. “It makes people think an organization they trust and rely on endorsed a candidate. It seems very politically motivated.”

Logan said that as a 501(c)(3) tax-exempt nonprofit, Phoenix Pride cannot lobby or endorse candidates. But a good number of followers still thought the @Igbtphoenix account and the endorsement were related to Phoenix Pride, she said.

“People were definitely worried about it,” Logan said. “I’ve been responding to tweets asking, ‘Is it really true that you would endorse Donald Trump? I thought he didn’t like gay people.'”

Comments on the @Igbtphoenix page were divided between people asking if the site was real, and Trump supporters hailing its position.

“Sometimes … people will post something that’s so ludicrous – as in a LGBT group endorsing Donald Trump – that it’s expected everybody will know it’s false,” Thornton said in an email.

“Sadly, that level of media literacy is not widespread ? many people take things at face value,” she said.

Trump, who during his campaign has called for a ban on Muslims entering the country, tweeted out many times after the attack. In several, he called on President Barack Obama and likely Democratic presidential nominee Hillary Clinton to use the term “radical Islamic terror.”

“What has happened in Orlando is just the beginning,” Trump tweeted Sunday. “Our leadership is weak and ineffective. I called it and asked for the ban. Must be tough.”

The Trump campaign and did not immediately return requests for comment.

The shooter in the Orlando attacks reportedly told a police dispatcher he was motivated by ISIS, and the FBI had investigated him for possible terrorist sympathies. Obama said Monday that while authorities were “still looking at all the motivations of the killer,” the case was being treated as a terrorist investigation.

The @Igbtphoenix account has sent out three tweets since it appeared Sunday, all about the Orlando shooting. It had garnered about 1,300 followers as of Monday, many of whom are Trump supporters.

The account was also linked to a Manchester, England, LGBT group, which was listed in @Igbtphoenix’s bio. But that group, the LGBT Foundation, tweeted out that it has no affiliation to the @Igbtphoenix account.